Caregiving: at the intersection of ministry, charity and love

Caregivers share their stories of struggle, joy as they care for their loved ones 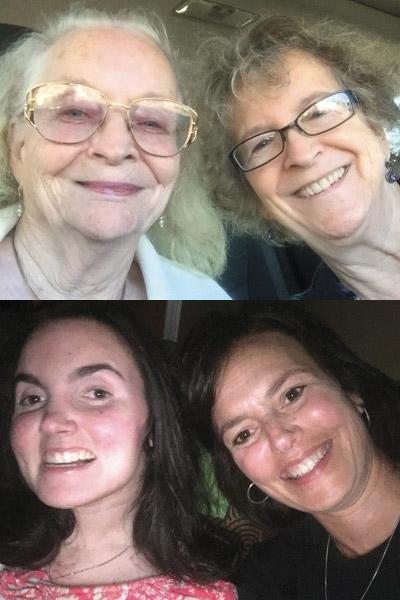 Photos courtesy Alice Nahas and Patti Drake
Alice Nahas (upper photo, right) smiles with her mother, Alice Johnson, before a trip to Fort Smith from Paris in 2015. Nahas, a parishioner at St. Joseph Church in Paris, cares for her mother who has Alzheimer’s. In the lower photo, Patti Drake (right) and her daughter Mary take a selfie while watching the Razorbacks on T.V. last year. Patti and Jim Drake have been caregivers for their daughter since a 2009 car wreck.

Photos courtesy Alice Nahas and Patti Drake
Alice Nahas (upper photo, right) smiles with her mother, Alice Johnson, before a trip to Fort Smith from Paris in 2015. Nahas, a parishioner at St. Joseph Church in Paris, cares for her mother who has Alzheimer’s. In the lower photo, Patti Drake (right) and her daughter Mary take a selfie while watching the Razorbacks on T.V. last year. Patti and Jim Drake have been caregivers for their daughter since a 2009 car wreck.

Every night, Alice Nahas tucks her mother into bed. She has two stuffed animals, a big bulldog and a small reindeer, perched at her feet. With the bed rails up and the blankets tucked snug on her sides, “I’ll say, ‘I love you a bushel and a peck and a hug around the neck.’ And she’ll say, ‘I loved you first.’ I’ll tell her she loved me first and she’s loved me the longest.”

Alice Johnson, 89, was diagnosed with Alzheimer’s in May 2008. That year, Nahas, of Paris, joined millions around the United States who take on caring for a loved one. According to the 2015 “Caregiving in the U.S.” report by the National Alliance for Caregiving and AARP, about 43.5 million caregivers provided unpaid care to an adult or child within that year.

Caregiving is hard, but understanding it to be a ministry can make a spiritual difference in the lives of caregivers and those who need care.

“You get burnt out if you feel like you can change the world as a caregiver,” said Father Joseph Chan, a former physician and associate pastor at the Cathedral of St. Andrew in Little Rock. “You need to allow Jesus to work on that person through you as a caregiver. If you do that, then you can acknowledge your own limitations.”

Nine years ago, Jim and Patti Drake were thrust into the reality that their 17-year-old daughter, a bright young basketball player at Mount St. Mary Academy in Little Rock, would require constant care the rest of her life. Mary was involved in a head-on collision, causing traumatic brain injury.

Now 25, she is receiving treatment at TIRR Memorial Hermann in Houston that will hopefully open up new experiences for her — she was recently able to try a little sip of Dr. Pepper, something unheard of since Nov. 22, 2009.

In Houston, Mary typed to her mother “I am happy” that she was living at home with her parents and “yes” when asked if God was present in her life.

It might seem like a cruel reality and though Patti Drake said they and their two sons wondered “why Mary” at first, “I am able to see God has a plan and it’s so much bigger than I would have imagined.”

Mary cannot talk or walk and has been tube-fed since the accident, but is aware of what’s going on around her. With assistance, she can type on a special keyboard.

“There’s no call button. Really that’s such a reality — ‘Oh, my gosh this is all on me’,” after leaving the hospital. “… There was never a question of who is going to take care of Mary,” Patti Drake said.

Each day, Mary wakes up about 3 or 4 a.m. and if it’s a “good night” only once, to be shifted in bed, Drake said. She’ll have breakfast around 6 a.m., nap at 9 a.m. Her mother will then give her a shower or sponge bath, dress her, make sure she’s fed and hydrated throughout the day. They do stretches to keep “all of her joints moving” and watch a movie or television in the evenings.

“People can try to tell you what it’s like but until you really experience it and get your own routine and figure out what normal is for you and what your routine is, you have to experience it to know what it’s like,” she said. “In the beginning, I thought ‘If Mary can’t do it I’m not going to do it,’” adding now, “I’ll get up and go for a walk four mornings a week at 6 a.m.” with a friend and devote quiet time to prayer.

Drake said the family is blessed with people in their lives willing to help.

“I think families that are trying to be caregivers, maybe not abandon the rest of the family, but (they) put them on the back burner,” Drake said. “Jim and I are very close and she knows that and I know she wants us to continue our marital relationship and our relationships with our boys.”

Through their Miracles for Mary Foundation, the family is also able to help other families emotionally, spiritually and financially who are faced with traumatic brain injury.

“Find the joy in each day. I was told a long time ago that ‘joy’ stands for ‘Jesus, others, yourself.’ Yes we need to take care of ourselves but true joy comes in service,” she said.

Mary’s advice for others who find themselves suddenly being cared for was simple: “Never give up.”

Alice Nahas and her mother share more than the same first name.

“She was kind of my best friend,” said Nahas, 72, a parishioner at St. Joseph Church in Paris. “People when they see her they’ll say she’s so pretty, which she is, she looks so sweet, which she is. But she is one of the orneriest human beings on this earth and she will play a practical joke in a heartbeat.”

It’s the funny moments, when her mother looks surprised at her gray hair in the mirror or when she steals her daughter’s coffee cup and hides it that make the hard times livable.

“The humor does lighten the physical chores that you have to do,” she said, adding even though her mom wants to help do the dishes, she no longer wants to use soap or hot water.

Nahas often shares her mother’s funny moments on Facebook, like this recent post: “Momma’s nose runs a bit at bedtime and tonight wasn’t any exception. After wiping her nose she said, ‘Remember last time when I wiped my nose and those dollars fell out?’ Ummmm, no, but I sure wish I did! She giggled at me, put her head on her pillow and asked for her baby. I pointed to the two stuffed critters at the foot of her bed and she said, ‘No, the one who barks and wags his tail!’ I told her he was at the vet’s for a checkup. Eyes close and sleep overtakes her. Sweet dreams Momma.”

In the sweet moments between mother and daughter lie the true challenges. Every day, she wakes her up for breakfast, helps her to the bathroom and takes care of personal hygiene. Her mother still will not go to the living room unless she’s “fully dressed and her hair is just so.” She takes her medications, eats little meals like yogurt, naps and works on coloring books.

“There are a lot of people that cannot do this,” Nahas admits. “The grace I receive is to be able to do it, to not be angry, not be cruel. The gift of this huge amount of patience I have for a 2-year-old on steroids. You cannot leave her alone, she requires assistance with everything.”

Just six months after her mother was diagnosed with Alzheimer’s in 2008, her father died. That same year, Nahas had a stroke and her son had a heart attack. Her brother died in 1992.

“When my dad was dying he said, ‘I hate to leave you with this burden.’ I said to him, ‘It won’t be a burden it will be an act of love,’” Nahas said.

Today, she admits it is both.

“The hardest part is watching the woman I knew die a little bit each day. Her talent and gift in craft and crotchet and artwork are gone. To know that sometimes she doesn’t know who I am,” she said.

Nahas said she receives assistance from her daughter-in-law, a certified caregiver each week, and spends time as a spiritual director hosting retreats. It’s important for her to look at care for her mother, who is currently in hospice at her home, as a ministry.

“It placed me immediately at the foot of the cross when Jesus said, ‘John, behold your mother.’ That is ministry for me,” Nahas said. “I know that the Lord loves what we’re doing here. He appreciates it, someone caring for their mother.”

Dr. Joseph Chan, 53, worked as executive director of Mercy Hospice and Palliative Care in Fort Smith for about four years. As an internal medicine doctor, caregiving was woven into his career, which translated naturally toward the priesthood. While studying in the seminary, he had to learn how to be cared for after being involved in a severe roll-over car wreck near Rolla, Mo., March 10, 2013.

He suffered a traumatic brain injury, was in a coma for two weeks and had 18 surgeries. Today, he still does physical therapy on his own.

“I woke up from (my) coma, traumatic brain injury (and) I had post-traumatic stress disorder. So I lost myself. You don’t know yourself. So it was difficult for me to recognize or to allow people to take care of me,” said Father Chan, who was ordained a priest in 2016. “… Later on when I was aware and conscious, it was more reflective that sometimes in life you need to ask for help.”

He said those being cared for can look to saints that have suffered, including St. Ignatius of Loyola, St. Therese of Lisieux and St. John Paul II.

“St. Peter Claver is my saint in healing because his relic was brought to me at the hospital, prayed over for intercession,” he said, adding after he was healed and became a priest, “I celebrated a Thanksgiving Mass at the shrine of St. Joseph (in St. Louis, Mo.) where the relic of St. Peter Claver is housed.”

Father Chan admitted that “caregiving is burdensome” but to look upon it as charity instead of obligation.

“It only becomes a dual ministry when you center on Jesus Christ. The one receiving the care has to exhibit a certain degree of humility. Be vulnerable to really open his soul to the caregiver,” he said. “The caregiver in turn has to know that he is giving care to someone in the person of Jesus, but also be cognizant in caregiving that one can only do that through charity.”

The sacraments are for all, including people with disabilities

People on the autism spectrum have range of gifts to offer

Catholics who cannot hear ‘are thirsting for encounter’

Catholics with disabilities vital to the life of the Church

Caregiving is stressful, but you can do something about it