He planned to become a professor, but God had other plans 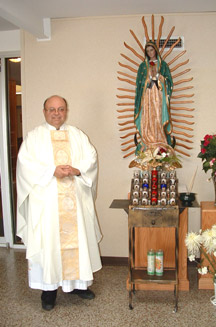 Patricia May
Father Clayton Gould, pastor of St. Mary Church in Siloam Springs, will quietly mark his 25th anniversary as a priest June 27.

Patricia May
Father Clayton Gould, pastor of St. Mary Church in Siloam Springs, will quietly mark his 25th anniversary as a priest June 27.

SILOAM SPRINGS -- When Father Clayton Gould was assigned to St. Mary Parish in Siloam Springs two years ago, he had a sense of déjà vu.

He'd been to Siloam Springs before -- he'd even been to the church long before he entered the seminary.

As Father Gould relates the story, it was some 35 years ago now, when his family made the trek from southern Arkansas -- he was born in Lake Village and grew up in McGehee -- to deliver his younger sister to Camp Paddle Trails in western Oklahoma.

Along the way, the Gould family attended Mass at St. Mary's. Northwest Arkansas -- and Siloam Springs -- was much less busy in those days and it was definitely a rural locale. There was even a small girl, clad in a dress and no shoes.

"I remember thinking, 'This really is the hills of Arkansas,'" he laughed. "I wondered what it would be like to be the priest here."

At the time, Father Gould was just getting ready to attend college although, he noted, the thought of becoming a priest had crossed his mind. But that was several years away.

He earned a bachelor's degree from Hendrix College in Conway and a master's degree in English literature from Memphis State University (now called the University of Memphis) with the idea of becoming a professor. He taught at St. Joseph High School in Conway and became so involved in parish work that, in his words, "I decided to take the plunge."

Father Gould was ordained on June 27, 1981, at the Cathedral of St. Andrew in Little Rock by Bishop Andrew J. McDonald. While his 25th anniversary is an occasion to be marked, he prefers a low-key celebration.

His first assignments as associate pastor took him to St. John Church in Hot Springs and Christ the King Church in Little Rock. As a pastor, he as served in El Dorado, Magnolia, Batesville, Newport, Mountain View, Engelberg, Mena, Mount Ida and Waldron.

Before his assignment in Siloam Springs, he served at St. Michael Church in West Memphis and its missions in Crawfordsville and Horseshoe Lake.

Among the highlights of Father Gould's life as a priest is the opportunity he was given by Bishop McDonald to do graduate work in Rome in 1990. He earned a degree in ascetical and mystical theology from the Pontifical University of St. Thomas Aquinas, commonly known as the Angelicum, and is thus qualified to teach at a major seminary.

The shortage of priests means that most of the diocesan priests are serving parishes, however, so Father Gould believes it's unlikely he'll find himself teaching in a seminary.

Siloam Springs has given Father Gould his first opportunity to work in Hispanic ministry. Located on the Arkansas-Oklahoma state line, the community has, like much of northwest Arkansas, experienced much growth in recent years and much of that growth has been from an influx of immigrants.

Father Gould hasn't found a language barrier, however. As he noted, anyone with a background in Latin can easily understand Spanish.