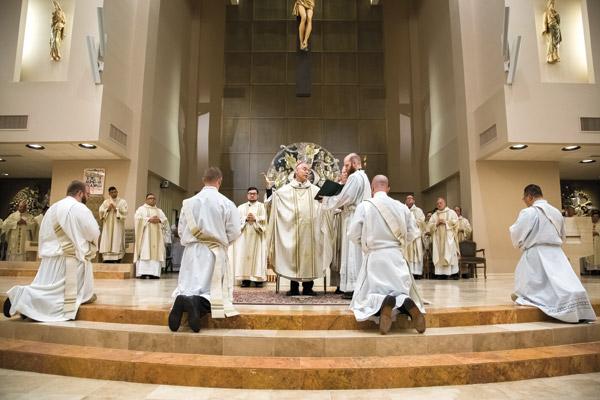 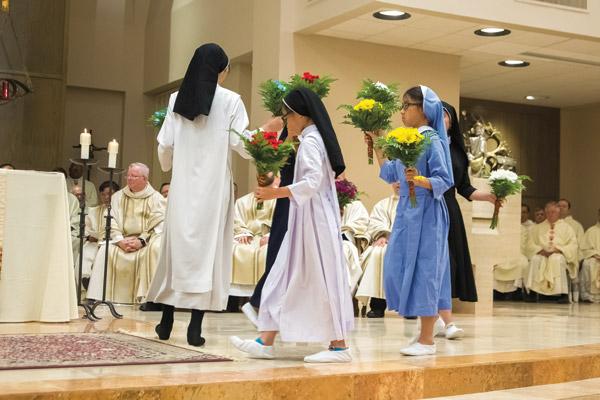 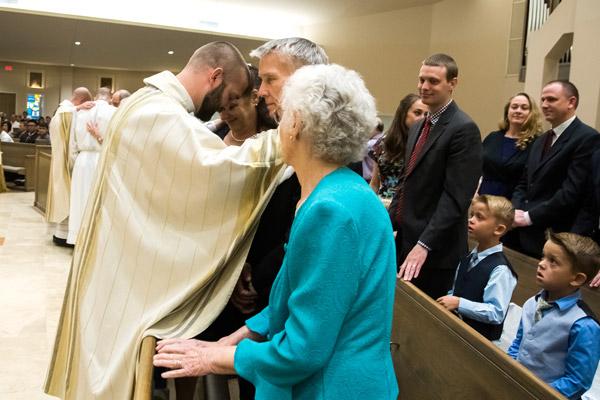 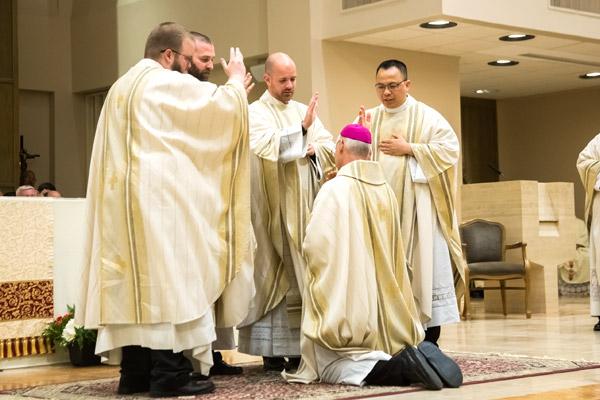 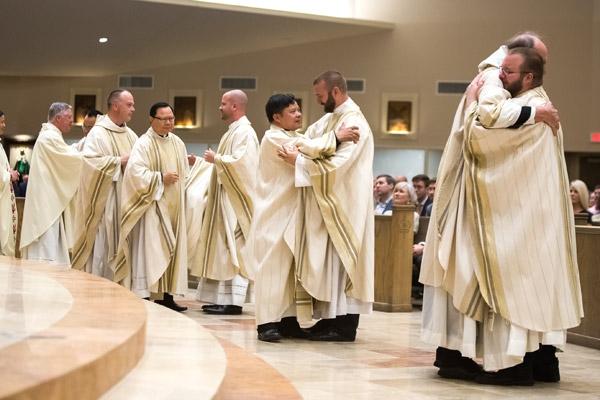 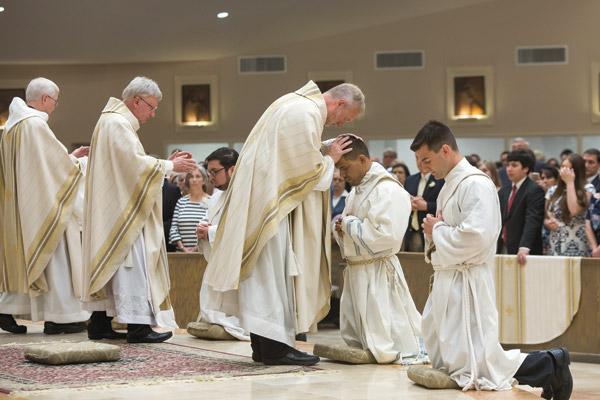 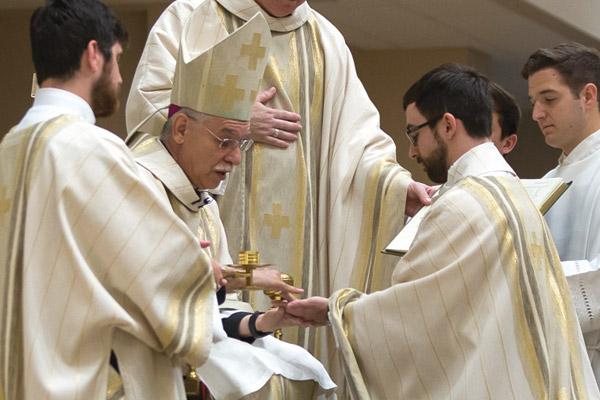 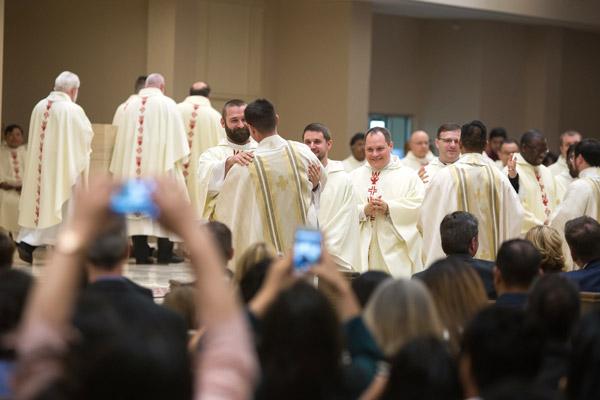 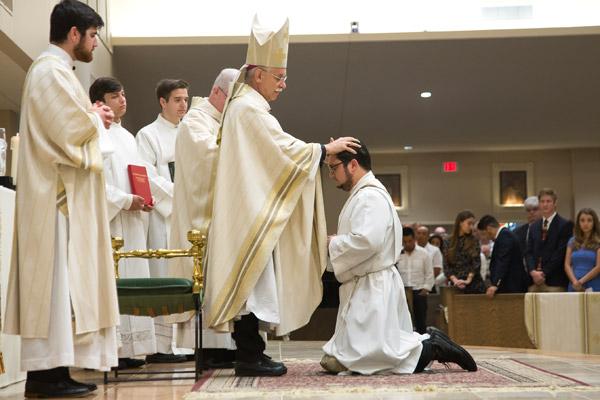 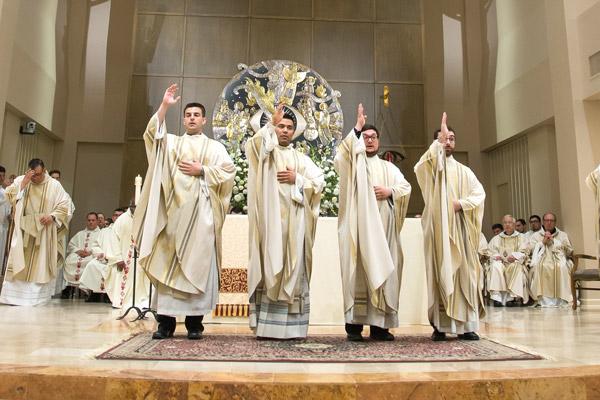 ‘You are to love everyone as Jesus loved you, 24 hours a day,’ bishop tells new priests 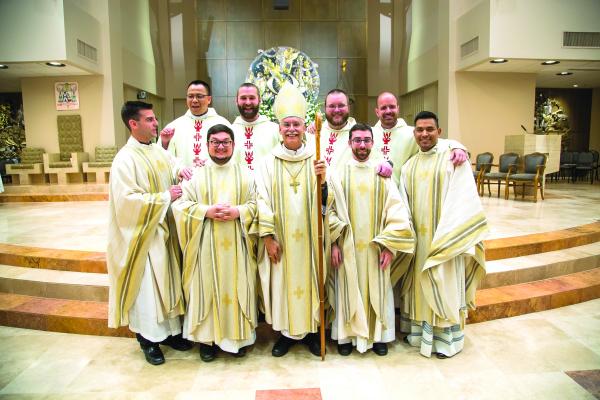 Bishop Anthony B. Taylor celebrates his 10th year as bishop of Little Rock and in that span, has ordained 34 priests.

In his June 2 homily during the second ordination in two weeks at Christ the King, he shared that the median age of Arkansas’ diocesan priests is down to 49 rather than 65. The newest eight ordained range in age from 26 to 41.

There are currently 87 diocesan priests, with 70 active, in the Diocese of Little Rock. Including visiting priests from dioceses in other countries and religious order priests, there are 140 priests serving the state.

The questions of discernment were answered, but the need for God’s guidance only strengthened. The sleepless nights of studying in seminary were over, only to be replaced by nights tending to the sick and dying. And while they laid down their old life, they were reborn into a new one, with a statewide, worldwide spiritual family.

Bishop Anthony B. Taylor pointed out in his homily at both priestly ordinations, May 26 and June 2, at Christ the King Church in Little Rock, how these men will unite with Christ celebrating the Eucharist, by also sacrificing their body and blood in the priesthood.

Fathers Tuyen Do, Patrick Friend, Jeff Hebert and Keith Higginbotham were ordained to the priesthood May 26. One week later, on June 2, Fathers Joseph de Orbegozo, Stephen Elser, Michael Johns and Daniel Ramos were ordained. The ordination Masses were held over two weekends to accommodate as many family and parishioners as possible who wanted to attend.

“They’re all very gifted and talented. I think in watching them in the time of formation, they’ve been inspiring to me in the way they’re really captivated by Christ. I think that they will be a real blessing to the people of the diocese,” said diocesan vocations director Msgr. Scott Friend May 26.

It is the largest ordination class for the diocese in more than 60 years (See sidebar).

On May 26, Bishop Taylor pointed out that many traveled from all over — from Canada, Vietnam, Zambia and Texas. While Texas isn’t quite the trek, Father Jeff Hebert’s Houston family was a big presence, with more than 50 people, including his parents, 10 siblings and 31 nieces and nephews. His parents, Richard and Melane Hebert, said it was the “best day of our whole lives.”

“When the bishop laid his hands on Jeff’s head I really felt that moment, because I know what Jeff was thinking, how it was finally here,” his mother said. “… I know he’s been waiting for that moment, he’s dreamed about it and prayed about it.”

Throughout the ordination, Father Hebert was overcome with emotion, “so much joy overflowing, it had to make its way out through the tears.” But, it was distributing Communion that was particularly powerful.

“It was almost like a movie of my life with my family and friends and people I’ve known since I was young to the friends I have now, each one was coming up and I was able to give them the Lord,” he said.

Both ordinations were bilingual, infusing Vietnamese and then Spanish. Father Tuyen Do had more than 150 visitors, from Vietnam to Fort Smith, attend his ordination. After leaving Vietnam to follow God’s call to the priesthood, he traveled to Canada, but left after years in the seminary.

His uncle, Father Paul Tran, a Dominican for 32 years who serves the Archdiocese of Vancouver, said he was happy to see his nephew find the place God wanted him to serve.

“I’m really happy that he achieved his goal to become a priest for God. I have been with him for a long time so I know he will be a good one,” he said. “… We already experienced a hard life in Vietnam so I think that will help us to work hard over here to serve the people.”

At the end of Mass, the Vietnamese Eucharistic Youth dancers from Sacred Heart of Mary Church in Barling performed a traditional dance with flowers, honoring the Blessed Mother.

As one of four Catholic High School graduates in this ordination class, Father Higginbotham is used to the bonds of brotherhood, but his mother Sherry said watching this unfold for him as a priest was special because “all of the men are so close,” she said.

“When all of the priests were coming through and laying hands, I mean, that was heaven,” Father Higginbotham said.

“I just think about Patrick, holding him as a little baby after he was born and just all the time going through his life, I feel very graced by God to be a part of his life and that he’s a priest,” Msgr. Friend said. Father Patrick Friend’s mother, Betty Friend, died in 2013 from cancer. “I really felt her presence with us today,” Msgr. Friend added.

Joseph Friend, a seminarian, joked that his brother’s ordination “definitely puts the heat on,” understanding the ways he needs to grow before his ordination in two years.

“What’s been so cool about our relationship is I’ve really been able to be on his journey in a special way. … If he takes care of the Diocese of Little Rock like he took care of me, I think we’re going to be in a pretty good spot,” he said.

On June 2, Father Daniel Ramos could not celebrate his ordination with his family who live in Mexico, but could watch via Internet live stream. Immaculate Heart of Mary parishioners in North Little Rock (Marche) were his spiritual family.

“I’m taking his mother’s place to offer him to our Blessed Mother,” Karen Murphy said she told him during the first blessing he gave to her, her husband Patrick and two daughters. “He’s like a son. He’ll be a very devoted, very sincere and very honest and wonderful priest.”

The fellow priests lined up on the altar got a work-out, hugging each new priest, a beautiful display of welcome and priestly brotherhood.

“(Father Robert Dienert, in a wheelchair) approached me and to see the love and support of my brothers in the priesthood, that was the moment that I really see I have a family in them,” Father Ramos said, adding that Father Dienert said, “‘I’m here with you, I’m praying for you.’ It was a witness of faithfulness.”

Like Msgr. Friend, Father Bill Elser, pastor of Sacred Heart of Jesus Church in Hot Springs Village, welcomed his nephew to the priesthood.

“I just told him to persevere, pray. I think he’s going to be a servant of the Lord who will be there for whoever he’s called to serve and I pray and I really believe he’ll grow in love for the Lord as the years go on,” Father Bill Elser said.

“I think every Catholic boy thinks about being a priest as I did, but God had a plan and the plan was not for me to be a priest,” Dr. Elser said. “Stephen will be a much better priest than I would be; we are so proud of him.”

As the Johns family filled several pews and snapped photos while Father Mike Johns was ordained, his younger brother Mark Johns, also a seminarian, was serving on the altar.

“It’s really surreal, just to see him give himself in such a beautiful way, so completely. It’s something that really gives me something to look forward to,” Mark said.

His ordination is scheduled for 2023.

“He’s always going to be an example I can see and really strive to be and just his overall support is something I’m very grateful for and very blessed to have,” he said.

Parents Michael and Julie Johns were both proud, but had few words to accurately describe the blessing of their son taking this next step.

“Pretty much everything,” his father said about what touched their hearts during the ordination.

At the end of each ordination, it is tradition for the newly ordained to embrace in a group hug. It was a moment for Father Stephen and Father Joseph de Orbegozo to celebrate yet another milestone in a friendship that began in kindergarten.

“There’s a new layer added to our bond and that’s the priesthood. I think of him as a brother … Now he’s a brother in a new way, as a priest. And we’re brought into this wider brotherhood,” Father de Orbegozo said, and as brother priests, “we’re all becoming closer to Christ together. And that’s something that doesn’t take away our individuality but makes us more who we are.”

While a seminarian, Father de Orbegozo briefly served at St. Peter the Fisherman Church in Mountain Home, and pastor Father Norbert Rappold said it was “very humbling” to be asked to vest him.

“What I told him was, ‘Just remember his yoke is easy, his burden light’ as I hugged him; just to welcome him into the vineyard as a coworker,” he said.

In addition to graduating from Catholic High, Fathers Elser, Friend and de Orbegozo grew up attending church and school at Christ the King. Msgr. Malone, pastor and a master of ceremony for the ordinations, said it was “a great gift and one of the blessings to be a pastor to be able to witness a day like today.”

He pointed out an important truth for every Catholic to consider — it is not one person that forms a priest.

“Everyone in the parish had something to do with today, from those who raise their children in the faith, those who are part of our perpetual adoration, our vocations team, the school.”

Bishop Anthony B. Taylor celebrates his 10th year as bishop of Little Rock and in that span, has ordained 34 priests.

In his June 2 homily during the second ordination in two weeks at Christ the King, he shared that the median age of Arkansas’ diocesan priests is down to 49 rather than 65. The newest eight ordained range in age from 26 to 41.

There are currently 87 diocesan priests, with 70 active, in the Diocese of Little Rock. Including visiting priests from dioceses in other countries and religious order priests, there are 140 priests serving the state.