Before coming to U.S., priest helped people with disabilities, poor in India 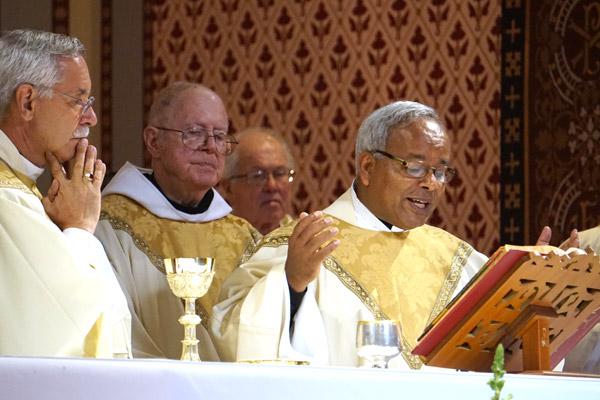 Born in Kerala, India, Father Aby Abraham, IMS, grew up watching his parents devote their time to the Church.

“I received my faith from my parents. They were always faithful to the spiritual activities of the church,” Father Abraham said in a biography provided to Arkansas Catholic. “Our everyday family prayer built up our faith and spirituality. I had two aunties who were nuns. They helped me as well.”

He said it was his mother who helped “me realize my vocation” as well as his aunts and the “exemplary life” of his local parish priest. Through God’s intercession in these key people in his life, he found his calling to the priesthood.

“I wanted to become a priest and nothing else,” he told Arkansas Catholic ahead of the June 26 Jubilarian Mass at the Cathedral of St. Andrew in Little Rock. “ … We used to go to church almost every day and then we had our evening prayers as a family.”

Father Abraham, who has five siblings, entered the seminary at just 15 years old. He had 13 years of formation, ordained by the Indian Missionary Society. The society, founded in 1941, consists of Indian priests who proclaim God’s word through “pastoral care, education and ministry to the poor, to children and orphans, to prisoners and all those marginalized by society,” according to ims.org.in. They serve in 27 dioceses in India and three in the United States.

His first appointment was as associate pastor, then pastor at Christ the King Church in Koderma, in the state of Bihar, now Jharkhand.

“There I was in charge of an elementary school and social work. We had extensive social work. Later we started a hostel for the poor children,” he wrote. “We built a grotto of Our Lady with the help of the parishioners.”

In other parishes, he continued his work with students as well as people with disabilities.

“We could do little, little things and they become happy. That’s what I enjoyed the most,” he said of ministering to people with disabilities.

Often in remote areas, “you don’t know who to meet, where to go because their parents are also illiterate so they don’t know what” doctor to see to treat their condition. “When we took them to the right doctor who could treat them, some of them were almost well.”

“We learned English in the seminary and did all our studies in English,” he wrote. “The hardest thing to adjust may be the accent. Most of the things looked unfamiliar in the beginning. We have to relearn most of the things.”

Father Abraham said the parishioners at Center Ridge are “very cooperative and understanding.” The spiritual life of his parishioners is a top concern, saying confession and family prayer are vital.

“I believe in family prayer. A lot of importance must be given to that because that changes the family. The family that prays together in fact stays together,” he said.

Reflecting on 25 years and more than 8,500 miles from where his vocation began, Father Abraham is grateful.

“I am most grateful to God for his kindness, compassion and guidance. It is impossible to live this life without his assistance and leadership,” he wrote.