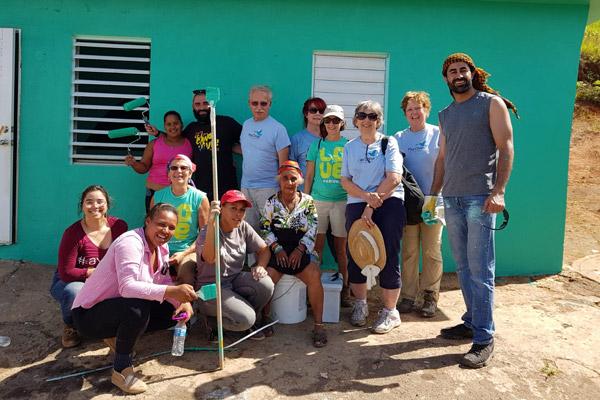 People who wish to donate to efforts in Puerto Rico can mail a check for Pax Christi Little Rock to the office of president Sherry Simon, 415 N. McKinley Street, Little Rock, AR 72205. Write in the subject line “Puerto Rico.” All money donated goes strictly to Puerto Rico relief, with members paying their own way on the mission trips.

In the town of Humacao, Puerto Rico a woman named Maria Teresa de Leon Vasquez, 69, prayed in her bathroom, clutching her little dog as Hurricane Maria made landfall Sept. 16, 2017.

“She thought it was the end of her life,” Dr. Sherry Simon, president of Pax Christi Little Rock said, who spoke to her on a recent mission trip. “She was terrified and she prayed hard.”

Though the hurricane wreaked havoc on her home, leaving a mangled mess of vegetation in the front yard filled with debris, snakes and rats, all of it was material — the loss of her sight is irreplaceable.

While she received food and water from the Red Cross, there was no electricity until this June, nine months later. Pharmacies could finally fill prescriptions. She went without insulin for her diabetes until January when an unidentified woman gave her the medicines. She became legally blind without her medications, but survived.

“I’ll tell you what upset me the most … the fact that it took that long. This was not a huge area, it just upset me that our country did not do more and certainly that maybe Puerto Rico didn’t do more, didn’t have the wherewithal to do more. But what amazed me about this woman is she’s not bitter — I’d be furious, I’d be wanting to sue somebody probably,” Simon said. “… She had a smile on her face all the time. She was amazing.”

Teresa’s story was one of many that seven members of Pax Christi Little Rock, a Catholic social justice group, heard while on a 10-day mission trip to Puerto Rico, assisting with Hurricane Maria cleanup.

Sherry Simon and her husband George, members of Christ the King Church in Little Rock, spoke last fall with Pax Christi board members about a trip to the U.S. territory.

“We were devastated when we began to realize over the first month … it did not appear that they were treating this the same way as they did Hurricane Harvey in Houston. So we got a little bit obsessed about it, honestly,” she said.

George Simon said clearing out Teresa’s yard, which allowed her to “reclaim her home” and sealing the roof for another woman, was an opportunity to see “tangible results.”

“It makes me ponder also my faith more than anything else and what that faith is all about,” he said of the missionary experience. “It’s actually witnessing firsthand what Jesus was talking about and experiencing it. It makes his words far more meaningful when you actually do what he tells you to do and then you witness the fruits.”

This year, Sandee Haslauer retired as director of the Honduras Mission at Christ the King Church. She’s been to Honduras more than 30 times, with 14 years as director. It was her first trip to Puerto Rico.

“Instead of directing people I was actually working with the people and it was a closer relationship I think. Spiritually, you just see God everywhere, it’s just so beautiful,” she said.

“I cleaned them out, repotted plants, painted the walls of the garden white, painted all these little garden decorations, there was a little man in a sombrero sleeping. There was so much undergrowth; it was like an archeological dig.”

In partnership with Casa Solidaria, Sherry Simon said the group plans to go back in November and help beautify Miraflores, which in Spanish means “looking at flowers.”

The town wants to “become the flower capital of Puerto Rico and eventually the world, to beautify their city with it and also use it to sell to the rest of the island,” she said.

According to an Aug. 9 New York Times article, the Puerto Rican government acknowledged that more than 1,400 people died following Hurricane Maria, more than 20 times what was reported as the official death toll. Sherry Simon emphasized that while the tourist locations regained electricity sooner, many died from the ripple effects of no electricity, making a death count difficult.

“What’s so upsetting about it is everywhere you see the United States flag. You see the flag and you see how we’ve left it. I’m sure it isn’t all the government’s fault; I think it’s been a very difficult thing to address. But I’m not sure they tried really hard. I’m really not sure they did,” Simon said, adding “They are our brothers and sisters and they deserve simply our respect and our assistance in difficult times.”

People who wish to donate to efforts in Puerto Rico can mail a check for Pax Christi Little Rock to the office of president Sherry Simon, 415 N. McKinley Street, Little Rock, AR 72205. Write in the subject line “Puerto Rico.” All money donated goes strictly to Puerto Rico relief, with members paying their own way on the mission trips.