A Catholic you want to know: Bob Honzik 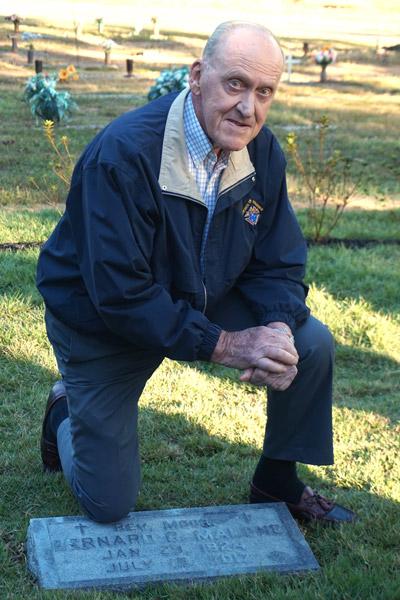 Aprille Hanson
Bob Honzik of Hot Springs Village kneels beside the grave of his good friend Msgr. Bernard Malone in the priests’ circle at Calvary Cemetery in Little Rock.

Aprille Hanson
Bob Honzik of Hot Springs Village kneels beside the grave of his good friend Msgr. Bernard Malone in the priests’ circle at Calvary Cemetery in Little Rock.

Why you want to know Robert Francis “Bob” Honzik: Bob Honzik has done more in his 20 years in Arkansas for the diocese and his parish than many do in a lifetime. He is dedicated to raising money and volunteering as a trustee with Knights of Columbus Council 10208, where he served in the past as a grand knight. He is currently the director of vocations for the state council. Some of his charitable efforts with the knights the past 19 years include promoting and donating to the House of Formation in Little Rock; updating the statues at St. John Center; collecting and donating furniture to Fletcher Hall at St. John Center; starting the Taste of Faith seminarian fundraising dinner in Hot Springs Village; opening their home to countless seminarians and priests over the years; and most recently, spearheading the effort to beautify Priests’ Circle at Calvary Cemetery in Little Rock.

At his parish, Honzik, a U.S. Navy veteran, also serves as an usher and prays during a weekly adoration hour with his wife.

Career: Former marketing manager for John Deere; he lived in several states while traveling nationally and overseas for his job before retiring in Arkansas 20 years ago.

What feeds you spiritually?
It was a person. Because of all my travels in my career I never got involved in a parish. I didn’t become a Knight before I moved here. Who really did it to me was Msgr. Bernard Malone (the late pastor at Hot Springs Village). From there he asked me to do fundraising because we had a building program going on ... which I did and Mary Anne was very, very principal in all of that. We were able to pay that off in five years.

You have done so many projects for the diocese and to support vocations. Why is that important to you?
The diocese is the heart of our Catholic faith in the state of Arkansas. If they succeed and they’re healthy, then all the outlying parishes will benefit.

What project has touched your heart the most? The Priests’ Circle is pretty recent … but one with a lot of lasting depth I would have to say is the House of Formation and the efforts our parish has done with the House of Formation. And the seminarians, we have our open house every year and all of them come here that are in town.

How does it strengthen your faith to be both a donor and volunteer for the Church?
I rub shoulders with so many people that have a stronger faith than I have. The seminarians have been in and out of our house the past 17, 18 years. Some of them became priests and some didn’t. But I can’t think of a single one that I didn’t learn something from (that was) faith based. (Father) Nelson Rubio has just been so much fun to be here in our home and to watch him through his health issues and all. So he’s an inspiration.

You were close friends with Msgr. Bernard Malone, who died July 19, 2017. What was your relationship like?
Even after he retired to St. John Center he spent many, many weekends with us. One of his cute things was when he’d pastor here, is he likes merlot wine and I like wine and so the phone would ring and he’d say, “What are you doing?” And I’d say “Oh nothing.” “Got any wine?” “Yeah, come on over.” He’d say, “I’m in your driveway.” That’s the relationship we had … Mary Anne told Msgr. Francis (Malone, his nephew) that no one has slept in Msgr. Bernard’s room since he died … That’s the closeness we had with him.