In the pool or out, MSM sophomore commands attention 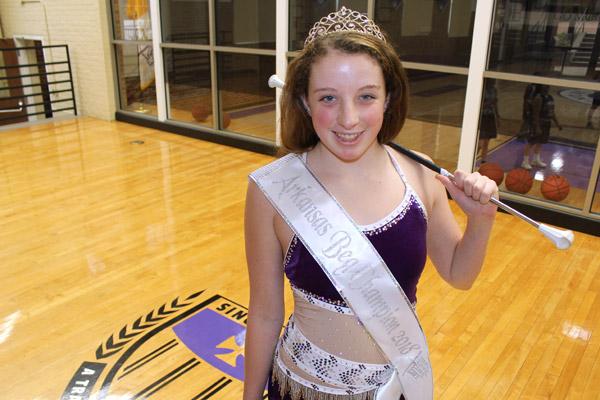 Dwain Hebda
Kate Goldtrap shows her competitive twirling garb in the Mount St. Mary gym. The sophomore balances her time between the swim team, in which she qualified for state last year, and twirling, for which she is nationally ranked.

Dwain Hebda
Kate Goldtrap shows her competitive twirling garb in the Mount St. Mary gym. The sophomore balances her time between the swim team, in which she qualified for state last year, and twirling, for which she is nationally ranked.

Kate Goldtrap shifts in her chair and doubtfully eyes the Arkansas Catholic reporter. The soft-spoken sophomore has been customarily polite throughout the interview but incredulity creeps into her face when she’s asked how one successfully twirls blazing batons.

Goldtrap, who did the stunt last year during a football halftime performance at Trinity Junior High in Fort Smith, doesn’t miss a beat.

“Don’t grab the end of the baton,” she said, a smile tugging at the corners of her mouth.

Goldtrap is living proof that fire and water do mix, at least within the confines of the 15-year-old’s twin passions of swimming and baton twirling, and she’s equally accomplished at both. As a swimmer, she powered her way to state last year despite dragging an injured knee in her wake. As a nationally ranked twirler, she’s been known to juggle three batons at once, incorporate tumbling while twirling and yes, harness fire for a show-stopping finale.

“It’s really fun because I love to get out there and have the field to myself and make everybody scream.” Kate Goldtrap

“I’m part of the halftime at Catholic High football games,” she says. “It’s really fun because I love to get out there and have the field to myself and make everybody scream.”

“At one of (Trinity’s) football games I did twirl fire. That was really nerve-wracking. I twirled two on fire and everybody went crazy. It was really scary.”

Goldtrap devotes a lion’s share of her time to her activities. Swimming in the largest high school classification in the state and for her club team, Arkansas Dolphins, requires training most days a week nearly year around, both in and out of the water.

Twirling is no less demanding both in time and in toughness, as her many bruises sustained from errant batons attest.

“I train Wednesdays, Fridays and Saturdays,” she said. “I’m with two coaches; I have one in Conway and I have one in Fayetteville who used to be the featured twirler for the Razorbacks.”

The grueling schedule hardly bothers Goldtrap, however, so long has she kept these books in balance running from one practice or competition to the next.

“I’ve been swimming competitively since I was 5,” she said. “My dad was a swimmer and I learned how to swim when I was 18 months old. It was just kind of like everybody did it and I loved being in the water. I always wanted to be a mermaid when I was little.”

“I picked up twirling in sixth grade and I’ve been twirling ever since. You need to be flexible in your wrist and in your fingers. For finger twirls, it is going through the fingers, but for everything else it’s all with your wrist. And your head comes involved sometimes when you’re rolling it on the back of your neck.”

Born in Fort Smith where she grew up in Christ the King Parish, she landed on the Mount St. Mary swim team after the family moved to Little Rock last Christmas. Swimming helped ease the transition to a new school full of mostly new faces.

Now a member of Our Lady of the Holy Souls Church in Little Rock, Goldtrap qualified for state in three events last season, but per meet rules was only allowed to swim in two. She chose the 100 breaststroke and the 200 IM over the 500 freestyle, placing sixth and eighth, respectively, despite a knee injury suffered while twirling.

“I fell on it and it got all messed up,” she said. “I’d just qualified for the sectional team swimming for the Dolphins, which was a really big deal. I couldn’t swim for four months. When I came back in March I swam, but I couldn’t really do any kicking.”

“I didn’t know if I was going to be able to swim at state. I got an MRI the day before and they said I could swim so I did. I ended up reinjuring myself doing that. But I really wanted to swim, and I ended up swimming well.”

In seventh grade, Goldtrap qualified for twirling nationals and became Miss Majorette of Arkansas for her division. Last summer, she again qualified for nationals where she placed 26th out of about 500 competitors. Her future goals are to advance to the highest level in both sports.

“I would love to swim in college, and I am also working this year to make the NCSA (National Club Swimming Association) cut; it’s like a national qualifying cut,” she said. “In twirling, I want to win nationals. I’ve gotten close considering how many girls there are. It’s really tough.”