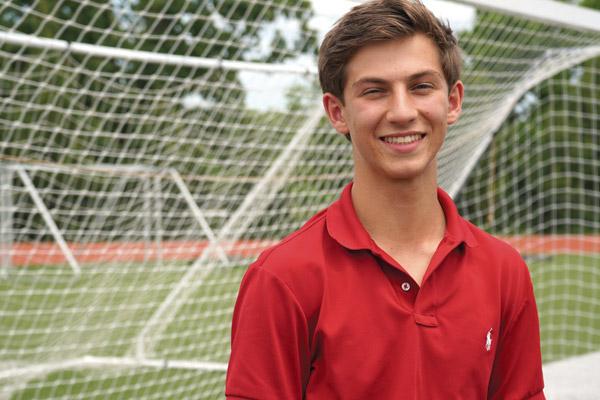 Malea Hargett
Ethan Lehman has played soccer all his life and is hopeful he will be able to join a team while in Thailand for the next year.

Malea Hargett
Ethan Lehman has played soccer all his life and is hopeful he will be able to join a team while in Thailand for the next year.

Ethan Lehman is stepping out of his comfort zone in order to meet new people, try new foods and experience a new culture.

Instead of heading off to college like most of his classmates, this Catholic High senior is moving across the globe to be back in high school again. In August he leaves for Thailand for 12 months as part of the Rotary Youth Exchange. Like a typical exchange student, he will live with host families, attend high school and participate in extracurricular activities and outings with his hosts.

Instead of opting for places like Europe or India where English is more common, Lehman decided that Thailand would push him out of his comfort zone.

“Initially I wanted to go to India, but they speak English in their schools, and I wanted to make it a big part (of my experience) to try another language. I thought that would be a benefit of doing something like this.”

“My goal when I get over there is to try not to say ‘no’ as much as I can. If I have an opportunity I don’t want to pass it up because it is a little bit out of my comfort zone.” Ethan Lehman

Thanks to a Rotary scholarship, Lehman’s only expenses will be a plane ticket and insurance.

For the past year, Lehman has been preparing himself for the cultural exchange. During his senior year he has tried to meet new people and join different clubs in order to get more accustomed to trying new things. He also has studied the geography and culture of Thailand.

“I’ve really used this year in anticipation of Thailand to branch out as much as I can,” he said.

He is hopeful his love of soccer will open doors for him to make friends in his new high school. Lehman is a four-year soccer player for CHS, joining them in the state 6A playoffs in Conway earlier this month.

“I have played soccer since I was a little kid. Being able to play soccer over there in high school would be really fantastic,” he said.

His biggest goal is to be open to whatever opportunities are presented to him.

“My goal when I get over there is to try not to say ‘no’ as much as I can,” he said. “If I have an opportunity I don’t want to pass it up because it is a little bit out of my comfort zone, especially going to an Asian country. You may not be able to communicate with most of the people you meet when you first get there. It might be difficult to open up to that, but I am definitely ready for the challenge. I want to put myself in that situation.”

This summer the 17-year-old plans to save money by refereeing soccer games and working a local fast food restaurant, practicing Thai phrases and spending time with his parents and 15-year-old sister. When he returns in August 2020, he wants to attend college in the U.S. to begin his studies, possibly looking at a career in medicine like his mother.