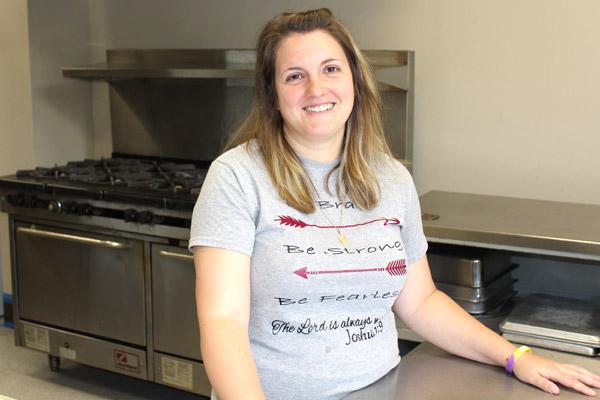 Principal Kristy Dunn has a million things left to do before the start-of-the-year bell sounds.

“We are not like a lot of parochial schools,” Dunn said. “Who we’re serving here is very different and we’re purposeful in asking the question, ‘What does our community need?’ I’m very proud of that, because I think it takes courage to be different. I think our families are demonstrating courage every day in some of the different ways they have to live.”

Parochial schools and parishes in the Diocese of Little Rock have seen a demographic shift over the past 25 years, thanks to the influx of Latino families. St. Theresa School ranks near the top of that measurement, with a student body that’s 80 percent Hispanic.

It’s also predominantly low-income, with almost three out of four kids qualifying for free or reduced cost lunches. Based on last year’s enrollment, that works out to approximately 144 of the school’s 197 kids who are “food insecure,” or lacking access to food.

“We’re purposeful in asking the question, ‘What does our community need?’ I’m very proud of that, because I think it takes courage to be different.” Kristi Dunn, principal of St. Theresa School in Little Rock

“Last year, we observed kids with stomachaches, headaches, sluggishness, an inability to focus,” Dunn said. “They would come up to the office and we’d say, ‘Did you eat anything this morning?’  Well, no.”

The school did what it could last year, rolling out Breakfast After the Bell to give those who could bring a bagged breakfast some time to eat it. But by second semester, Dunn was thinking bigger — much bigger — to provide hot breakfast to every student by the fall 2019 term. It seemed an uphill push until Dunn discussed her idea with Sister Iliana Aponte, DC, the school’s counselor.

“Sister came in November and not long after she said, ‘You know (Daughters of Charity) have grants. You need to apply,’” Dunn said. “The grant is from MMI (Mission and Ministry Inc.), which is the Daughters of Charity grant arm, and we were able to get it because we have a Daughter of Charity here now. So, thanks be to God.”

The $50,000 grant is a double blessing because it will not only fund hot breakfast for students — every single one of them — but it is also enabling the school to subsidize its after-school program, Extended Day Support.

“Our after-care program used to cost $8 a day, which is cost prohibitive for most of our families,” Dunn said. “We now can charge $1 a day, you can stay until 5:30 p.m., you can get something to eat, you can get academic support, you won’t be a latchkey kid, you won’t be going home by yourself. It’s huge.”

The new programs come online in time to serve the largest student body to attend St. Theresa’s in some time. The lower grades had been steadily increasing headcount in recent years, and the school will also add about 30 kids from St. Edward School, which closed in May.

“I’m ballparking serving 70 kids a day after school, which is about a third of the population,” Dunn said. “The payoff is who we already are, it just goes a little deeper. We pride ourselves on being an extended family to our families. We’re in partnership, we’re a support. I would never say my job is just to figure out what this particular kid needs in his science class. I’ve gone to people’s apartments. We’ve journeyed with them on immigration.”

Dunn pauses, takes a deep breath. The fight for this school to be great, to be innovative, to stay open, is personal. And it is a fight, breakfast or no breakfast; Dunn and her team harbor no illusions otherwise.

But support from their parish community — one St. Theresa alum, upon hearing of the hunger statistics, organized a weekend food pantry set to open in the fall — reminds them of the importance of their vocations. They deploy with a missionary’s attitude that expects great and wonderful things.

“It’s like we’re setting them up to succeed; like we really are helping to feed and helping to care. The hours just don’t feel as short.”

Reading buddies set students up for success in school, life