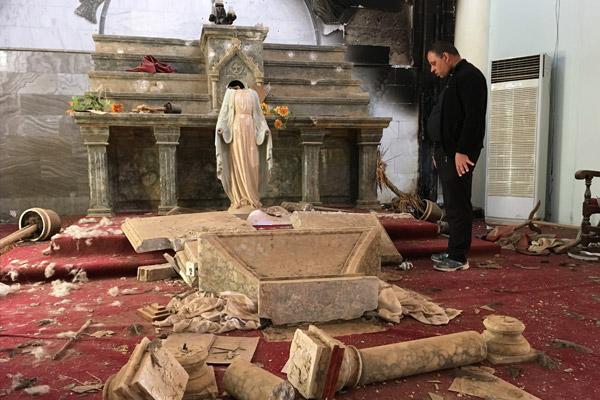 ‘Moral duty’ of Christians is to help migrants, refugees

VATICAN CITY -- Christians have a moral obligation to show God’s care for all those who are marginalized, especially migrants and refugees, Pope Francis said.

Pope Francis: Patient God rescued those in the ‘hell’ of addiction

VATICAN CITY -- Pope Francis slipped out of the Vatican Sept. 24 to spend the day with members of an Italian lay community, the young people in recovery they assist and tenor Andrea Bocelli.

Special Sunday each year to be dedicated to word of God

VATICAN CITY -- To help the Church grow in love and faithful witness to God, Pope Francis has declared the third Sunday in Ordinary Time to be dedicated to the word of God.

WASHINGTON -- The Catholic Church in the United States has spent a staggering amount of money -- close to $4 billion in the past 20 years -- to investigate, adjudicate and prevent clergy sex abuse, and to compensate victims for the harm they’ve suffered.

Militia harassment still makes it dangerous to be Christian in Iraq, Syria

WASHINGTON -- The genocide conducted by the Islamic State against Christian communities in Iraq and Syria has turned into continued harassment by Iran-backed militias and shows no signs of abating soon.

“Hospice” is borrowed from the Medieval Latin hospitium, which described a place of shelter and compassionate care during the Middle Ages. (Understanding our Church, Seeds of Faith)

What saint do you feel closest to and why?

“The saint that I feel closest to is St. Adjutor. He escaped persecution from swimming. I am a swimmer and it is inspiring that he swam in chains. I ask that ...” (Youthspeak, Seeds of Faith)

Was the Blessed Mother always a virgin?

Q. Would you please explain the apparent contradiction in the verse in Matthew’s Gospel (1:25) that says, “He (Joseph) had no relations with her until she bore a son, and he named him Jesus.” (Question Corner, Seeds of Faith)

Journeying into motherhood as a young Latina

My husband and I will be celebrating our one-year anniversary in just three months. It’ll be a grand celebration for us as, God willing, we’ll be celebrating it with a new tiny addition, our first child. (Columns)

Almost every day we hear about terrorist attacks, escalating violence and wars throughout the world. (Guest Commentary)