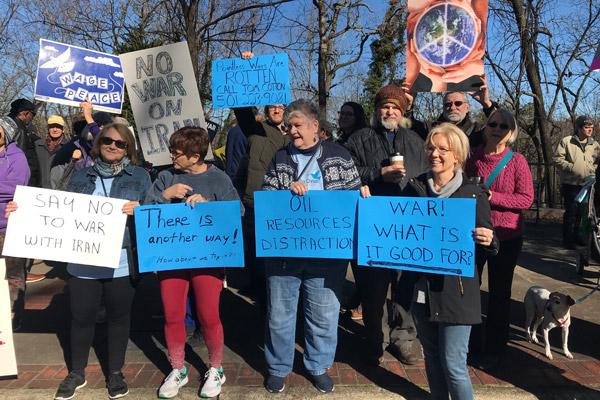 Members from Pax Christi Little Rock raised signs at an anti-war rally in Little Rock Jan. 4, with phrases like, “Wage Peace” “War! What is it good for?” “There is another way” and “No war on Iran” in protest of ongoing conflicts with Iran.

Tensions heightened with a siege of the U.S. Embassy in Iraq by protesters Dec. 31-Jan. 1, followed by a U.S. drone strike Jan. 3 that killed Iranian Maj. Gen. Qassem Soleimani and six others. The Iranian government retaliated for Soleimani’s killing with missile attacks on Iraqi bases Jan. 7.

“It has nothing to do with the Gospel of Christ and love your enemies and turn the other cheek,” said Dr. Sherry Simon, president of Pax Christi Little Rock regarding the conflict between the United States and Iran. “I think that Christ in his godliness had an understanding — there is no way for us to remain a viable species honestly if we continue to take this aggressive approach with our neighbors, with other people who live on the planet. We’re going to destroy ourselves because it will continue to escalate.”

The Little Rock chapter of Pax Christi USA, a Catholic peace and social justice group that promotes nonviolent conflict resolution and diplomacy, co-sponsored the rally at the Promenade on Kavanaugh along with Arkansas Coalition for Peace and Justice, World Beyond War, Arkansas WAND and Veterans for Peace. About 100 people attended.

At the Little Rock protest, Pulaski County Circuit Judge Wendell Griffen, an outspoken critic of the death penalty, explained to the crowd that murder is not justified just because the person was “a bad man.”

“Are you simply lying to yourself to rationalize the murder you’re committing so you will make your murder seem somehow sane? My friends this is the illogic we’ve been asked to buy,” he said.

“It got me thinking that we’re putting ourselves up as judge and jury of this person and carrying out the sentence. If you were on (U.S.) homeland, you couldn’t do that. So how is it right we can go into somebody else’s country and do it?” Blanco said.

Protesters also included veterans, with remarks by Michael Vaughn, a veteran who served in Afghanistan and leader of the Little Rock Chapter of Veterans for Peace.

“He said one line that really got to me,” Simon said, “‘I spent several years over in Afghanistan, they kept telling us we were going over there to fight for our freedom in this country. I never found that over there.’”

For centuries, Catholics have leaned on the “just-war theory,” that encompasses several principles, including that war is a last resort and there’s an intention of establishing peace. In a Jan. 6 Catholic News Service article, Maryann Cusimano Love, associate professor of international relations at The Catholic University of America, explained that morality of drone warfare is “called into question” under the pillars of the just war theory, emphasizing that drones take “away from civilians the only means of protection they have, which is running away.”

A 2016 Vatican conference co-hosted by the Pontifical Council for Justice and Peace and the international Pax Christi rejected that a “just war” exists.

The fear, Simon said, is that the country is becoming the aggressors “because we’re doing to them what we’re so upset that they’re doing to us.”

“We have to learn to build trust and to build trust you have to be consistent for a period of time. We have not done that,” Simon said. “… There’s not a good guy here. We’ve all made mistakes. We’ve all done things that have not been done with the goal of making peace but on both parts of gaining power and making money.”

During the Angelus prayer Jan. 5, Pope Francis led pilgrims in silent prayer for peace. According to a Jan. 6 Catholic News Service article, Pope Francis said regarding the tensions between the U.S. and Iran, “War only brings death and destruction. I call on all parties to keep alive the flame of dialogue and self-control and avoid the shadow of enmity.”

Soleimani’s death spurred Iran to fire about a dozen ballistic missiles at Al Asad and Erbil bases in Iraq in retaliation Jan. 7. No Americans or Iraqis were killed in the attack.

Trump held a press conference Jan. 8 regarding the missile attack, stating the U.S. will add more “punishing economic sanctions,” according to a CBSnews.com report. This is in addition to the president’s 2018 decision to not participate in a 2015 international agreement with Iran that for 15 years had strictly limited the country’s nuclear weapons. As part of the agreement, the U.S. and countries within the European Union ended trade restrictions, and pulling out of the deal caused a hit to Iran’s economy, Time stated.

For Catholics, Simon said war should not be looked at through a political party lens, but with morality in mind. And while many might say the teachings of Jesus to turn the other cheek are “not practical,” she agrees — it’s in fact “extremely radical,” she said, that Christ brought a message of peace to transform the world.

“I think we have to figure out within each of our hearts do we really believe in the Gospel or not? This is a direct message from Jesus to us on how to behave. What do you do when someone comes and attacks you? Did Jesus say ‘send some nukes over and kill them’? He does not,” Simon said.