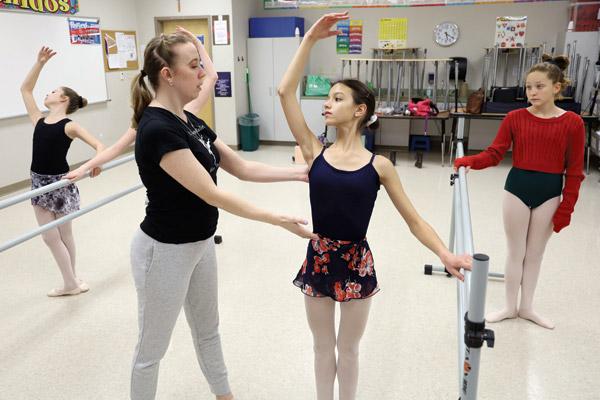 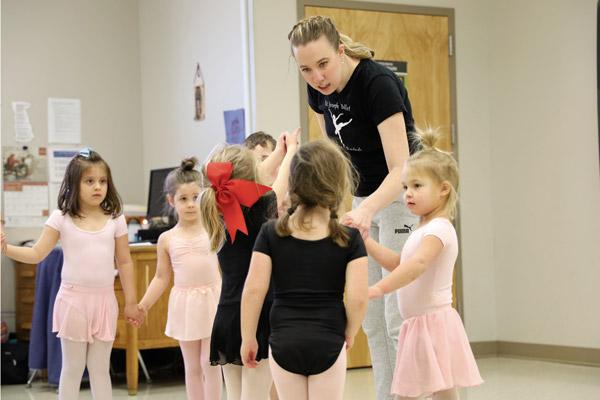 Dwain Hebda
Rachel Hicks rounds up her littlest sugar plums for ballet class. Hicks, a longtime ballet teacher in the area, has grown a ballet program housed at St. Joseph School in Fayetteville.

Dwain Hebda
Rachel Hicks rounds up her littlest sugar plums for ballet class. Hicks, a longtime ballet teacher in the area, has grown a ballet program housed at St. Joseph School in Fayetteville.

Read more about other school programs that get children moving:

Might as well jump: CTK youngsters show flashy footwork (May 15, 2018)

FAYETTEVILLE — It’s Tuesday afternoon at St. Joseph School in Fayetteville, and one of the most unique after-school activities throughout the Diocese of Little Rock is about to begin.

The door to the classroom cracks open and, one by one, toddlers in tights file through the door like little ducklings. Nine tiny girls in leotards the color of spring and one boy, a tornado in gym shorts, all get and give a hello hug with Rachel Hicks, the leader of this group, and Jackie Dumond, whose classroom they’ve come to.

“Get in a circle!” urges Hicks cheerfully. Over the next half hour or so, she’ll teach them to sit gracefully, engage their imaginations and lead them through fundamental dance exercises. Hicks pushes the little ones, but in subliminal ways. When she tells them to mimic jungle animals, it’s an early lesson in musical interpretation; when she tells them to pretend they’re picking flowers, it’s a building block for proper form in hand movements later.

Everything here is meant to teach one of a million little things that make up the art form, but the tots just see it as play set to music. Energy is burned and giggles radiate like brilliant sunsets over the nearby Boston Mountains.

“Just like other sports, ballet teaches you that you have to be determined and work hard, and it does not come right away.” Rachel Hicks

“Ballet is very, very, very difficult. It really helps kids develop a sense of perseverance, a sense of pride once they reach a goal,” Hicks said. “We live in kind of a microwave society. Just like other sports, ballet teaches you that you have to be determined and work hard, and it does not come right away. You have to have faith that if you work hard enough you will develop and reach your goals as a dancer.”

As small as some of these ballerinas-in-training are, many have already been learning from Hicks for years as have the next two age groups to follow this afternoon. Grace Dickinson, 12 and a St. Joseph sixth-grader, started when she was a little more than two.

“Dance is just a place where I can be myself and let everything go,” she said. “It’s a safe place where I feel comfortable. It’s a challenge sometimes. If I can’t get it right on the first try or second try, I get frustrated with myself. But Miss Rachel is always there to be supportive and be like, don’t worry, you’ll get it in time.”

Hicks had built up a healthy clientele of Catholic students at her Fayetteville studio before packing that in to join the staff of a school in Springdale. A couple of St. Joseph families asked if she would continue to train their children in their Fayetteville homes, but when those spaces were quickly exhausted, the idea to offer ballet at the school was hatched. Dance parents pitched it to the school administration which agreed to rent space to Hicks, initially for a trial class over summer break 2017.

“My daughter had been going to another studio. We tried (Hicks’ class), we liked her, and we switched over,” said Dumond, who teaches Spanish at St. Joseph School. “After that summer I was like, I really would like to keep (Hicks) working at St. Joe, so I offered my room because it’s pretty spacious. I told her if my daughter is going to be involved, I don’t mind helping you out, and that’s how it started.”

Since then, participation has mushroomed to more than 50 students in six classes spread out over two school days. Following the ebullient toddler class, a rambunctious group of elementary school dancers flies through its paces, followed by the willowy senior class that tops out at eighth grade.

“Other kids from the community are now coming to this class,” Dumond said. “(Hicks) has a home school connection because she herself was home schooled. Most of it is St. Joe’s and a handful of home-schooled students, but it is open to the community. It’s up to her who she accepts or doesn’t allow.”

Hicks is not Catholic but has found a home at the award-winning parochial school while forming a palpable bond with her students. She said in addition to the athletic benefits, the ballet lessons also develop concentration and discipline.

“Ballet is so beautiful, but it is difficult and something you really have to work for,” she said. “For schoolwork, it’s very good because they have to think of a lot of different things at once. And that’s very frustrating; they’re like, how am I supposed to do all this? So, it’s very good for their brains because they have to really concentrate and focus if they want to be good.”

Maria Dumond, Jackie’s daughter, is a sixth grader consumed with ballet. She dreams of following this art form into the professional ranks, a goal every bit as challenging and competitive as landing a Division I athletic scholarship or making a pro sports team. Still, the statuesque 11-year-old’s eyes light up when discussing her chosen activity.

“I find (ballet) as a way to express myself without having to worry about finding the right words to say,” she said. “It helps me to kind of just calm down and to really not think about anything at all and relieve stress and worries.”

“I just want to improve my technique and see how far I can go with ballet. It’s really nice having it at the school, because I don’t have to worry about being late to class or having to find a ride. Since it’s right here, I can just go up the stairs and do the thing I love.”

Read more about other school programs that get children moving:

Might as well jump: CTK youngsters show flashy footwork (May 15, 2018)