Bishop Taylor: ‘We will make it through the trying times’

Mandate requires all public Masses, events to be canceled in response to COVID-19 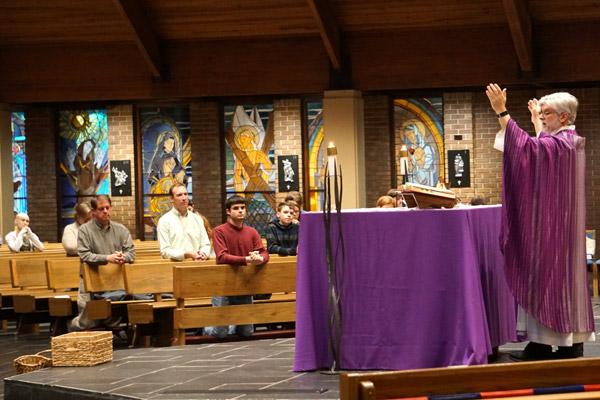 Malea Hargett
Father John Marconi celebrates his final public Mass at Our Lady of the Holy Souls Church in Little Rock March 15 before the diocesan mandate began to prohibit all public Masses through April 30. Attendance was about half of normal for a Sunday Mass.

Malea Hargett
Father John Marconi celebrates his final public Mass at Our Lady of the Holy Souls Church in Little Rock March 15 before the diocesan mandate began to prohibit all public Masses through April 30. Attendance was about half of normal for a Sunday Mass.

In an unprecedented move, Bishop Anthony B. Taylor mandated the suspension of public Masses through April 30, which includes Holy Week and Easter, and other directives in a March 12 letter.

The bishop explained the need to be “proactive rather than reactive.” He also pointed to the elderly and those with weak immune systems who are more at risk and could be compromised in large gatherings, such as a Mass or Lenten activity.

In addition to Masses, non-essential parish gatherings in March and April were canceled or postponed, including previously scheduled confirmation ceremonies. The faithful can pick up palms, which will be blessed privately by priests, outside of their church for Palm Sunday, April 8.

A decision has not been made about the Chrism Mass April 9 at the Cathedral of St. Andrew.

Only RCIA candidates and catechumens entering the Church will be permitted to attend the Triduum, services that start Holy Thursday and end Easter Sunday. Others are encouraged to watch Triduum services online or on television.

Bishop Taylor asked priests to celebrate funerals and weddings in the presence of family only. Confirmation and First Communion Masses will be rescheduled.

The bishop suggested that churches remain open for private prayer and eucharistic adoration at the pastor’s discretion.

Bishop Taylor stated, “Through the hard work of our dedicated health professionals, and with our cooperation and our faith in Jesus Christ, we will make it through the trying times that are sure to come over the weeks and months to come. Although these measures may seem drastic, our faith also binds us together in ways that run deeper than our public gatherings. Let us continue to pray for one another, and know of my fervent prayers for all of you during these times.”

The mandate came after the March 11 announcement that the first presumptive case of COVID-19 coronavirus was confirmed by the Arkansas Department of Health of an individual in Pine Bluff who had traveled out of state. As of March 17 on the ADH website, healthy.arkansas.gov, there were 22 confirmed positive cases in Arkansas, with 41 persons under investigation and 310 monitored with daily check-ins and guidance. There were 197 negative tests.

In a March 11 executive order, Gov. Asa Hutchinson declared a public health emergency. According to a March 11 Arkansas Democrat-Gazette article, the state will receive $6,205,347 for coronavirus preparation and response.

Bishop Taylor stated in his letter that the mandate is not only meant to minimize the spread of the virus, but to “flatten the curve,” to avoid a high spike in cases that would overwhelm local health care providers.

Don Adams, ADH center director for local public health, told Arkansas Catholic that COVID-19 can spread through respiratory droplets of individuals who have tested positive or those who are sick with the virus and do not realize it yet. Droplets can suspend in the air for a period of time and generally fall out within three to six feet, but can extend farther, he said.

“The virus is very good at spreading from one individual to another, so by not congregating in large numbers we can at least slow the spread of the transition of the virus,” Adams said.

While he has not individually consulted religious congregations regarding closures, “We appreciate people being conscious about this and trying to make the best decision they can for their congregation.”

In addition to preventing the health system from being overwhelmed, Adams said, “the more than we can prevent the transmission, the closer we are to a vaccine and treatments.”

The incubation period for the virus is between two and 14 days, from the time someone is infected to when symptoms start showing, which is why large gatherings can be a risk.

“You could be contagious before you start showing symptoms. You don’t know you are sick, you don’t know to isolate yourself or stay away from other individuals,” Adams said. “For some people it’s such a mild illness, they might just think they have a normal cold or upper respiratory infection.”

The CDC reported March 17 there were 4,226 confirmed or presumptive positive cases of COVID-19 in the United States.