Joel and Sarah Wright called to Church after restoring Stations of the Cross, statues 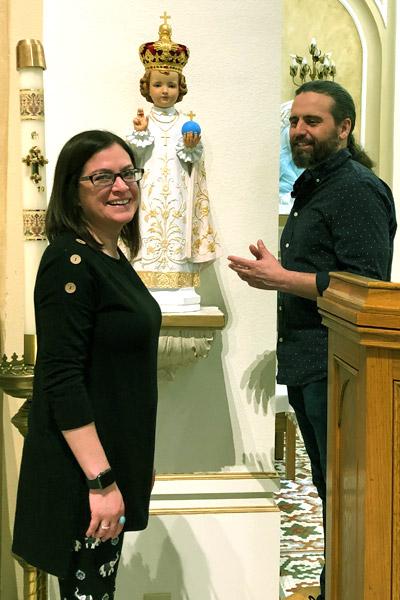 Ginger Wright
Sarah (left) and Joel Wright stand by a statue March 19 at St. Edward Church in Texarkana that they helped restore. They were drawn to join the Catholic Church through their work as artists on the parish’s Stations of the Cross and statues and their relationship with pastor Father James West.

Ginger Wright
Sarah (left) and Joel Wright stand by a statue March 19 at St. Edward Church in Texarkana that they helped restore. They were drawn to join the Catholic Church through their work as artists on the parish’s Stations of the Cross and statues and their relationship with pastor Father James West.

Each brush stroke on a painting, no matter how fluid it is in the moment, is placed with precision to eventually create a masterpiece.

In life, the strokes are merely moments in the bigger picture. There are lighter shades, the joyful turns that can set someone on a new path, mixed with the darker, unexpected sorrows, all swirled together for someone’s life story.

For Joel and Sarah Wright, what began as an artistic job led to a renewed belief in Jesus and ultimately the Catholic faith.

The Wrights will be joining the Church this year at St. Edward Church in Texarkana, amid the uncertainty of the COVID-19 virus and the loss of their spiritual mentor and close friend, Father James West, pastor of St. Edward who died unexpectedly March 8. It was not the place they expected to wind up, after merely taking the job to repaint the parish’s Stations of the Cross and statues.

“Art is everything to me. I don’t think I could have had a spiritual experience if I hadn’t done this job,” Joel Wright said.

Joel, 44, and Sarah Wright, 37, own and operate Joel Wright Art Gallery in Texarkana, offering everything from a tattoo shop, art classes, yoga and various mediums of displayed art, created by the couple and their 11-year-old daughter Ginger.

Married almost 16 years, the family did not feel called to a religion. Joel was not raised in a faith, but found his passion in philosophy.

“I never rejected Jesus’ teachings. I had bad experiences in Protestant churches, but I didn’t know Catholicism’s history,” he said.

Sarah said she was spiritual but not religious.

“I believed in God, but I didn’t have to feel like I had to belong to a religion.”

When an artist in Mississippi was unable to repaint St. Edward Church’s Stations of the Cross and statues, which are more than 100 years old, as part of the church’s remodel and restoration efforts, the Wrights were offered the job in the summer and accepted.

Joel, who always had a bit of a rebellious streak, explained that when he first met Father West and business manager Brenda Engel, he explained he was not religious. Instead, he was philosophically Buddhist, though didn’t subscribe to it as a religion. Father West, who lived in Korea as a child, had studied Buddhism.

“He said there’s no problem philosophically with Buddhism because Buddha is not God. I never met a religious leader or any leader of any kind that was as knowledgeable about philosophy as a whole and was also open and appreciates the aspects of Buddhism as well,” Wright said. “That was a game changer.”

The two immediately bonded and Sarah would also find that deep connection with Father West.

Joel handled the painting of the Stations of the Cross, walking into the church in the summer of 2019 with a nervous excitement.

“I felt like I was about to burn up in flames,” feeling a little more than just the summer heat, he said. “My imperfections became glaringly obvious even on day one.”

He felt a physical touch as he was painting, even though no one was around. This spiritual experience “woke up something in me.”

“I think honestly being in the church for so many hours with the presence of the Eucharist there,” changed him, he said, spending five to six hours a day or more painting in silence, contemplating the Stations.

“I started learning about the different characters and each Station of the Cross and exactly what was happening. I was fascinated by all the details and knowledge, but spending all that time painting and thinking about Jesus is worship in itself,” he said.

Sarah saw a change in her husband, a part of him lit up as “he was literally having a come-to-Jesus moment.”

“He was finally having an understanding of where I have always been,” she said.

But even her direction in faith changed as she began helping him paint the church statues in the fall, including intricate details on Mary’s garment.

“There were times I just had to look at Mary and go, ‘Mother Mary I need you; I need you to help guide me and show me the way. Every time I asked her I felt more comfortable doing it,” she said.

Because Joel created videos of painting the Stations, he was invited by Father West to do a video tour of the updates to the church. They were invited to RCIA classes, if they wanted to learn more, and the classes solidified their desire to become Catholic, Sarah said.

“His non-pressure approach was present throughout the whole experience. It’s really not easy to become Catholic; there’s a lot to do,” Joel said.

On March 2, Father West texted Joel just a few hours before having dinner with the bishop and a few other priests. He wanted the Wrights to join them, to share their story with Bishop Anthony B. Taylor.

“He was so proud for us to tell that story as well,” Joel said, with Sarah adding, “He was so giddy and so happy about that.”

On March 8, Father West was found dead in his rectory at 59 years old. The couple found out via a Facebook post.

“We do view him as our heavenly godfather,” she added.

“I feel like he still has a presence in our lives spiritually,” Joel said.

Joel Wright finished the art restorations the night before Father West’s rosary vigil. In this time of uncertainty with the COVID-19 virus, they’re still taking lessons from Father West to heart.

“Even if we have to wait until next Easter, one thing Father West stressed, it’s a very patient thing, it’s a serious life choice. It’s not something you jump into … I’m accepting things the way they are,” he said of becoming Catholic. “… The Catholic Church has been around for 2,000 years; there’s been plagues, flu pandemics, many, many times and the Catholic Church has lived through it. It may slow things down, but God willing, we’re going to do it.”