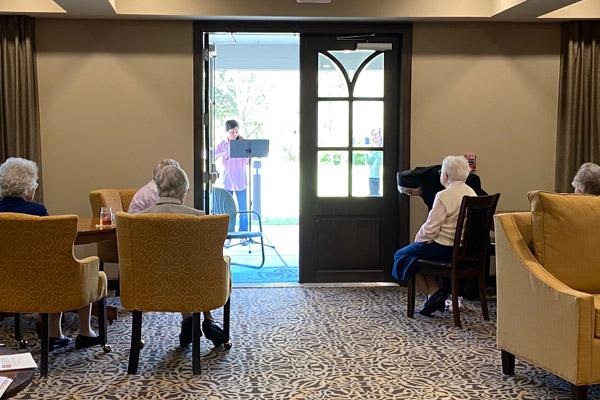 Like all families who are trying to find a sense of normalcy amid chaos in the world caused by the COVID-19 outbreak, religious communities are praying and finding light moments amid the isolation — dyeing Easter eggs, social distancing while celebrating a 104th birthday and being serenaded by a violinist outside glass doors. But they are aware of the deep suffering, lifting the faithful up in prayer.

When Bishop Anthony B. Taylor canceled all public Masses in a March 14 letter, religious communities began or continued to implement protocols for their religious to stay safe. The bishop also announced April 15 that Masses will continue to be canceled until May 18.

Mother Johanna Marie Melnyk, OSB, prioress at Holy Angels Convent in Jonesboro, said 27 out of their 29 sisters (two live in other areas) have stayed at the convent. Ministries from teaching in Little Rock to pastoral care at St. Bernards Medical Center have stopped, other than virtual classes and meetings.

“There’s a fair amount of coming and going and to a certain extent you don’t realize how much until you are home,” Mother Johanna said.

At the end of March, the convent went on total lockdown. Out of their usual 16 lay employees — who are still being paid and some of who are dropping off groceries — three nurses agreed to isolate with the community to care for the infirm sisters.

“Their families are dropping off belongings and food at the front gate. They are that dedicated,” she said. “It’s touching for us; it’s moving that they would make that kind of sacrifice for us.”

Bishop Taylor also dispensed Father Mike Sinkler of his duties at St. Anthony Church in Weiner and St. Bernards Medical Center to isolate with the sisters, celebrating Mass and helping out with cooking and other duties.

If a sister has to go to a significant doctor appointment or the hospital, they will be isolated 14 days in a separate wing.

An extra holy hour has been added to their scheduled daily prayers for all those impacted by the virus.

“We genuinely are counting our blessings,” Mother Johanna said.

Debra Allen, administrator for the McAuley Convent in Barling, which has six sisters, said it stopped allowing visitors in early March and staff working at nursing homes or other places could not come to the convent. Temperatures of all the staff and sisters are taken daily, as at many religious communities. Easter Monday was the first time that no Masses were celebrated at their chapel.

“It’s going to be tough, they don’t like that. They want their priest back,” Allen said of Father Les Farley. who is now staying isolated at St. Scholastica Monastery.

The sisters are staying busy, answering phones, writing thank-you notes, but visiting ministries like at Mercy Crest Assisted Living facility next door for Sister Mary Sarto Gaffney, RSM, has been hard to let go. Allen said even though the sisters live in the same building, they stay in their rooms often and while in the dining room or chapel, they are kept 6 feet apart.

Abbot Leonard Wangler said the 39 monks at Subiaco Abbey have been social distancing, keeping to the corners of tables in the cafeteria.

“This past week or so we have strongly encouraged all of our workers not to come but to do what they can from home,” Abbot Leonard said April 13.

City water workers, cooks and nurses still come on campus to work, but the monks are staying put, with most items being delivered.

“We closed the Coury House (retreat center), the brewery shut down. We’re really just using that for ourselves from time to time as opposed to throwing it out,” he said of some of the monastery-made beer.

On March 14, St. Scholastica Monastery in Fort Smith was closed to the public and focused on implementing guidelines from the Centers for Disease Control and Prevention and Arkansas Department of Health for the 24 sisters. Though some staff are working or isolating at home, those who do come to the monastery, including maintenance, housekeeping, kitchen and nursing staff along with some business personnel all have their temperatures taken upon arrival, said prioress Sister Kimberly Prohaska, OSB. While they didn’t have an Easter Sunday Mass, chaplain Father Farley has been celebrating Masses for them, including Easter Vigil.

“We did the vigil very, very simplified, much more than we were accustomed,” Sister Kimberly said. “We were also trying to do that in solidarity with those unable to go to Mass.”

Even though the Carmelites with the Carmel of St. Teresa of Jesus in Little Rock are a cloistered community of 12 sisters, the outbreak has caused them to be more closed off. Maintenance and housekeeping, though still paid, are not coming into the building, while a nurse’s aide does come to care for infirm sisters. Father Thomas Marks, their main chaplain, and Msgr. Lawrence Frederick from Catholic High School, have celebrated Mass for the sisters.

“We need to keep people at a distance. It’s really worked out well. The people who come here, they are all mindful of that; they’re all practicing social distancing and wearing masks. I’m just inspired by all these people,” said prioress Sister Lucia Ellender, OCD.

Despite the isolation, they’ve tried to stay optimistic. For Easter at Holy Angels, the sisters dyed eggs with food coloring and whipped topping and had a marshmallow bar with different sauces and sprinkles. On Easter Monday, they had a movie night watching the 2019 movie “A Beautiful Day in the Neighborhood,” with Tom Hanks as Mr. Rogers.

“We’ve got so many teachers and retired teachers in the house who have this great love for children and Mr. Rogers. I think it was a very positive uplifting movie for us,” she said. “We’re trying to be creative and do some things like that. It is unusual for all of us to be together. It’s just nice to have everybody at home.”

While the eight sisters from St. Scholastica Monastery who live at Chapel Ridge nursing home couldn’t have visitors, the sisters displayed a colorful Easter poster with messages and passed along Easter treats and candy. Sister Kimberly said they’ve also been writing to the sisters daily.

But beyond the movie and pizza nights and other moments of bonding, the sisters are “holding each other up by prayers.”

“I think sometimes we feel oversaturated by the COVID-19 event, but so many people need our prayers,” Sister Kimberly said.

In Barling March 28, Sister Mary Laurene Favre, RSM, celebrated her 104th birthday and Sister Betty Ann Elmer, RSM, her 75th, with everyone 6 feet apart. Allen said they hope their families can celebrate with them at a later time.

“I think it’s just remembering to keep social distance and listen to the CDC people more so than the government. I think we have to pay attention to what the scientists are saying and the CDC guidelines,” she said. “ ... If we come back too fast, if we start letting people go out and go back to work, we’re going to have a relapse because we haven’t peaked in Arkansas yet.”

The extent of the virus has hit home for monks at Subiaco as Father Elijah Owens, of Subiaco Abbey, has been studying in Rome for the year, finishing up his doctorate in liturgical studies at the Benedictine Abbey of Sant’Anselmo, through the Pontifical University of Sant’Anselmo. Abbot Leonard said Father Owens’ abbey has been on a “severe lockdown,” mostly staying in their rooms and not socializing.

“He just emailed today and they were very, very fortunate that they did not have anything (COVID-19) there in that particular monastery,” Abbot Leonard said April 13.

Sister Lucia said the public chapel at the Carmelite Monastery, which is separate from the sisters’ chapel, is still open for prayer.

“There’s a man who comes every Sunday, sits in the chapel” and reads the Mass with a missalette, she said. “He’s there in prayer. It’s beautiful to see that.”

“Even though we feel the heaviness of this time of the people, we know Jesus has been victorious; he has already won the battle,” Sister Lucia said. “I guess you might say the silence and hope, we feel more drawn to silence in prayer and just hoping. It could be the opposite way around despair if we didn’t have any faith. But no, we have faith. Instead of asking why, we know that Jesus has won the victory. We are here as a sign of hope.”