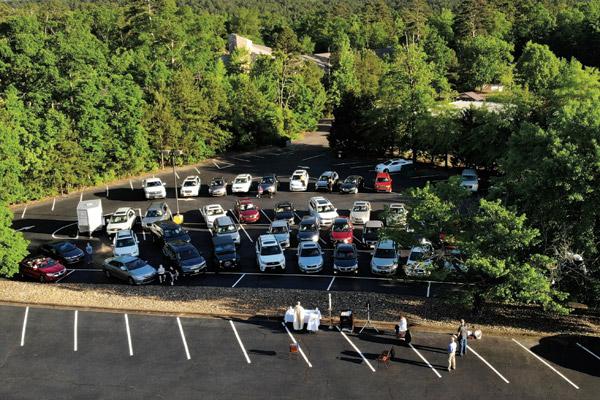 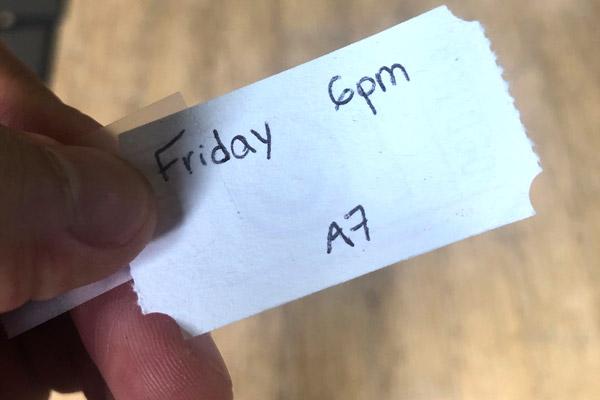 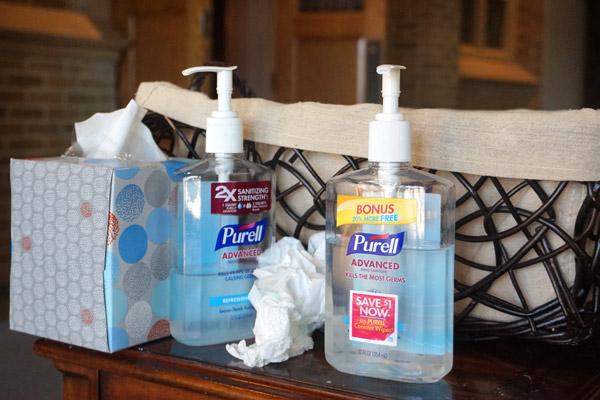 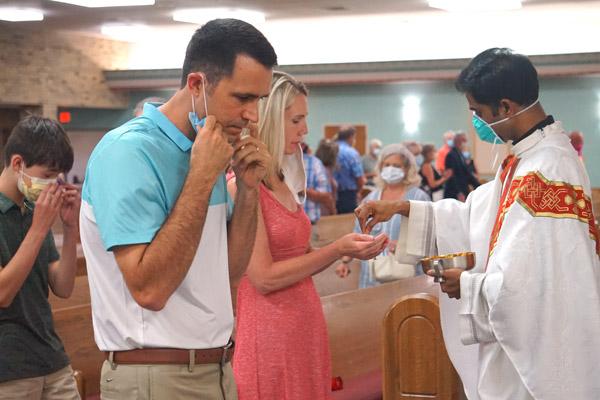 Aprille Hanson
Matt Mallett moves his mask back over his face as his wife Meghan and family line up to receive Communion from associate pastor Father Chandra Kodavatikanti at St. Joseph Church in Conway June 6.

Aprille Hanson
Matt Mallett moves his mask back over his face as his wife Meghan and family line up to receive Communion from associate pastor Father Chandra Kodavatikanti at St. Joseph Church in Conway June 6.

Arkansas Catholic surveyed parishes June 24-25 to ask them how Mass attendance is going for them since public Masses resumed in mid-May. All parishes are restricted to 25 percent seating capacity.

For English weekend Masses, parishes reported their building capacity on average is:

For Spanish weekend Masses, parishes reported their building capacity on average is:

In early May, masked Catholics, armed with hand sanitizer and a mindset of keeping 6-feet distance between themselves and fellow parishioners, began filing into the pews of their parishes for Mass, something that hadn’t been possible for two months.

Bishop Anthony B. Taylor reinstated public Masses in a May 4 letter, issuing several guidelines that parishes must abide by, as the threat of the COVID-19 virus has yet to dissipate. The Sunday Mass obligation is still lifted.

While the spirit of the Eucharistic celebration remains unchanged, the look of a Mass is empty, allowing for only 25 percent seating capacity within a church. Instead of incense, Purell and disinfectant hang in the air. And there are no hugs or handshakes, but hand waves and greetings from a distance.

“The experience at Mass and when you see everyone with their masks on, well, this is what we’re doing for now, it’s not what we want. But it’s kind of what we’ve been dealt. It’s kind of the way life goes; we don’t always have life the way we want it,” said Father Tony Robbins, pastor at St. Joseph Church in Conway. “The point though is not to become too afraid, but to allow it to become an opportunity for growth and faith and maybe a purification of our intentions.”

In preparation for an influx of parishioners of St. Raphael in Springdale and St. Joseph Church in Tontitown, pastor Father John Connell began giving out tickets to Masses, a way to insure the numbers would stay within the guidelines, and scheduled more Masses. St. Raphael is the largest parish in the diocese, with about 24,500 parishioners.

“We had no idea how many people were wanting to go to Mass,” he said. “... That first weekend, attendance was so low.”

At both parishes, Father Connell estimated they are at 12 to 13 percent capacity for Mass, not close to the 25 percent allowed. They have stopped the ticket giveaways and Masses are back to two at St. Joseph and the eight usual Masses at St. Raphael, with just one additional Mass.

“We’re completely stagnant,” he said, saying at St. Raphael, there are about 800 people on a weekend, when normally, it’d be about 5,000. Two virtual Masses are still offered for St. Raphael.

“I don’t know if that’s been (because) we’re in an area where COVID is on the increase,” he said.

Half of the new COVID cases were documented in Benton and Washington counties. As of June 15, Arkansas Department of Health statistics showed 12,917 total cases (4,383 active), with 1,480 in Benton County and 1,925 in Washington County.

Father Connell admitted one parishioner told him, “Father, I’m not going to Mass; I can’t pray and have a mask on.”

Father Connell, also diocesan vicar general, said it will take at least a year to really see how COVID has impacted Church attendance.

“First of all, we’re in the middle of a pandemic. This is not a time to come back and celebrate” with singing and sprinkling holy water, he emphasized. “Am I worried about some people not coming back? Yeah, that’s a possibility, not in the long run.”

Each Mass in Springdale has about four monitors that help enforce distancing, entering and exiting properly and ensure just one person is in the bathroom at a time.

In Conway, Father Robbins said there’s been a slow rise in attendance since the opening Masses May 9-10, with roughly 130 attending the 8 a.m. Sunday Mass May 31, the largest group thus far for a typical Mass. St. Joseph High School graduation May 18 had 220 people.

St. Joseph has about 5,500 registered parishioners.

“When you look out there it’s strange because 250 is the max, but only a quarter full. You’ve shrunk down your church, but there’s a lot of empty space out there, but it’s kind of what we’re going for,” he said.

Father Robbins, and associate pastors Fathers Chandra Kodavatikanti and Jeff Hebert, instruct people coming into Mass to use hand sanitizer, the priests distribute Communion with masks and dismiss people in sections and to different exits. Beginning the weekend of June 6, some ministers and ushers began taking over some of those roles of directing parishioners.

A parishioner sprayed down the church with a disinfectant fogger.

“It’s going to kill everything that’s in there and leave kind of a protectant coat so nothing will be able to grow for like three months. We’re still going to need to wipe down between Masses. I believe we’ll probably make use of that again,” including at the school, Father Robbins said.

Some Masses are still live­streamed, which will have benefits that reach beyond the pandemic. One instance involved a hospitalized parishioner who watched Mass with her mother in another state. When the mother could not attend her daughter’s funeral, the parish livestreamed it.

“It continues to be a great blessing,” Father Robbins said.

Parishioners at Sacred Heart of Jesus Church in Hot Springs Village returned to Masses Mother’s Day weekend May 9, but some parked and never went in. In addition to weekend Masses inside the building, allowing for about 150 max for 25 percent capacity, Father Bill Elser began holding a Saturday parking lot Mass. Attendance to the parking lot Masses have risen, from 61 cars the first time to 101 cars May 30. Initially using just a loudspeaker, the parish now has an FM transmitter, what St. Anne in North Little Rock uses for their parking lot Masses, to broadcast on parishioner’s radios.

“We had the cars parked fairly close to each other so everyone could participate; we brought Communion to them … their arms out to put Communion in their hands,” Father Elser said.

“It seems to be really serving our mostly elderly population who are not comfortable coming into church or wearing a mask or both. From the first week on, we just got wonderful comments,” he added.

Sacred Heart has about 1,200 parishioners, who on average are over age 70.

“With the vulnerable population, we make it clear it’s not obligatory now, it’s only as you feel comfortable coming. We provide the masks if they need a mask and things like that … It doesn’t surprise me because it’s the older Catholics in general whether it’s obligatory or not,” they want to attend, he said, adding of the outdoor setting, “... It seems to be leading more and more to be coming out and feeling comfortable to come out.”

While the Mass has changed notably for all, Latino Catholics who thrive on the communal aspects of being a part of a parish, it has been tough, Father Mauricio Carrasco said.

“Relationship is so central to everything we do. Both our Charismatics and Youth for Christ movement, the young adult movement … man, it’s hard on them because there was such a big social component to their faith,” he said.

He is pastor of St. Augustine Church in Dardanelle, about 375 members, and St. Andrew Church in Danville, about 350, that has a predominantly Latino population, with St. Andrew only celebrating Spanish Masses.

“It’s hard to put words to it. It’s kind of something you feel; I feel it as a pastor. I could be projecting to some extent, because I’m missing some of the social interaction, but they seem downcast, they seem sad. I think we were all maybe in some way or another,” he said.

The weekend before public Masses reopened, to make the new structure easier for everyone, he labeled all the pews with letters and measured out the seven seats within a row, separating it into appropriately distanced sections with help from Deacon Daniel Velasco.

“It’s like going to a theater or ballgame. Your season tickets,” Father Carrasco said.

Families came in a drive-thru fashion, with Father Carrasco handing out tickets for each family member, crossing off seating with his paper and clipboard. Each family had to pick which Mass they planned to attend each week and stick to it. Their spots do not change.

“What it does is it keeps people from having to worry too much … if you’ve been to the grocery store there’s signs galore. It becomes pretty overwhelming, because this stuff is not second nature to us,” he said.

Arkansas Catholic surveyed parishes June 24-25 to ask them how Mass attendance is going for them since public Masses resumed in mid-May. All parishes are restricted to 25 percent seating capacity.

For English weekend Masses, parishes reported their building capacity on average is:

For Spanish weekend Masses, parishes reported their building capacity on average is: