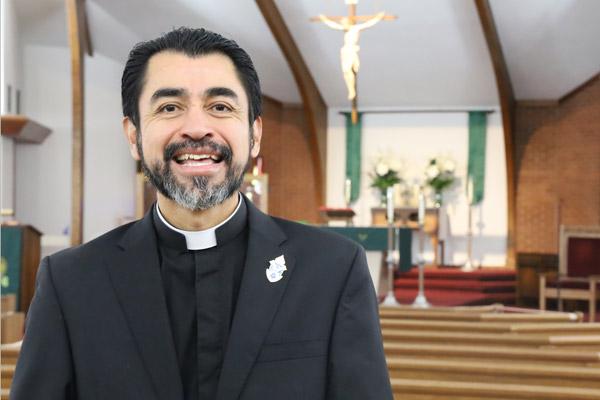 Dwain Hebda
Deacon Daniel Velasco pauses a moment July 23 in the sanctuary of St. John Church in Russellville, where he has served as a deacon since May. He is a native of Puebla, Mexico.

Dwain Hebda
Deacon Daniel Velasco pauses a moment July 23 in the sanctuary of St. John Church in Russellville, where he has served as a deacon since May. He is a native of Puebla, Mexico.

• Favorite Scripture: “And Mary said: ‘My soul proclaims the greatness of the Lord; my spirit rejoices in God my savior. For he has looked upon his handmaid’s lowliness; behold, from now on will all ages call me blessed. The Mighty One has done great things for me, and holy is his name. …’” (Luke 1:46-55, The Magnificat)

It doesn’t take much thought on Deacon Daniel Velasco’s part to pinpoint what brought him from skeptical discerner to the threshold of ordination. At every step on his vocational journey, there’s been one figure most conspicuously guiding his steps: the Virgin Mary.

“One interesting fact, when I submitted my documents to the diocese back in 2014, it was the day of the Annunciation,” he said. “And I remember that morning, when I was doing my prayers, I was still feeling very hesitant about submitting my papers. I was still struggling through that process and if this is my call or not. And I remember during that prayer thinking there’s something special about Mary’s ‘yes’ at Annunciation and how she was really unafraid.

“Six years later, our graduation was scheduled for May but was delayed and now the day of the ordination is Aug. 15, the Assumption of Mary. And then a parishioner, who is very devout to Our Lady, said to me, ‘Remember, also, you are being assigned to Immaculate Conception Church (in Fort Smith.)’ So yes, I think there is something about Mary’s presence in all of this.”

The first priest his home parish, St. James Church in Searcy, has ever produced, Velasco said making the decision to become a seminarian later in life, at age 40, gave him the maturity and perspective to successfully pursue his vocation. Now, with ordination in sight, he’s better prepared for the kind of comprehensive priestly ministry he wants to have.

“One thing that you learn through seminary is understanding your gifts and your areas of opportunity,” he said. “I know I’m a good listener, I know I’m good with people and am relatable. I think I show people that I care and I always thought that would be useful in the pastoral side, like in the Sacrament of Reconciliation and hospital ministry.”

“But we are also asked to look at our areas of opportunity, and I have become more aware of the importance of other areas, things I might not have thought that’s where I could shine, like preaching. Now I can see OK, you can have this pastoral presence with the people but there’s also the pastoral side of the liturgy, too. There’s nothing more pastoral than bringing a beautiful liturgy to the people.”

As he stands on the brink of his priestly ordination, Velasco admitted some
elements of the past few months have been bittersweet. Not only did COVID-19 not allow him and his classmates to finish their seminary studies in person, the pandemic is limiting the number of people who can attend his ordination, including his parents who live in Mexico and won’t be able to attend.

But he also said he felt grateful for the many people along the way, his surrogate family in faith, who had helped him get to this point.

“Thank you for all the prayers and support; through the years there’s been way too many people to recount who have done that,” he said. “Even the people that I encountered maybe just once, where our lives crossed paths either through ministry or at seminary or at the hospital, thank you. And please don’t forget to continue to pray for me now. The journey is really just getting started.”

• Favorite Scripture: “And Mary said: ‘My soul proclaims the greatness of the Lord; my spirit rejoices in God my savior. For he has looked upon his handmaid’s lowliness; behold, from now on will all ages call me blessed. The Mighty One has done great things for me, and holy is his name. …’” (Luke 1:46-55, The Magnificat)

Through life’s changes, God is still there