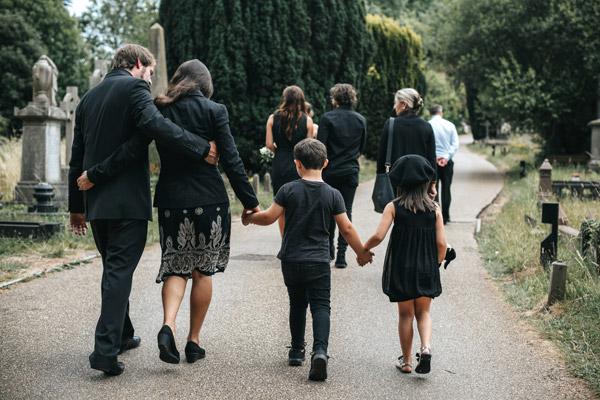 Rawpixel.com
Making the decision about whether to be buried, cremated or donating a body to science requires prayers, said diocesan bioethicist Father Jason Tyler. Because Catholics believe in the resurrection, a body is more than a vessel for the soul, and must be respected even in death.

Rawpixel.com
Making the decision about whether to be buried, cremated or donating a body to science requires prayers, said diocesan bioethicist Father Jason Tyler. Because Catholics believe in the resurrection, a body is more than a vessel for the soul, and must be respected even in death.

Founded in the teachings of Jesus and his example of burial following his death on the cross, “bury the dead” is one of seven corporal works of mercy.

“The way a person is laid to rest we see as important in that largely because we believe the body has dignity, has a real dignity; not only the living body which is united to the human soul,” said Father Jason Tyler, pastor of St. Joseph Church in Fayetteville and diocesan bioethicist.

“The body continues to have dignity even when the soul is separated. We believe ultimately at the end of time, the body and soul reunite. So the body is treated with real respect for where it’s been and where it’s destined to go in the future.”

While the Church had a long history of not allowing cremations, Father Tyler said that teaching stemmed from an atheistic practice.

In 1963, the Vatican Congregation for the Doctrine of the Faith permitted cremations, as long as the motive was not a denial of the Christian belief in the resurrection. In 1983 it was incorporated into canon law..

“Motives for cremation changed. Now when someone asks to be cremated, it’s often a financial decision,” Father Tyler said.

The National Funeral Directors Association cited 54 percent of deceased people were cremated in 2019.

Father Tyler added there are practical reasons for cremation, especially if a funeral cannot happen immediately, which is particularly relevant during the COVID-19 pandemic.

“I’ve had two to three funerals the past two to three months for those who have died several months ago. They were cremated and waited until now,” he said.

There’s not a Church teaching on how long to hold a person’s ashes before burial, though it “should happen relatively soon” if possible, Father Tyler said. It is largely a pastoral response, particularly when cremains are being buried in another state or country. In those cases, a family can still have a funeral Mass, and sometimes ashes can be kept at a church until burial.

Even though there may be some Catholics still wary of being cremated, “All is possible with God. God is not limited by states of matter and different things happening there. Some die in such horrible circumstances that (not even) a part of their body can be buried and that person is not prevented from the resurrection,” Father Tyler said.

“To Rise with Christ” reiterates that even cremains must be buried, stating, “In order that every appearance of pantheism, naturalism or nihilism be avoided, it is not permitted to scatter the ashes of the faithful departed in the air, on land, at sea or in some other way, nor may they be preserved in mementos, pieces of jewelry or other objects. These courses of action cannot be legitimized by an appeal to the sanitary, social or economic motives that may have occasioned the choice of cremation.”

The Congregation for the Doctrine of the Faith stated in 2016 that having a memorial in a church or other appropriate place that includes the name of the deceased can help rectify the situation when a person’s ashes are already spread. Labeling a tomb or urn publicly also is an expression of the belief in the communion of saints, he added.

Father Tyler said keeping ashes together goes back to respecting a body.

“Just like you would not take a body and cut it in various pieces, you also don’t want to divide up someone’s ashes, or try to preserve someone’s body in our house,” he said.

Donating a body to science is also an acceptable practice in the Church. It’s important to set that up with a medical school and discuss it with loved ones before a person’s death.

“It should be in your will and communicate that to your loved ones so they know that is going to happen,” Father Tyler said. “After you die, your body is given to (a) school or university for study purposes” and is often cremated and given back within a few months. A family can then choose to receive the ashes, which is customary for Catholics so the remains can properly be buried.

Father Tyler said most funeral Masses take place after the cremains are returned, but a family can also choose to have a memorial Mass immediately.

“You’d have the same readings and prayers, but there would be no body or cremains present, so no blessing the body at the entrance with incense … when the cremains come back from the medical school, you can have a burial rite at the cemetery,” he said.

Choosing one way or the other ultimately comes down to what the family is most comfortable with, having the immediate option to mourn or giving it time, which can help when gathering family from other states.

“Donating a body to science is a good thing. It’s an act of charity, similar to donating organs,” Father Tyler said. “... By donating, future doctors learn to operate on the human body.”

He also said it’s common for people to make their own arrangements for burial at a church cemetary or columbarium and occasionally, parishioners come in to plan songs and readings for their funeral. However, he said it’s important to keep a copy of those plans with the family as staff and priests at a parish can change.

Most importantly, the faithful should turn to prayer when deciding what is best for burial.

“One would hope our funeral rites and the way we are buried reflects our faith,” Father Tyler said. “Prayer is more important as well because we want to make sure our final disposition does indeed reflect our faith in God’s goodness here and now and his promises of eternal life."

Click for the The Catholic way of death index