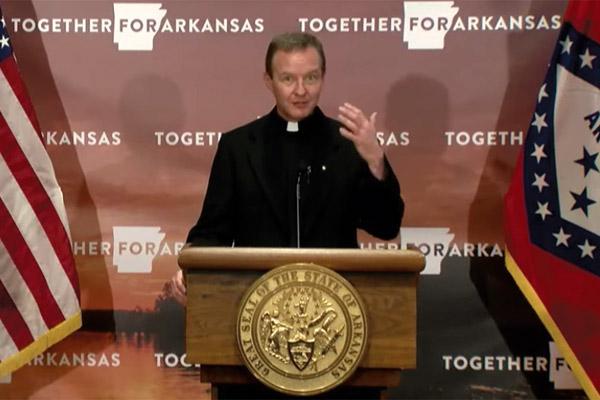 Click here to read Bishop Anthony B. Taylor's statement regarding Mass obligation that resumed in October, but without compromising safety protocols.

The state reported 3,381 Arkansans who contracted COVID-19 had attended a church service in the previous two weeks.

During his weekly press conference Nov. 10, Gov. Asa Hutchinson said Pulaski County, with the state’s highest population, had the most cases in that category with 251 to 300 cases from May 3 to Oct. 4. More than 150 cases each were reported in Craighead, Pope, Benton and Washington.

No cases are known to have been contracted within Catholic churches in the state, Dr. Sandra Chai, senior physician specialist at the Arkansas Department of Health who works with churches on their COVID-19 guidelines.

“We are not aware of any transmission in Catholic churches,” she said as of Oct. 4.  ‘That remains a stunning accomplishment.”

“It isn’t a question, ‘Do I want to wear a mask or not?’ In the practice of charity, in the practice of justice, we need to be conscious of other people ... It is an opportunity to practice those aspects of our faith that we profess.” Father Erik Pohlmeier

As a result of the surge in cases in the country and state, new state guidelines were issued Nov. 10, encouraging everyone inside churches to wear a mask, especially while singing. Medical exemptions are allowed.

Ministers and singers are also exempt if they are at least 12 feet from the congregation. Choirs and performances with wind instruments are discouraged.

“Masks need to be worn at all times by all congregants, except those who are under ADH guidelines,” the guidelines stated.

Each family group -- whether the service is indoors or outdoors -- should be at least 6 feet apart.

“We respect the separation of church and state; they make their decisions based on their own governance and how they handle things, but we do provide guidelines and we ask them to take into consideration from a public health standpoint,” the governor said.

“Unmasked congregational singing,” even if they were distanced, was blamed as the primary reason for the spread in churches, Chai said.

“It doesn’t mean people are not being careful,” the governor said. “It simply means when you have congregants together there is a risk associated with it.”

The Diocese of Little Rock has followed the current state guidelines since it reopened public Masses in May. Bishop Anthony B. Taylor has required that everyone wears a mask except for when clergy and a lector are proclaiming the readings.

Maximum capacity was initially set at 25 percent when the state said large venues like churches could reopen, but increased to 66 percent in June.

Outbreaks have been reported inside Arkansas churches. In June, First Pentecostal Church in North Little Rock reported 34 cases. During a service Nov. 8, hundreds of members did not wear masks or stand 6 feet apart. A choir and band performed during the service.

During the governor’s press conference Nov. 10, Father Erik Pohlmeier, pastor of Christ the King Church in Little Rock and diocesan faith formation director, was invited to speak about the need for safety precautions in churches.

“We have worn masks at all times in our churches since we began in May and that has been a great benefit to us,” he said. “We have been able to maintain our distancing. We even created maps of our church, and we are grateful for extra volunteers who have ushered people to their seats so they can sit at a distance from other people … We have also maintained wearing masks while singing, having only a cantor leading the singing, standing behind Plexiglas to minimize the spread.”

He said it will take perseverance for churches to remain faithful to the precaution.

“In times of crisis we want to rely on our faith even more,” he said. “The opportunity to worship is of supreme importance for us. It allows us to come together as a community of faith, to find solidarity in our shared struggle against the face of this pandemic, but it also gives us a chance to be strengthened by God himself.

“It isn’t a question, ‘Do I want to wear a mask or not?’ In the practice of charity, in the practice of justice, we need to be conscious of other people, other people who might be more vulnerable than we are. It is an opportunity to practice those aspects of our faith that we profess.”

Chai said the Diocese of Little Rock’s requirements are an example for all churches in the state on how to have public worship while keeping members safe.

Northwest Arkansas has the most cases in the state, followed by Northeast Arkansas and Central Arkansas.

“The numbers aren’t good,” Hutchinson said. “The trend isn’t good. We have a lot of work to do in Arkansas and across the state, and we are in for a very challenging time.”

Click here to read Bishop Anthony B. Taylor's statement regarding Mass obligation that resumed in October, but without compromising safety protocols.