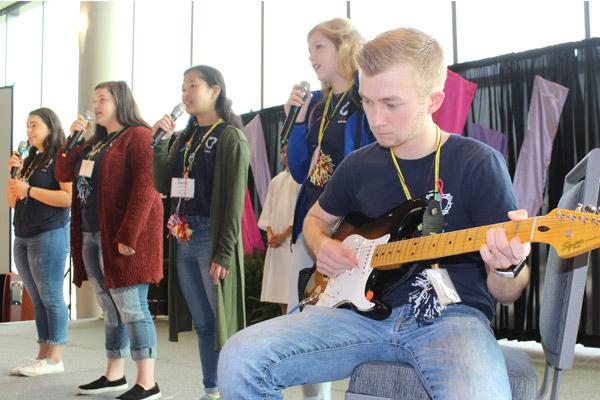 Geovanni “Geo” Rivera can attest there’s little that rivals the “spiritual high” of experiencing a conversion of heart, surrounded by fellow Catholics at a diocesan youth ministry event.

“Mostly just getting around the people and getting the same feel as I did last year and trying to get back into that spiritual high that everyone gets in retreats and stuff like that,” the 19-year-old Youth Advisory Council member said.

“It just feels really right and good to be beside other people my age who have the same ideas,” he said.

Making sure teens maintain a strong connection to their faith is a top reason why the diocesan Youth Ministry Office is looking toward in-person events for 2021, while maintaining strict COVID-19 safety protocols. However, that won’t happen until summer.

The diocese’s annual confirmation retreat, usually drawing 200 to 250 in February, and April’s Catholic Youth Convention, typically attended by 400 to 600 people, have both been canceled. The popular Catholic Charities Summer Institute, known as C2SI, is also canceled.

Liz Tingquist, director of the Youth Ministry Office, said she polled youth ministers about making these events virtual. Because teens are “tired” of anything virtual, they decided against it, she said. Many teens who signed up for the Steubenville youth conference did not show up for the virtual offering.

The 24 teens involved in the YAC leadership have met monthly on Zoom since August. They have built their online presence on Instagram, @yacdolr.attack, with 279 followers, posting Scripture and faith-based inspiration with a teen perspective to keep the youth engaged.

On the bright side, the theme for the year, “United through Faith” will be on display during a June 6 outdoor rally at St. John Center in Little Rock. With mandatory masks and social distancing, Tingquist hopes to draw about 300 teens for the daylong event with Mass, praise and worship music, food trucks and national Catholic speaker Steve Angrisano. Each attendee must sign a diocesan COVID-19 waiver.

“I think there’s a lot of enthusiasm; kids are just dying to do something,” Tingquist said. “We want it to be very upbeat and celebratory.”

But the event will also acknowledge the stress teens have experienced during the pandemic, with a handful of YAC members giving short testimonies  about how they overcame fear and anxiety with faith, Tingquist said.

“If we don’t do a retreat we’re going to lose all of our leadership,” said Tingquist, explaining that  the peer-run retreat is for juniors and seniors, with previous Search attendees stepping into leadership roles for future retreats. With no retreats in 2020, there are fewer leaders from 2019 Searches that can step forward to lead retreats in 2021.

Tingquist said about 30 teens could attend instead of the usual 50.

Estella Gomez, 17, a parishioner at St. James Church in Searcy and YAC member, attended Search #147 before the pandemic. She hopes to be a part of the leadership team.

“I feel like it’s important because after last year, I can definitely say a lot of youth have started doubting faith, and I feel like Search would help … to light that spark and reconnect with the Lord,” Gomez said.

In the fall, Tingquist said the Youth Ministry Office will resume its usual programs, including another Search retreat and junior and senior high rallies.

“We’ll take it as it comes,” hoping it will be safer to meet, Tingquist said.

While parish youth ministries are offering some programs to teens, having the experience of diocesan youth ministry helps them get a taste of the universal Church.

“When they see the large Church and get the large Church experience, they realize Catholicism is strong in numbers, and they are not the only person who is Catholic,” Tingquist said, but added it's not the teens she has to convince typically, but the parents.

“You have to put it in perspective. Your life is really, really busy. But is it so busy that you don’t have time to help get your kid to heaven? I’ve seen the difference in kids who are really involved and what they do in their later life in the Church,” Tingquist said.

Craving God in his silence is proof he with us