Bishop Taylor calling on Arkansans to welcome those who helped the U.S. military 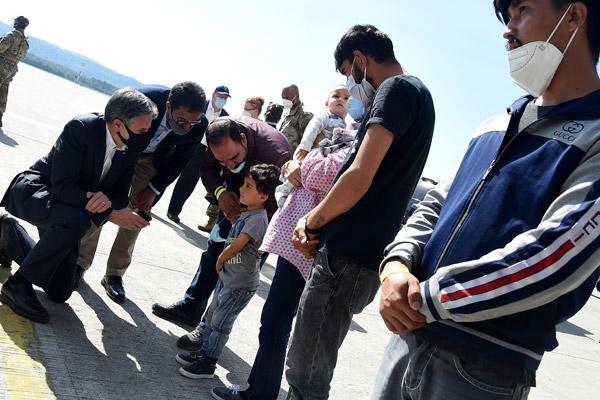 CNS photo/Olivier Douliery, pool via Reuters
U.S. Secretary of State Antony Blinken speaks with a child as he meets an Afghan refugee family at Ramstein Air Base in Germany Sept. 8, 2021.

CNS photo/Olivier Douliery, pool via Reuters
U.S. Secretary of State Antony Blinken speaks with a child as he meets an Afghan refugee family at Ramstein Air Base in Germany Sept. 8, 2021.

Here’s how to help

If you would like to send a monetary donation to the Catholic Charities of Arkansas Refugee Resettlement program, click here and select refugee resettlement in the drop-down menu.

Catholic Charities of Arkansas will resettle up to 49 Afghan refugees who fled their country following the return of the Taliban.

In a press release Sept. 16, Gov. Asa Hutchinson announced 98 Afghan refugees would be resettled in Arkansas with assistance from faith-based organizations and local sponsors. Half will be resettled by the Diocese of Little Rock’s Refugee Resettlement Office through the United States Conference of Catholic Bishops' Migration and Refugee Services. Canopy Northwest Arkansas, which is affiliated with Lutheran Immigration and Refugee Services, will settle the others.

The withdrawal of U.S. military forces from Afghanistan after 20 years of conflict and collapse of the Afghan government have created a pressing humanitarian crisis as Afghans who helped overthrow the Islamic militants were forced to leave the country.

More than 100,000 civilians seeking asylum have been evacuated from Afghanistan as part of the U.S. State Department's Afghan Placement Assistance Program. They are waiting in airports and military bases around the world before they are relocated.

"So many people locally want to help. The support from not only Catholics but also the Protestant, Muslim and Jewish communities has been overwhelming. I have never had so many emails in my inbox. The interfaith community has really stepped up." - Jennifer Verkamp-Ruthven, director of Catholic Charities Immigration Services

"About three weeks ago, we received word that we would resettle Afghanis," said Jennifer Verkamp-Ruthven, director of Catholic Charities Immigration Services. "There are over 50,000 that are here in the United States being processed. At this point, I've been told that we'll resettle probably up to 49 refugees. If we find that we have the capacity to do more, we will."

The rapid increase in clients for the resettlement office will be a jolt to the Catholic Charities staff. With a major reduction in the number of refugees allowed into the United States since 2017, Verkamp-Ruthven said her office hadn't resettled someone in five or six years. Trying to do it during a pandemic has created additional obstacles.

The first refugees will arrive at the beginning of October. Resettlement takes about six to 12 weeks to complete.

"We're scrambling," she said. "We've reached out to the interfaith community in Little Rock for help. We've formed sponsor teams who are adopting families and helping with providing housing, furnishings, clothing and food for as soon as they get here. We hosted training over Zoom and had the chairwoman at the Medina (Institute) mosque talk about the Islamic faith and things to be aware of. She had one of her contacts, an Afghan refugee from the '80s, speak about their culture and what it was like to relocate to the United States. It's been very late nights with lots going on."

Verkamp-Ruthven said the refugees served by Catholic Charities would be housed within a 100-mile radius of Little Rock. She and refugee resettlement specialist Rebecca Bryant will serve as caseworkers to help relocated Afghanis find employment, enroll in school, English second language programs and cultural orientation classes and meet with the Social Security Administration to aid their assimilation.

"We were told that the first groups of people to evacuate maybe had a little bit more time, and they might be coming with, like, maybe two sets of luggage," she said, "but the groups that have come in since then -- that I think will be a lot of who we're going to resettle -- pretty much have nothing. They had to go as fast as they could, so they won't have many belongings at all."

Gov. Hutchinson and Bishop Anthony B. Taylor are calling on Arkansans and the state's Catholics, respectively, to welcome the Afghan refugees relocating to Little Rock. Most refugees assisted U.S. troops, diplomats and humanitarian personnel by providing translation, interpretation, security, transportation and other vital services, often at significant risk to themselves and their families.

Bishop Taylor called on the faithful to show compassion.

"As Christians, we are called to do all we can to help our brothers and sisters in their time of need," he told Arkansas Catholic. "Moreover, most of us are ourselves, the descendants of immigrants who came to this country in their time of need. Having been given refuge here ourselves, at least in the person of our ancestors, we are all the more obligated to extend a welcome to immigrants today, and especially to refugees who often come here fleeing for their very lives."

"We've got the most secure system for processing refugees in the entire world -- multiple security clearances, multiple health clearances to make it all work," she said. "The people who are coming are people who helped us. They're not anti-American. There's going to be a mix of people who worked for the government, journalists, female educators, activists, athletes. They're leaving a horrible situation, literally fleeing for their life. People don't just decide one day to leave their homes and go halfway around the world. No one wants to leave their home, family, all their things.

"A lot of people in Arkansas have a pro-life outlook," she said. "This is a pro-life issue."

Verkamp-Ruthven said communication is one of the top concerns when dealing with refugees. According to Translators without Borders, a global community of language specialists who offer translation services to humanitarian and development organizations globally, there are between 40 and 59 languages spoken in Afghanistan. Dari, or Farsi, and Pashto are the nation's official and most widely used languages, spoken by 77 percent and 48 percent of the population, respectively. Only 6 percent of the Afghan population speaks English.

When refugees arrive in Little Rock, they will be met at the airport by a volunteer sponsor

team, which will be joined by an interpreter, either in person or on a mobile phone, to greet them and take them to temporary housing. Within 24 hours of their arrival, caseworkers will visit to ensure they are moved in and begin assimilation.

A primary goal is to keep refugees as geographically close as possible to make the move more comfortable.

"There's not a huge Afghan community or culture here," Verkamp-Ruthven said. "We've got people coming in that are traumatized. They're adjusting to lots of different things culturally, religiously that we're going to have to be sensitive to. They're going to be in culture shock.

"We're working on getting interpreters lined up from the local mosques that can help.

"We're having to be creative to make sure that they have someplace that is welcoming, like an apartment complex where several of the families could go to form community, while at the same time being close to a local mosque, their place of employment, the grocery store and public transportation so they can walk or maybe take the bus to where they need to go."

The government's APA program will provide relocated Afghans 30 to 90 days of assistance, case management, and $1,225 per individual. While Catholic Charities will receive some funding for refugees from the federal government through the USCCB, Verkamp-Ruthven said monetary donations are needed and preferred to goods to reduce concerns with logistics, storage and distribution.

In the days since Gov. Hutchinson’s announcement, Verkamp-Ruthven said she'd received an outpouring of offers of support.

"So many people locally want to help. The support from not only Catholics but also the Protestant, Muslim and Jewish communities has been overwhelming. I have never had so many emails in my inbox. The interfaith community has really stepped up."

She is asking the Catholic community to give what they can.

"We're called to welcome the stranger. Here's the opportunity."

Here’s how to help

If you would like to send a monetary donation to the Catholic Charities of Arkansas Refugee Resettlement program, click here and select refugee resettlement in the drop-down menu.