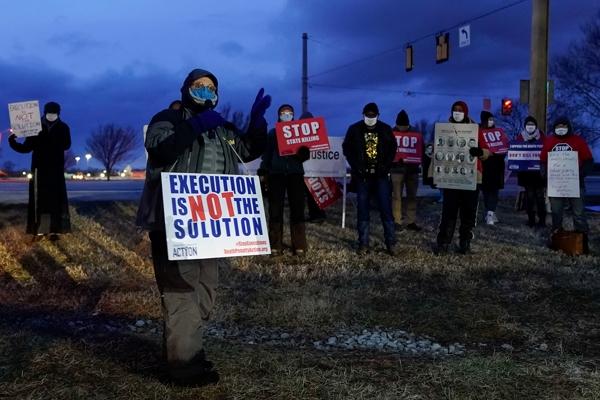 When a grave offense happens in the world, society cries out for justice. But justice is often confused with revenge, an “eye-for-an-eye” mentality, leaving out the opportunity for conversion of heart or systematic changes, explained diocesan respect life director Catherine Phillips.

The Catholic Church teaches that abolishing the death penalty and respecting the human dignity of an inmate, which can be anything from prisoner rights to restorative justice and reahiblitation, are part of a consistent ethic of life.

“Murder is horrific. Rape, horrific. These crimes against humanity hurt and shock us and what we say is it cries out for justice. But what does justice really look like? Justice is God's justice,” Phillips said, particularly for people who struggle with the death penalty as a pro-life issue. “And if we pray for justice, let's think about the justice we pray for for ourselves. What do we want for ourselves at the end of life? ‘Be merciful to me, a sinner.’ God's justice is his mercy. And what we want for ourselves at our depth is for God to have mercy on us. And so if we cry for justice, is that what we're really crying for for someone else? Are we crying for God to have mercy on their soul? That's hard.”

“Sometimes most people have just taken a wrong turn, but, still, they deserve the dignity of others, of all people. They should receive as much dignity as anyone else in the eyes of God.” - Sharon Robinson, a minister to prisoners for 11 years

According to the Death Penalty Information Center, a Washington, D.C., based nonprofit, 27 states allow the death penalty, including Arkansas. In 2017, the state killed four inmates during Easter week after 12 years of no executions.

The promotion of human dignity of every inmate is also of Catholic concern. Life imprisonment without parole and solitary confinement have been criticized by Pope Francis, who said in 2019, “If you close hope in a cell, there is no future for society,” instead advocating for ways inmates can reintegrate into society.

The need for programs like restorative justice, which allows the offender, victim or victim’s family to engage in dialogue with the goal to repair some of the harm caused by the crime, can be life changing. Father Phillip Reaves, director of the diocese’s prison ministry, said restorative justice recognizes the value in all people.

“It tries to give all involved a voice in the matters,” he said. “(Restorative justice) tries to meet the needs of all involved and repair harm that was done. Thus, it would involve victim assistance; change cultural defects that lead to crime; give all involved in sentencing offenders; assistance for families of inmates; and restitution to name a few.”

Victim’s assistance programs can also help support families who have experienced the unthinkable.

“We want to look deeper, we want to look at the family that is suffering this traumatic loss and say, ‘How can we help you?’ You want to confront this person who did this horrible thing, so let’s provide those opportunities, let’s facilitate those opportunities,” Phillips said. “But not where you’re yelling, ‘Crucify him, crucify him,’ but where you’re saying, ‘I want you to understand this beautiful life that you took.’”

What can I do?

Sharon Robinson, along with her husband, David, who died in June, have been involved in prison ministry for about 11 years in Jackson County. A parishioner at St. Cecilia Church in Newport, Robinson has visited incarcerated women, written to them and shared religious materials regularly.

“When you go there, they are so appreciative, so open, so hungry and some really relay that through your interactions through them and that kind of gives you a ray of sunshine into that area,” she said.

For lay Catholics that might not be sure how to get involved or what to do in regard to prison ministry, Robinson said first is to understand that everyone behind the walls of a prison are “children of God.”

“Sometimes most people have just taken a wrong turn, but, still, they deserve the dignity of others, of all people,” Robinson said. “They should receive as much dignity as anyone else in the eyes of God.”

Phillips said Catholic businesses and rent house owners can assist in other ways, like employing or housing a formerly incarcerated individual.

“Having awareness and a softened heart, isn't that what we're all trying to do? We're trying to amend our lives to change ourselves and be more of who God calls us to be, to live the Gospel,” Phillips said. “So when a person does something, and they have done time in prison, if they come out do we allow them the opportunity to go on with their lives, to amend their lives, to change and live the Gospel? Or do we lock them into their past sins? Do we create structures and stumbling blocks that make it harder for them?”

For more information on how to get involved in prison ministry, contact the Prison Ministry Office, which oversees prison ministry volunteers throughout the state, by calling (501) 664-0340 or visiting dolr.org/catholic-charities/prison-ministry.