New ASU leadership not afraid to show their Catholic faith 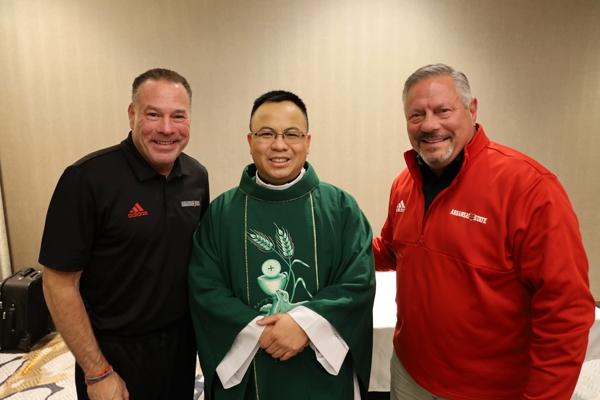 The sky was already as black as Arkansas State University’s helmets by the time head coach Butch Jones strode into the hotel conference room. It had been a long day, the latest in a series of long days that mark the life of a college football coach in his first year with a school.

Conference rooms were blocked off for various ASU team meetings up and down the hotel hallway outside. “Offense” read one sign; “defense” outside another; “training” at a third. All day, Jones had been invested in each of the players, coaches and staff inside every one of the rooms. He knows no other way after decades in coaching, 13 as head man at Central Michigan, Cincinnati, Tennessee and now ASU.

This last room is no exception. While tiny compared to the others, set with 20 or so chairs, it’s essential for Jones and, if you ask him, necessary for the team as well. Over the next 30 minutes, he and a handful of assistants and guests attended a humble Mass, a new fixture of gameday eve operations.

“I think everyone looks forward to this,” Jones said. “It’s kind of a moment in a time where we’re so busy and caught up in everything that goes into (game preparation). To be able to have some time just to kind of sit back and reminisce and have some quiet time like this is very beneficial.”

“Wherever I’ve been, I’ve built a community where we communicate, we work toward a common focus and a common goal, and our faith in each other and our personal faith are very important to us.”

Quiet time is something in short supply for most Division I college coaches, especially one like Jones, who has been affiliated with some of the top programs in the nation. In addition to his head coaching roles, he’s also done various assistant and coordinator gigs with Division III Wilkes University, Division II Ferris State, his alma mater; and Division I college programs in West Virginia, Central Michigan, Rutgers and Alabama.

At every stop in his career, the Michigan native followed his faith, not the other way around. So, when he landed in Jonesboro, there was no question that Mass was to be part of the preparation before every game, both home and away.

“To be able to have that, it’s something that we’ve been very fortunate and blessed to do everywhere we’ve been,” Jones said. “It’s just a time to come and give thanks and give respect and come together as one.”

Jones didn’t have any trouble selling his boss, Vice Chancellor for Intercollegiate Athletics Tom Bowen on the plan. Had Jones not come up with the idea, Bowen may have conceived of it himself. A former seminarian with the Holy Cross Fathers who took the ASU job this spring, Bowen earned a bachelor’s degree in theology and sociology from the University of Notre Dame in 1983. He said he considers faith, in all its forms, an integral part of any successful program.

“Wherever I’ve been, I’ve built a community where we communicate, we work toward a common focus and a common goal, and our faith in each other and our personal faith are very important to us,” Bowen said. “I make sure that I provide the ability to have all kinds of services for my student-athletes and my coaches. We’re Catholic, Presbyterian, Methodist, Jewish, whatever it needs to be; I’ve created a spiritual element in every athletic department I’ve been in.”

True to his word, a nondenominational service was offered across the hall from where Father Tuyen Do, pastor of St. John Newman University Parish on the ASU campus, celebrated Mass. Jones and Bowen, a Colorado native, sat reverently in the back row as prayers were offered for good effort, clean play and no injuries the following day. All of which was nearly word for word what the two men are seeking to build as the bedrock culture of the program.

“I’ve talked about my faith wherever I’ve been, and everybody knows my background,” Bowen said, noting the challenges of demonstrating faith in a public university. “I will tell you I’m a firm believer in divine timing and divine providence. I believe my Blessed Mother looks after me and looks after my family.”

“I’m also a big believer in my student-athletes, that they are their brother’s keeper, they are their sister’s keeper. We talk a lot about family and how everywhere I’ve been, I’ve been able to talk about faith without specifically teaching the Catholic Church, as much as talking about the examples we live in our faith. For me, it’s been probably more challenging but sometimes more rewarding.”

The Red Wolves have a long road to walk, both on the field (they finished the year 2-10 being outscored by opponents 463-303) and in embracing worship. The Nov. 26 Mass was joined by fewer than 10 people, so small Father Do preached and prayed, clearly heard, without a microphone. A mustard-seed showing to be sure, but one destined to grow.