Father Malapolu has made a habit of joining CTK students in play at recess, P.E. classes 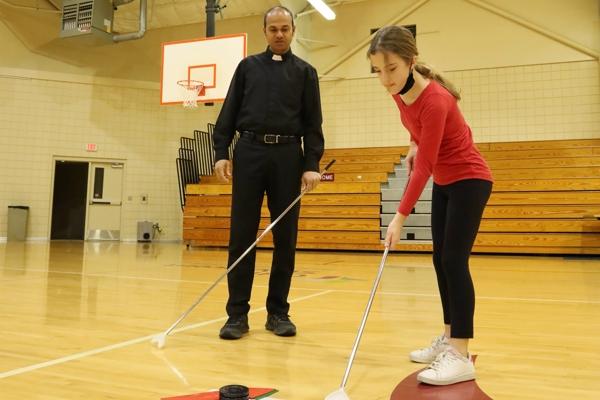 Father Bhaskar Malapolu stands in the middle of a stream of sixth graders pouring into the gym on both sides. It's the first period, and as the associate pastor of Christ the King Church in Little Rock greets them all, they reply in kind before quickly breaking off into their own little twos and threes. They’re used to the sight of him — it’s a Catholic school, after all — but to the bystander, this particular class period is a unique interaction.

The 41-year-old priest isn’t here to celebrate Mass, preach forgiveness or deliver a lesson on the Gospel of Luke. He’s not even here to promote vocations, although, by his presence, some may very well hear that call one day.

“Like anybody else, I love kids,” he said. “I play with all the grades, from pre-K to eighth grade, based on my schedule regarding Mass and hospital calls. Even if I don’t know what they are playing, I just join them and run with them because my intention is to be with them.”

“Like anybody else, I love kids. I play with all the grades, from pre-K to eighth grade, based on my schedule regarding Mass and hospital calls. Even if I don’t know what they are playing, I just join them and run with them because my intention is to be with them.”

Ever since arriving at Little Rock’s largest parish, Father Malapolu has made a habit of dropping in on recess and Coach Courtney Cancienne’s P.E. classes to join in the day’s activities with students.

“He just came in one day,” said Coach C. as she is known. “He’d go out to play soccer and then slowly started playing with the kids for outside recess. Then he came into the gym, and I don’t really know how it started, but we were talking and he said, ‘Hey, what are you guys playing?’ I would introduce what we were playing, and he just wanted to play.”

“The kids, when he walks into the gym, they love him. They just love his presence. They love for him to play. They want to be his partner. It’s so great.”

“Priests have always been like a little nerve-wracking, but when Father came to our P.E. classes and played with us, it’s more fun,” said sixth-grader Olivia Lusk. “I’ve seen him play soccer, and he’s always having fun, smiling, scoring goals. He’s super fun to play with.”

Most of the games are foreign to the native of Nellore, India, from pickleball to lacrosse to cornhole. That’s led to some humorous moments, like the wrong-way touchdown he scored during football. But as the students have learned, you underestimate Father Malapolu at your own risk.

“One time, we played cornhole against my eighth graders, and we had a tournament,” Cancienne said. “Father and I beat all the eighth-grade boys, and they were so upset. He was so good at it. It was just such a fun time.”

Father Malapolu, who is entering his 10th year of ordained life, came to Arkansas in 2019. He said while organized sports were few and far between as a child, he was always an active youth.

“I was not an athlete, but I loved games and sports,” he said. “I was the kind of child who was out all the time, and I used to go home only to eat. The rest of the time, I spent with friends or playing cricket and other games that children used to play in the villages.”

From the earliest days of his priesthood, Father Malapolu found joy in connecting with children. He started his recess drop-ins while in India and continued when he arrived in Arkansas, first at Sacred Heart Church in Morrilton and for the past two years at Christ the King. He said besides just getting to play, he finds his faith renewed each time he bumps a volleyball or swings a jump rope.

“More than my love for the kids and my interest in sports, the children’s love for the priest helped me to get closer to them,” he said. “They are so innocent in how they see priests. I noticed in them some kind of joy or happiness when they see me.”

“I don’t know how to say it, but something beautiful happens, like they believe that Christ is with them, or they feel the presence of God. Every time I go to the playground or gym or classroom or cafeteria, I want them to feel the presence of Christ and want to bring Christ to them.”

“When he comes in and plays, he connects with the kids on another different level,” Cancienne said. “He teaches them, too. I’ll ask him in front of the kids, ‘What did you play when you were growing up,’ or they’ll ask him questions about his sports and things like that. They are just learning so much from him, and you can see how much he loves getting to know them.”

That connection will take on a whole new dimension this semester. Wanting to share an element of Father Malapolu’s culture, Cancienne is putting him to work teaching the students his favorite sport.

“I would like to teach children how to play cricket. I bought bats, balls and wickets. Maybe in the coming days I will teach them,” he said. “I really enjoy playing with them, and I am having a wonderful time in my life. I feel like I am reliving my childhood.”