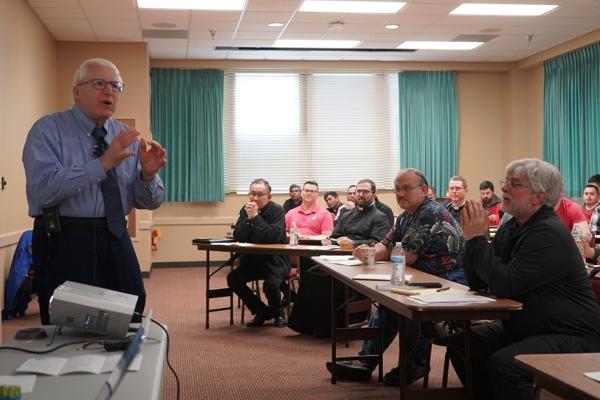 Aprille Hanson Spivey
John Roberto, founder and team leader of Lifelong Faith Associates based in Cheshire, Conn., spoke to the diocese's priests about faith formation in the parishes, March 22, at Fitzgerald Hall at the St. John Center in Little Rock as part of the spring continuing education workshop.

Aprille Hanson Spivey
John Roberto, founder and team leader of Lifelong Faith Associates based in Cheshire, Conn., spoke to the diocese's priests about faith formation in the parishes, March 22, at Fitzgerald Hall at the St. John Center in Little Rock as part of the spring continuing education workshop.

Education, spiritual formation and fraternal bonding should not end when a priest graduates from seminary and is ordained. It’s why the Office of Continuing Education of the Clergy has three-day workshops for priests twice a year, as well as an annual retreat and day of recollection during Holy Week. Priests can also seek other types of degrees and certification, anything from spiritual direction to canon law to exorcism training. There is an expectation that priests attend continuing education every year, Bishop Anthony B. Taylor told Arkansas Catholic.

“To grow in their own ministerial capacities, and to do it with their brother priests and deacons,” Bishop Taylor said as to why priests should make every effort to attend continuing education. “To grow personally in their own relationship with the Lord and then their own intellectual development, grow in their ministry and especially come to new perspectives on how to approach ministerial situations. Especially regarding things that may not have been issues when they were in seminary and are now current issues.”

Continuing education for priests has long been a priority for both the Vatican and the United States Conference of Catholic Bishops. St. John Paul II’s apostolic exhortation, “I Will Give You Shepherds (Pastores Dabo Vobis),” stated: “Priests are not there to serve themselves, but the people of God. So, ongoing formation, in ensuring the human, spiritual, intellectual and pastoral maturity of priests, is doing good to the people of God itself.”

Father Erik Pohlmeier, who became director of the office in 2019, said professional development for priests is vital.

“To grow in their own ministerial capacities, and to do it with their brother priests and deacons,” Bishop Taylor said as to why priests should make every effort to attend continuing education. “To grow personally in their own relationship with the Lord and then their own intellectual development, grow in their ministry and especially come to new perspectives on how to approach ministerial situations. Especially regarding things that may not have been issues when they were in seminary and are now current issues.”

“From a purely educational aspect, many professional organizations have that approach,” he said. “But a stronger motivator for many, maybe a greater motivator is the fraternal aspect of it because our diocese is so spread out. Whenever priests get a chance to all come together, I think the motivating force for a lot of the priests coming is to get together with the other priests they’re otherwise separated from.”

The diocese holds continuing education for clergy Tuesday-Thursday in the spring and fall. The most recent March 22-24 included prayer, meals and six talks, usually pertaining to one topic.

In March, John Roberto, founder and team leader of Lifelong Faith Associates based in Cheshire, Conn., spoke about faith formation in the parishes. Topics are up to the director, though they often receive input from the bishop, should there be a timely topic, like the upcoming Eucharistic Renewal, or from priests who can suggest topics.

“General topics priests like is anything on Scripture because we got Scripture classes in the seminary, and because priests are preaching, we’re still interested in that,” Father Pohlmeier said, adding that liturgical issues are also popular.

Msgr. David LeSieur, pastor of St. Vincent de Paul Church in Rogers, was director of the office for almost 30 years and led both the workshops, the annual priest’s retreat at Subiaco Abbey and the Day of Recollection. The office is now split, with Msgr. Scott Friend, pastor of Blessed Sacrament Church in Jonesboro, coordinating retreats.

“We had a priest talk about the occult, not to perform exorcisms, but to know about it. We’ve had priests talk to us about angels, the administration of the various sacraments, like anointing of the sick. It’s impactful. It gives me, as any priest, it gives me more information of what we could be doing or should be doing. Sometimes it’s a wake-up call or affirms what the priest is doing.”

The cost of the speaker comes from the office’s budget, and parishes pay $175 for their pastor and associate pastors, if any, to attend, which does not include a room and meals. Not all priests attend the sessions: Eighty-seven attended in fall 2020, 75 in spring 2021, 69 in fall 2021 and 69 registered for the recent March session.

“I would say make the time. If you have a secretary or staff, but feel like you can’t get away. We know these dates well in advance, you make arrangements to say, ‘I’m going to be gone these dates,’” Msgr. LeSieur said.

Several priests in the diocese make attending continuing education a priority while also pursuing other educational or spiritual training. Despite Father Mauricio Carrasco’s busy schedule pastoring three parishes — St. John Church in Russellville, St. Augustine in Dardanelle and St. Andrew in Danville — he has attended continuing education workshops since his ordination in 2012.

“I feel like I’m spiritually feeding people every weekend. This is a chance where I can go, where I can sit down and just learn. That’s very recreative for me, it’s rejuvenating. It also fills me back with zeal for the Gospel,” he said.

Father Carrasco said the topics he loves to touch on are relevant pastoral challenges, and even if there are no clear answers, he said it gives him the language, resources and knowledge to address topics intelligently.

“If we’re going to be one diocese under our shepherd, Bishop Taylor is the shepherd, it’s a good idea to be formed and talk to one another, for the sake of unity,” Father Carrasco said.

For some priests, training or education extends beyond workshops. Bishop Taylor said the diocese pays for priests to get additional education or spiritual training.

“Usually, it’s in my initiative,” Bishop Taylor said, though priests can also come to him if they feel called to a field of study. “So I consider what the needs of the diocese are, whether it would be a good fit for this particular priest. Someone that I think has special gifts for spiritual direction or someone that’s got a mind for canon law, or passion for something.”

“So it was truly an assignment for me, much like being assigned to a particular parish, rather than something I elected to do …. In that way, our higher studies are a little different than a layperson going off to pursue a master’s or doctorate or something. The purpose is to further our ministry or better serve the Church, rather than personal enrichment,” Father Hart said, adding he had an interest in canon law.

After studying with Catholic University of America in Washington, D.C., he received his Licentiate of Canon Law (in Latin, Juris Canonici Licentiata or “JCL”) in July 2018. Father Hart is the adjutant judicial vicar and judge for the Diocese of Little Rock Tribunal, working on annulment cases.

“It’s made me a better pastor. A lot of people think of canon law as something that’s kind of rigid or based upon rules or regulations, but really the heart of canon law is pastorally reaching out and helping God’s people,” Father Hart said.

In January, Father William Burmester, pastor of St. Edward Church in Texarkana, Sacred Heart in Foreman and St. Elizabeth Ann Seton in Ashdown, began pursuing his spiritual direction certification from the Cenacle of Our Lady of Divine Providence School of Spiritual Direction in Clearwater, Fla. Fathers Daniel Velasco, Joseph Archibong, Tuyen Do and Patrick Friend will also begin working toward certification this year, at the request of Bishop Taylor.

“I wouldn’t assign him to something if I didn’t think they’d have an interest in it. I’ll ask guys, ‘What do you have energy around?’” Bishop Taylor said, while also looking at the diocese’s needs and who would best fit those needs.

Spiritual director certification is a three-year process that includes two-week annual sessions at the school and a 30-day silent retreat or 19th annotation, essentially an Ignatian Retreat in Daily Life, which is nine months long and requires meeting with a spiritual director each week.

Father Burmester said given his schedule as a pastor, he’s opting for the 19th annotation.

“I enjoy the psychology of things,” which was his major in college before joining the seminary, he said. “I know spiritual direction will help me see God more clearly. Looking at them (parishioners) as a pastor through many lenses, I’ve always wanted the spiritual lens to be greater to see their life through.”

Father Burmester said any pursuits of education or extra training helps him and other priests in their ministry.

“Sometimes we feel like we know everything. It helps you learn there’s so much more we need to know,” he said.