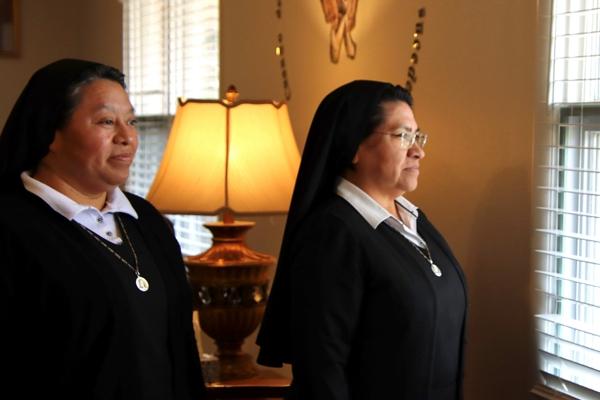 Even before the pandemic, Father John Connell, pastor of St. Raphael Church in Springdale, took some proactive steps to address an alarming issue he saw in the parish.

In February 2016, two young girls, ages 12 and 14, committed suicide. That same month, two other parishes in northwest Arkansas also experienced tragedies through suicide. Father Connell decided to seek help through a grant with Catholic Extension. The grant was set up to hire three Missionaries of Charity of Mary Immaculate sisters with a five-year commitment to serve with “human development services” at St. Raphael.

When the grant was approved, three sisters arrived in the fall 2019 ready to focus on helping young Latina women, ages 12-25, especially as it related to violence and trafficking prevention. Less than a year after their arrival, their ministry changed course as the pandemic became a new reality.

“Although human trafficking was indeed part of what Catholic Extension envisioned, it was not the only part,” Father Connell said. “The sisters are doing what they have been called to do and meeting the girls and their families where they are. As the sisters arrived in 2019, I could not have predicted the pandemic and how it also changed their ministry.”

For the past two years, Father Connell said the sisters have been speaking with more young women, but he also attributes the rise in visits to the realization the sisters are available and willing to help.

As explained in the grant application, Father Connell said in his experience of counseling young women and girls at St. Raphael Church the past 10 years, is that by the age of 15, it is too late to reach them. He said many teens and young women have already been exposed to gang violence, sex trafficking, pornography, alcohol and drugs. Some of them have tried to commit suicide.

“By age 15, a young girl has already been exposed to the evils of this world,” Father Connell said. “At St. Raphael, there are 1,262 young girls ages 12-14, sixth-eighth grade. To leave them out of the focus or scope of the ministry is saying that the sisters will be here working on containment rather than prevention. I would like to think they could do both. These young girls need them.”

St. Raphael Church, the largest parish in the diocese, serves about 3,000 Latina women, ages 12-25. The focus of the sisters’ ministry is prevention and working together with mental health services and health professionals to address the needs of these young women. Additionally, one of their goals is to begin to form leaders, so when the sisters leave at the end of year five in 2024, they will have built a team to continue the ministry.

“In the past couple of years, we have seen more than 1,000 parishioners, with the numbers skyrocketing during the pandemic. Now the ministry includes not only face-to-face meetings, but phone teleconference calls, Zoom and workshops,” said Sister Deyanira Gonzalez, the local superior.

“We have encountered more girls and young women having suicidal thoughts, and for some, it is due to sexual abuse or parents carrying around some past sexual, verbal or physical abuse, trauma or depression,” said Sister Deyanira, speaking through translator Father Omar Galván, associate pastor of St. Raphael. “So much of this abuse is systematic.”

Father Galván said Sisters Deyanira, Minerva Morales and Sandra Estrada worked in psychiatric units and know if an issue is outside of their reach and need more help, by referring them to professionals.

“Two of them are teachers, and one is a nurse by training,” he said.

When the sisters get a call from parents, a meeting is scheduled with the parents to see what needs to be addressed, then they meet with the adolescent and often find other issues concerning to the teen. And although they work mainly in the parish, they emphasize their ministry is open to anyone. However, one criterion that must be met is the girl has to want to be there and cannot be forced.

“Many of these teens have low self-esteem. The parents are working; the students have lots of time by themselves, so there is a sense of not wanting to live because they are always by themselves,” Sister Deyanira said.

The mental health of young people is part of a nationwide discussion. Issues that existed before the pandemic have been exacerbated since the pandemic began. Young adults have dealt with uncertainty in many aspects of their lives, as well as COVID, disruption of school, lockdowns and illness or death of close family members.

The toll on the mental health of 12 to17-year-old boys and girls has also risen sharply in the past two years, enough to cause professionals to make an urgent plea for policy changes.

Between March and October 2020, the Centers for Disease Control and Prevention found that emergency department visits for mental health emergencies were up 31 percent for children ages 12-17. Emergency room visits for suspected suicide attempts increased by 51 percent in girls of the same age group in early 2021 compared to 2019.

“We are caring for young people with soaring rates of depression, anxiety, trauma, loneliness and suicidality that will have lasting impacts on their families, their communities and all of our futures,” said AACAP President Dr. Gabrielle A. Carlson in the December 2021 Journal of Pediatric News.

At St. Raphael’s, the three sisters suggest young people be open to dialogue with parents. They also recommend seeking help to address the problems as a family, not being afraid to address the wounds that families have and not letting the wounds build up.

Sister Minerva said it has been helpful for those with those overwhelming feelings of depression to talk to someone.

“Start believing in something,” she said. “Individuals need to place their trust in faith to help them move on.

Most of the people that come here have a sense that they have been distancing themselves from God, but they find, in order to get closer to God, they have to address their wounds.”

In March, the sisters offered workshops at St. Raphael and are scheduled to offer another workshop for families at 9 a.m. June 11.

At the University of Arkansas, Father Jason Sharbaugh, pastor of St. Thomas Aquinas University Parish in Fayetteville, said he feels the problem is multi-layered and not only a problem of the pandemic.

“Stress levels of students has increased, and social media, indirectly, I feel plays an important role in just the overall mental health of young women as there is a tendency to brood over something that is posted,” Father Sharbaugh said.

According to Dr. Tim Cavell, a professor in the Department of Psychological Sciences at the University of Arkansas, a demand for student services has increased.

"One hundred percent, without a doubt," Cavell said about the increase. "The numbers are unprecedented and it's not just young adults."

Cavell said most mental health care providers in the U.S. are slammed with individuals waiting to be seen, and many are no longer taking new patients. He said, however, there is a silver lining to the pandemic.

"The stigma surrounding seeking mental health care has been significantly lessened if not permanently set aside," he said.

“I think it's fair to say we have an urgent situation when it comes to the mental health needs of kids and teens," said Cavell, who is also a clinical psychologist at the PCA Center for Children and Adolescents.

Currently, the Springdale parish is the only church in the diocese working with Catholic Extension Services to address the mental health of young women.