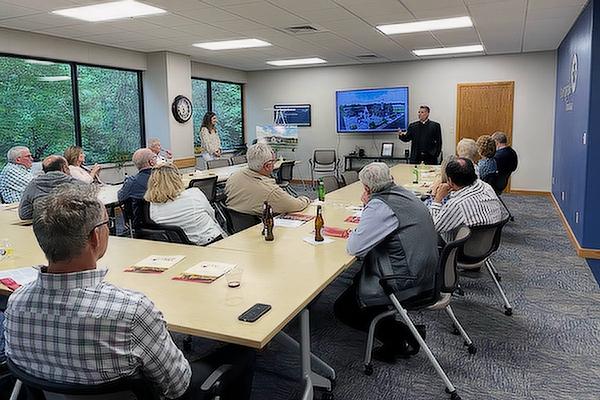 As classes resume at the University of Arkansas, St. Thomas Aquinas University Parish will be rolling out a new ministry program to welcome back students.

FOCUS, the Fellowship of Catholic University Students, was approved by the diocese in May to launch at the University of Arkansas this fall. The Catholic collegiate outreach ministry is flourishing on more than 160 college campuses nationwide and abroad. With an emphasis on discipleship, empowerment and mentorship, the lay apostolate dispatches recent college graduates to spend time meeting with college students daily. FOCUS missionaries, through both spiritual and social avenues, share the hope of the Gospel and provide students with the tools they need to grow in their faith while in college and learning to lead others to do the same.

Every Southeastern Conference (SEC) college campus has benefited from FOCUS missionaries, and the University of Arkansas now joins the ranks. The program has had a high success rate in keeping students involved in their Catholic student centers with Bible studies, meals and social events, as well as bringing students to the pews to worship on Sundays.

The first FOCUS missionary, John Paul Hernandez, arrived in July. Hernandez and his wife of two years, Evelyn, are looking forward to living in Fayetteville and working with campus minister Adam Koehler and Deacon Paul Cronan, faculty advisor and UA professor for more than 40 years.

“When FOCUS comes onto a campus, we typically see the numbers double for student participation in Bible studies.”

A 2020 graduate of Texas A&M, Hernandez will serve as the missionaries’ team leader. Two more missionaries, Ellie Salcedo and Sarah Leger, graduates of the University of Alabama and Oklahoma State University, respectively, arrived in early August. A fourth missionary will arrive in January to join the team in living out an authentic Catholic lifestyle on campus.

Hernandez said the ministry is crucial when a recent Pew poll indicated that 80 percent of those raised Catholic have left the Church and are unaffiliated with any religion by the age of 23.

“FOCUS addressed this issue by sending out nearly 800 missionaries to 205 locations last year and has helped inspire over 1,000 individuals to pursue vocations since 1998,” he said. “When FOCUS comes onto a campus, we typically see the numbers double for student participation in Bible studies.”

The timing to welcome FOCUS to the University of Arkansas couldn’t be more perfect, according to pastor Father Jason Sharbaugh. Plans are in the works for a new church to replace the one built in 1959.

“This has all happened in God’s time,” he said. “With FOCUS missionaries on campus and our capital campaign in full swing, this has coalesced with how we will connect with the community as we look to the future of creating a dynamic home for a new church and Catholic student center.”

Alumni and new students recognize that St. Thomas has desperately needed renovation as the church, rectory, and student center appear frozen in time since the church was built. Repairs over the years have not rectified some of the issues the aging building has presented, and updates to help the space meet the changing needs of an ever-growing student body have not been feasible.

Launched last year, a capital campaign has been underway to raise money for the demolition and rebuilding of a new church and student center.

“We have been working toward the original building goal of roughly $10 million and have raised a little more than $7 million, which includes a $1.5 million challenge grant,” Father Sharbaugh said. “In order to receive the grant, St. Thomas must raise an additional $3.5 million by April of 2023.”

St. Thomas’ prime location on the corner of North Leverett and Douglas Street provides easy access for students on campus and will remain its home. According to an 18-month building project overview, demolition will begin in spring 2023, with hopes to open the student center in  August  2024. Plans include a new 550-seat church, more than doubling its current seating. A larger meeting hall, complete with a kitchen, study and meeting rooms for students, large classrooms for religious education, an adoration chapel and green space for outdoor activities would support the students’ and faculty’s current and long-term needs.

In the meantime, Father Sharbaugh said he feels confident the arrival of FOCUS ministers allows for more campus outreach as Mass and other ministry activities will begin to operate out of borrowed spaces, like the Student Union, once the project starts.

“FOCUS will allow us to bring more awareness to students and the community,” said Sarah Du Preez, director of stewardship and development at St. Thomas Aquinas University Parish.

Given the growth of the university in recent years, Du Preez feels Catholic outreach will increase exponentially with the help of FOCUS.

“We have over 1,000 Catholic students on campus, and we know there are more. The extra manpower and training of FOCUS will help us increase student participation,” she said.

Support for the building project from around the diocese and alumni has been overwhelmingly positive, according to Du Preez and Father Sharbaugh.

The University of Arkansas is the first college campus in the state to welcome FOCUS ministers. With the plans for a new church and student center underway, Father Sharbaugh anticipates the project will set the standard for Catholic campus ministries across the state.

“We have to get the entire life of ministry moving ahead to be a great Catholic ministry in the SEC,” Father Sharbaugh said. “ We want to grow students’ faith life, retain them on campus and keep them in the state to grow our Catholic community and build a church that lasts for the next century.”