Pastoral Council chair an advocate for the Church in Arkansas, society's marginalized 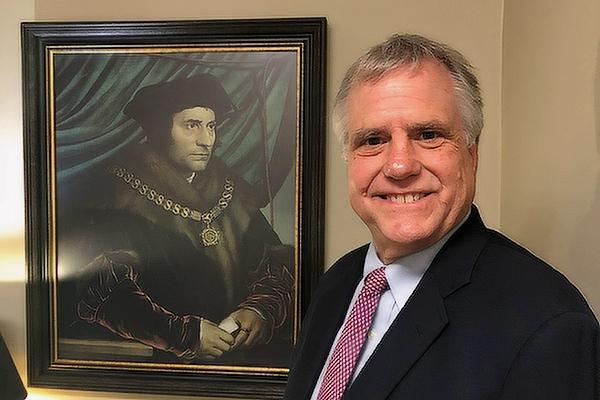 Chris Price
Diocesan Pastoral Council chairman Paul James, in his Little Rock law office Sept. 29, stands in front of a portrait of St. Thomas More, patron of lawyers, which was given to him by his father when he graduated from the University of Arkansas’ law school.

Chris Price
Diocesan Pastoral Council chairman Paul James, in his Little Rock law office Sept. 29, stands in front of a portrait of St. Thomas More, patron of lawyers, which was given to him by his father when he graduated from the University of Arkansas’ law school.

Parish: Our Lady of the Holy Souls

Why you want to know Paul: Paul James grew up in West Memphis, where his family were members of St. Michael Church. As a teen, he was president of St. Michael’s CYO and member of the parish council. He received his law degree in 1982 from the University of Arkansas at Fayetteville, and for nearly 40 years has practiced in Little Rock. He is a founding member of the St. Thomas More Society of Arkansas and has served as its president and on the board of directors. He is chairman of the Diocese of Little Rock’s Pastoral Council.

Weekly Mass and the small prayer groups we have at Holy Souls. We've had the same core group going on maybe six years. We meet on a near weekly basis and study the readings for the upcoming Mass and discuss some type of spiritual book that we've chosen that we feel is relevant to everyone.

What drew you do the legal profession?

My father's a doctor, my grandfather was a doctor, my brothers are doctors, but I had two uncles and aunts who were lawyers. I was just always better at history than I was chemistry. So, I gravitated to the law as opposed to medicine.

How would you describe your career?

It's been fulfilling. When I graduated from law school, I worked with two Catholic lawyers — former U.S. Attorney W.H. "Sonny" Dillahunty and Walter Skelton from Conway. I started my own firm in 1986, four years out of law school, and I've really enjoyed having the independence of having my own small law firm and representing individuals.

Can you talk about your interest in civil rights?

When I was working with Sonny Dillahunty, we had the opportunity to represent an individual that was wrongfully arrested, wrongfully accused. That was the first civil rights case I had, and we had a very good outcome. We've represented minorities that were paid less than the majorities. We've represented prisoners who were in a facility that entered into a consent decree, but they weren't complying with it. An individual was stabbed in the barracks that didn't have the appropriate guards that they had agreed to have. That was a big civil rights case — Smith v. Norris — and it was really rewarding. And then, we’ve had cases where people were pulled over for minor traffic offenses and strip searched and cases where mentally ill people weren’t treated constitutionally.

What drew you to the pastoral council?

Well, the bishop asked me to be part of it, and I thought it was a really good idea to get a consultative body for the for the bishop to bounce things off of and get a feel for what the needs of his flock were. He created a real geographic, ethnic and population-diverse mixture for him to get feedback from large parishes, small parishes, the Hispanic Church and Black Catholics to serve as a consultative body.

What drew you to serve as chair?

Once again, I was asked. To be honest, the chair just keeps the flow of the meetings going and making sure that we keep on the agenda and whatnot.

A lot of lawyers don’t like lawyer jokes, but I've got a good sense of humor, so I don't mind it. I have a story though about Abraham Lincoln, who famously said “Don't ever ask a question you don't already know the answer to.” He was representing a farmer who got into an altercation with his neighbor and was accused of biting the guy's ear off in the fight. There was a guy in a tree that witnessed it all. Lincoln was cross-examining the guy that witnessed it and asked how he was sure when he was 150 yards away from the altercation, 50 feet up in the tree full of leaves with the sun shining right in his eyes. Lincoln thought he had him and asked, ‘How can you tell this jury that my client did what you say he did?’ and he goes, ‘Well, because I saw him spit it out.”

SEE MORE PHOTOS related to this story at Arkansas Catholic's Zenfolio page, and order prints if you like. You also can browse other photos taken by Arkansas Catholic photographers.
Click for the A Catholic You Want to Know index

Diocese updates its code of conduct for staff, volunteers