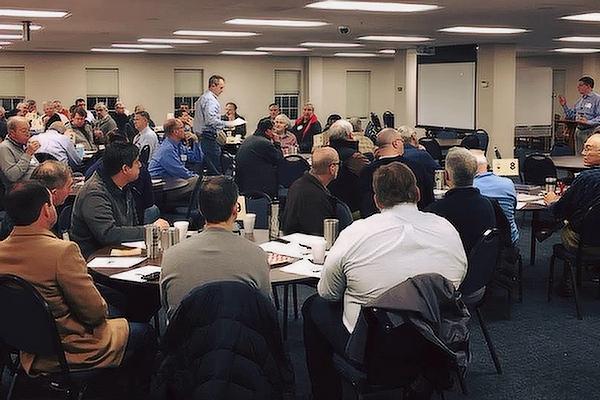 Courtesy Robby Cole
The Men of Faith prayer group at Christ the King in Little Rock, seen here on Friday, Oct. 14, has grown from a gathering at one table to as many as 80 men at their weekly meetings.

Courtesy Robby Cole
The Men of Faith prayer group at Christ the King in Little Rock, seen here on Friday, Oct. 14, has grown from a gathering at one table to as many as 80 men at their weekly meetings.

The members of Christ the King Church’s Men of Faith help produce the Arkansas Catholic Men's Conference at the church on the Saturday before every Super Bowl. Founded in 2010, the event features three to four presentations, reconciliation, adoration, meals and time to visit and network. The next conference is scheduled for Feb. 11. For more information, visit arcatholicmen.com.

It has become a generally accepted belief among Catholics that women  — in their roles as wives and mothers  —  are often the driving force behind family involvement in the Church, and parish participation by men is less than women.

But several churches across Arkansas are taking steps to offer men opportunities for greater development of their faith and involvement and participation in the life of the Church.

While many parishes in the Diocese of Little Rock have social and service organizations like men’s clubs, Knights of Columbus or Knights of Peter Claver, fewer offer men’s ministries dedicated to faith formation.

Jeff Hines, diocesan director of faith formation, said creating opportunities for men to develop their faith is a priority for his office and referenced Luke 5:10, “Jesus said to Simon, ‘Do not be afraid; from now on you will be catching men.’”

“Outside of Marriage Encounter, this has been the best thing for my soul and spirituality and my relationships with my wife, children, extended family and friends,” Cole said.

“A parish men's group can put this into action. It can be a way to take seriously Jesus' great commission to go and make disciples,” Hines said. “I think it's in our nature as men to be goal-oriented and process-minded. God knows this. He created us this way. Go with it. The goal is for men to be disciples and make disciples.”

A year ago, Father Stephen Hart, pastor of Our Lady of the Lake Church in Lake Village, Holy Cross Church in Crossett and Holy Spirit Church in Hamburg, started and has led a men’s ministry at Our Lady of the Lake. His reasoning was simple — parishes need to set aside time, space and resources to form mature Christian men.

“While it can be rewarding to be a part of a men's service group in a parish, it can also require a lot of time and energy,” Father Hart said. “Parishes need to offer their men an opportunity in faith formation where all they have to do is show up, and (we) give them something rather than asking them to give.”

“Each week, someone brings food for the group, and the parish provides coffee,” he said. “We have used the Formed app extensively, usually watching a small section on some series and then breaking into groups to discuss some questions. The men appreciate the simplicity.”

As a farming community, attendance at Our Lady of the Lake’s weekly men’s gatherings, held at 6 a.m. Fridays, depends on the time of year. Father Hart said during planting and harvest roughly 12 to 15 men can be counted on, but those numbers grow to as many as 22 men a week after the harvest, with more attending as word spreads.

Dr. Jim Wright has been a regular participant in Father Hart’s group since it started. As a convert, he said the teachings and discussions, especially those centered on the Mass and Eucharist, have deepened his understanding of the faith and his relationships.

“The Friday morning men's group has been instrumental in connecting with other parishioners (especially in) getting to know them on a deeper, more intimate level,” Wright said. “The group seems to be developing into a community with a brotherhood flare.”

Lawyer and lifelong Catholic Joe Mazzanti said he joined the group because opportunities to share the faith with like-minded individuals do not present themselves too often.

“I've come to realize that other men have the same cares and concerns that I do, especially when it comes to relationships with our wives, children, co-workers, neighbors, etc.,” he said. “It certainly helps for us men to open up about these things. This is not something that men naturally do.

“I relish this extra opportunity to get together with other parishioners and talk about things going on in their lives and letting them know what's going on in my life,” he said. “I feel that it brings us closer together as a parish and as friends. To be honest, I initially thought I would dread getting up so early on Fridays. (But now) I actually look forward to it.”

Like many activities over the past two years, the men’s Bible study at Blessed Sacrament in Jonesboro became a casualty of the COVID pandemic. Having missed the fellowship, parishioner Dean Massey worked with pastor Msgr. Scott Friend to re-start the group in March.

“Men can be kind of quiet a lot of times when it comes to their spiritual growth or spiritual shortcomings, even their thoughts in general,” Massey said. “But it seems like when we get in the right atmosphere, in the right spirit that things flow. There’re three or four guys in the group who when they speak, I lean forward to listen and always seem to learn quite a bit.”

The group, which draws around 12 men a week, meets every Thursday for dinner and a trivia session before taking on their spiritual work.

“We really want to engage our younger men, those 22-45. So many have family activities, but we’re constantly recruiting. I make calls from the church directory. If I see someone I don’t know at church, I introduce myself and make sure to invite them.”

For more than a decade at Christ the King Church in Little Rock, the Men of Faith prayer group has met every Friday at 6 a.m., said parishioner Robby Cole.

“Outside of Marriage Encounter, this has been the best thing for my soul and spirituality and my relationships with my wife, children, extended family and friends,” Cole said.

What started as a handful of men around one table has expanded to 60 to 80 participating weekly.

“We have guys from all over Little Rock — Holy Souls, IC, the Cathedral — who come every week,” he said. “We’ve created an environment where men can be open about the things they are facing, and usually someone has experienced something similar and can offer advice. It’s developed into a place where men can lean on and learn from one another, and we’re able to grow closer as a result.”

The members of Christ the King Church’s Men of Faith help produce the Arkansas Catholic Men's Conference at the church on the Saturday before every Super Bowl. Founded in 2010, the event features three to four presentations, reconciliation, adoration, meals and time to visit and network. The next conference is scheduled for Feb. 11. For more information, visit arcatholicmen.com.