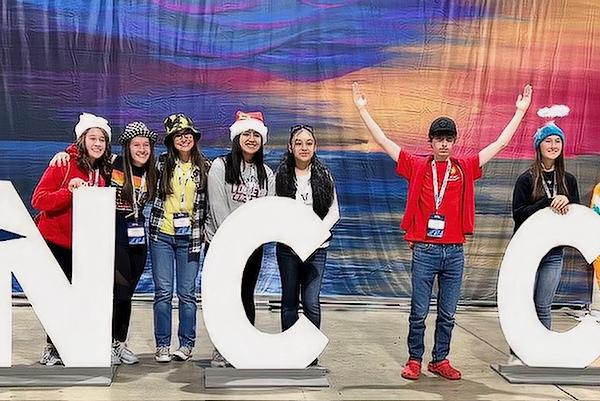 Courtesy Paula Price
Seven members of the youth group at St. Jude the Apostle Church in Jacksonville and 10 adult chaperones attended the National Catholic Youth Conference in Long Beach, Calif., Nov. 10-12. They described the connections made with youth groups from around the country as “beautiful.”

Courtesy Paula Price
Seven members of the youth group at St. Jude the Apostle Church in Jacksonville and 10 adult chaperones attended the National Catholic Youth Conference in Long Beach, Calif., Nov. 10-12. They described the connections made with youth groups from around the country as “beautiful.”

It took two years to raise the money to fund their excursion to the West Coast, but the seven members of the St. Jude the Apostle Church youth group in Jacksonville who attended the National Catholic Youth Conference in Long Beach, Calif., Nov. 10-12 said the trip was well worth it.

St Jude’s youth group raised about $25,000 from its annual yard sale and other fundraisers to cover the trip for themselves and 10 adult chaperones, said Paula Price, parish’s director of religious education and youth minister.

Coming from a state where the Catholic population is just 4 percent, all said being around the other 2,600 Catholic teenagers made a lasting impression.

“It's really wonderful to be able to see so many other teenagers just like you,” said Liliana Clark, 15, a sophomore at Cabot High School. “At times it feels like there's not many other people who are Catholic like us. That can make you feel kind of alone, but when you're with so many other people just like you, it's just amazing. I didn't know there were so many other kids who are so passionate about their faith. Getting to see tons of different youth ministries from almost every single state, it really felt like we were all connected there, and it was so beautiful.”

"I didn't know there were so many other kids who are so passionate about their faith. Getting to see tons of different youth ministries from almost every single state, it really felt like we were all connected there, and it was so beautiful.”

The NCYC’s theme was “Walking on Water,” inspired by the story of Jesus calling Peter to come out onto the water despite being in the eye of a storm (Matthew 14:29). Organizers said teens have experienced a feeling of sinking causing a weakening of faith throughout the past few years, and this conference was an invitation to step out in faith and trust our Lord.

Grace Wagner, 15, a sophomore at Vilonia High School, said the trip provided a break from the everyday stresses teens face and allowed them time to focus on their prayer life and listen to the advice given in presentations and break-out sessions.

“They talked about things that they experienced when they were our age, the stress that they went through and the different pressures you can feel by other people,” Wagner said. “Then they went over how to navigate that to be the best person you can be and how to utilize your prayer life to help you do that. They gave a lot of good advice on how to rely on God and to put all of your daily stresses at his feet and relax a little bit.”

Abigail Hann, 15, a sophomore at Cabot High School, said the trip was “life-changing.”

“It really showed a bunch of different perspectives on the faith and answered a lot of the questions that young teens can have with the faith. Everybody goes through problems and struggles, and it's OK,” she said. “I brought back that you need to maintain a prayer life and a relationship with God if you want to stay happy, because if you don't, then your life is going to be empty.”

In addition to serving the Little Rock Air Force Base, Price said the parish has students from several high schools, including Vilonia, Beebe, Searcy, Jacksonville, Cabot and Sherwood, but they put those rivalries aside and exhibit their faith in a way they can’t at their public schools.

Being able to attend national events helps not only to open their eyes to the Catholic world outside of Arkansas but also to draw them closer as a faith community.

“This is a diverse parish, and it was phenomenal to see them all come together, be able to share in their faith and to talk about the issues that they have to deal with every day,” Price said. “I am really proud of them. They all enjoyed each other's company. And I think the adults got a lot out of it as well. I think it opened eyes in some of the adults as well. Which is wonderful.”

Seminarian Sam Stengel, who has been assigned to St. Jude as part of his priestly formation, attended NCYC with the youth group.

“Being able to go with the kids, to see the faith of young Catholics of the whole country, but, especially, spending time with young people of this parish was a real privilege,” Stengel said. “It was really inspiring for me to see them get excited about their faith. I feel like people get really down like talking about how we're living in dark times as a Church, but I see these young people, and it really gives me a lot of hope going forward and knowing that by the time I'm a priest, these will be my parishioners helping me out in the parish and I look forward to being able to work with them and being inspired by them as well.”