A century of faith in news 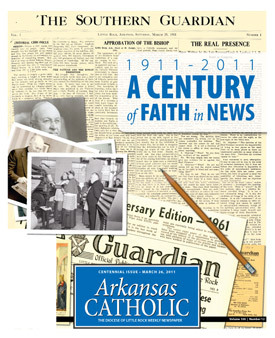 The following stories appeared in special section March 26, 2011 celebrating the centennial of Arkansas Catholic and its predecessors, The Southern Guardian and The Guardian. The first issue of the diocesan newspaper was published March 25, 1911.

Bishop sees need for Catholic press for the people of Arkansas
Bishop John Baptist Morris, third bishop of the Diocese of Little Rock, founded a diocesan newspaper to communicate more widely with Catholics throughout the diocese.

Second editor commutes from Subiaco Abbey to lead paper for 11 years
Father Augustine Stocker, OSB, came to Arkansas in 1887 at the age of 19 from Switzerland, and later became the second editor of The Guardian.