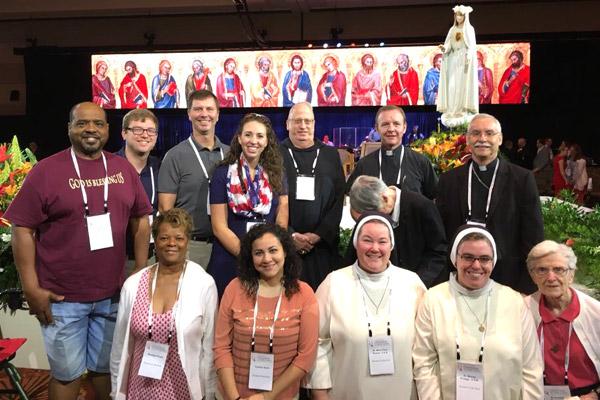 ORLANDO, Fla. — From July 1-4 the main floor of the Hyatt Regency Hotel in Orlando was transformed into a huge parish hall with places for worship, prayer, discussion and even coffee and doughnuts during the “Convocation of Catholic Leaders: The Joy of the Gospel in America.”

At the convocation 3,500 Church leaders — men and women religious, bishops and laypeople — gathered to set a new course for the U.S. Catholic Church.

Following a retreat format, each day started and ended with group prayer. Mass was celebrated each day in the hotel ballroom, and there were plenty of scheduled times for the sacrament of reconciliation and private prayer in a large room turned into an adoration chapel.

Many of the keynote sessions took the form of pep talks encouraging delegates to share their faith boldly with the world at large and within their own families and parishes. The numerous breakout sessions provided the working aspect of the gathering: closely examining what the Church is doing and where it can do more.

“The walls need to come down.” Sister Kathleen Burton, a Sister of St. Joseph from the Diocese of Camden, N.J.

More than 155 bishops attended the gathering, sitting with their delegations for meals and breakout sessions. Cardinals and bishops who spoke at keynote sessions or in Mass homilies encouraged participants that this was their time, their moment, stressing the urgency to bring God’s message of love to a divided world.

At the final Mass, described as a “Mass of Sending,” Cardinal Daniel N. DiNardo of Galveston-Houston said the Church is called to achieve great things in the face of the impossible — to unite people together by going to the peripheries of society and sharing the good news of Jesus through action rooted in faith.

“Sisters and brothers, we are in a very, very significant time in our Church in this country,” said Cardinal DiNardo, president of the U.S. Conference of Catholic Bishops, and he urged the delegates to receive God’s grace for the work ahead.

None of the homilists or keynote speakers sugarcoated the challenges for the modern Church and more than once speakers pointed out that Catholics are leaving the Church, particularly young adults.

But as Auxiliary Bishop Robert E. Barron of Los Angeles pointed out: “The saints always loved a good fight and we should like a good fight too.”

The bishop, who addressed the crowd through a video hookup July 4, told them it was an “exciting time to be an evangelist” but that they also should pick up their game to evangelize effectively.

Throughout the convocation Pope Francis was pointed out as a model for modern Catholics to follow in inviting others, especially those on the peripheries, to Christ. Speakers also were quick to quote his 2013 apostolic exhortation, “Evangelii Gaudium” (“The Joy of the Gospel”), which lays out a vision of the Church dedicated to evangelization — or missionary discipleship — in a positive way, with a focus on society’s poorest and most vulnerable, including the aged, unborn and forgotten.

Two homilies during the convocation specifically quoted the pope’s admonition in “Evangelii Gaudium” that Catholics shouldn’t be “sourpusses” but should reflect joy.

Washington Cardinal Donald W. Wuerl acknowledged that Catholics are not always comfortable with the idea of evangelizing, but said they need to be willing to step out of themselves and talk with people about their faith as part of an encounter the pope speaks about.

Part of this simply involves listening to people, caring for them and leading them to Jesus, said speaker Sister Miriam James Heidland, a sister of the Society of Our Lady of the Most Holy Trinity.

Delegates were repeatedly encouraged to reach out to the peripheries especially to immigrants and the poor but also to all members of the Church’s diverse family — people of all races, women and young people.

Sister Kathleen Burton, a Sister of St. Joseph who is co-director of the Office of Faith Formation, Family Life and Lay Ministry Formation in the Diocese of Camden, N.J. said, “The walls need to come down.”

“There’s a renewed sense of evangelization and re-evangelization,” the delegate told Catholic News Service. “We’re being challenged that we don’t wait for people to come to us, but we’ve got to go out to them.”

Vanessa Griffin Campbell, director of the Office of Ministry to African American Catholics in the Diocese of Cleveland, said the key to embracing diversity and going to the peripheries will be teamwork among laypeople, clergy and diocesan staff.

The Church should “not just open the doors on Sunday,” she said, “but make sure our doors are open Sunday to Sunday.”

At the end of the closing Mass, Archbishop Christophe Pierre, apostolic nuncio to the United States, congratulated attendees for the invigorating discussion.

He called it a “kairos,” or opportune moment, in the life of the U.S. Church and said he would tell Pope Francis: “the Spirit is alive in the Church in the United States.”

Sarah Spellins: Being radical for Christ