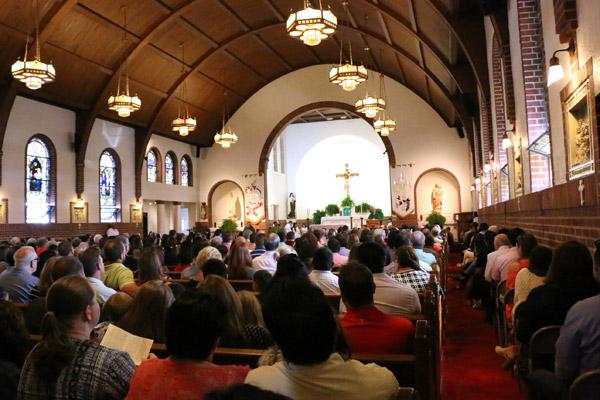 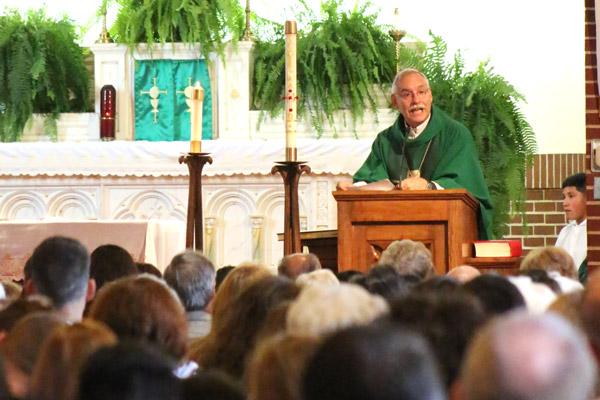 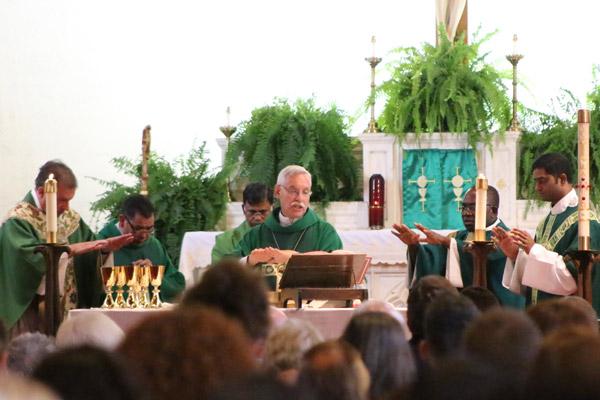 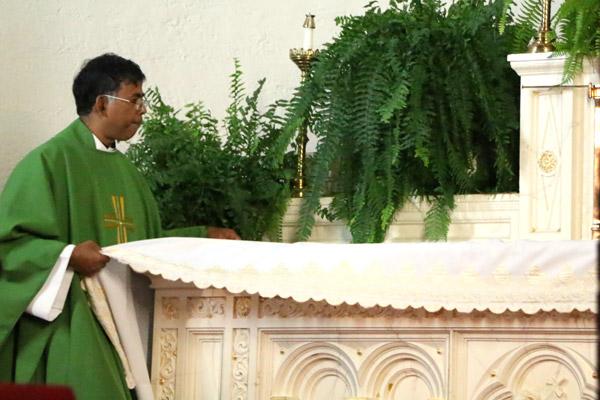 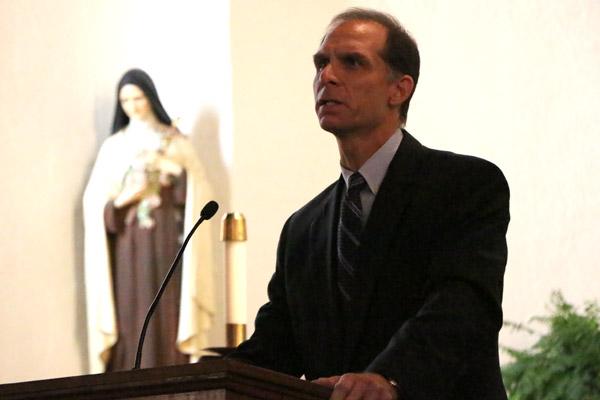 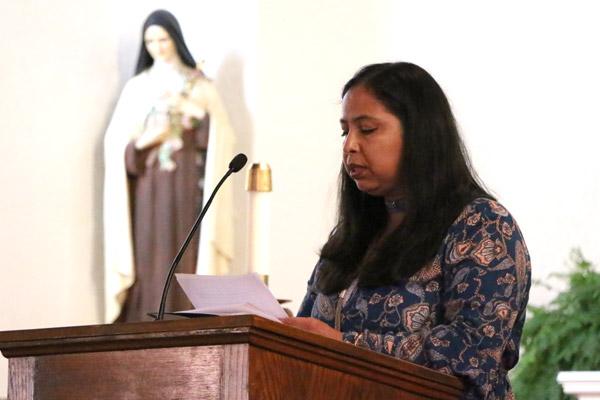 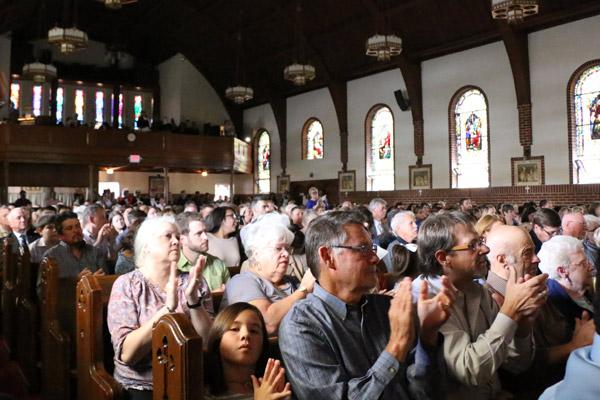 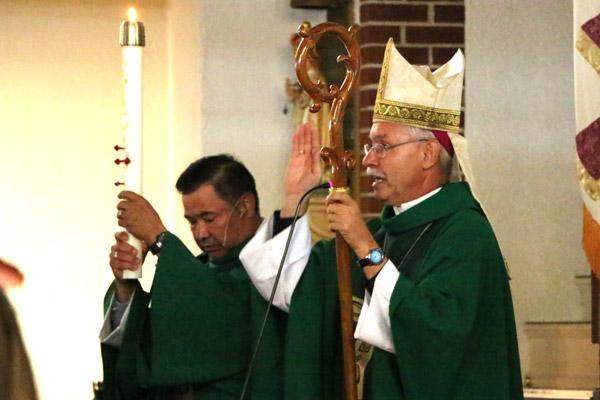 The last Mass on Church Street in Jonesboro

Parishioners of Blessed Sacrament say goodbye to 1933 building, look to the future 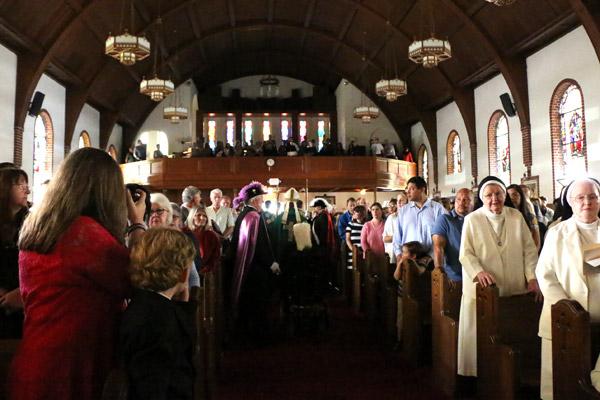 Sarah Morris
Bishop Anthony B. Taylor processes down the aisle of Blessed Sacrament Church in Jonesboro Oct. 1 after the final Mass in the building. The church was decommissioned during the Mass.

Sarah Morris
Bishop Anthony B. Taylor processes down the aisle of Blessed Sacrament Church in Jonesboro Oct. 1 after the final Mass in the building. The church was decommissioned during the Mass.

In 2015 St. Bernards Medical Center bought the two and a half acres where Blessed Sacrament Church, parish hall and offices are located for $3.5 million.

Construction of the 245,000-square-foot tower will begin in January with completion anticipated in the spring of 2019. The tower will include 14 surgical suites along with support programs, a 48-bed critical care unit, education rooms and part of the structure will be shelled in to allow for future expansion.

It also will feature a covered entrance leading into an atrium at ground level, with access to admissions and registration as well as a coffee shop, education rooms and a chapel.

JONESBORO — Holly Jordan considers the Blessed Sacrament Parish a close-knit family. She said it felt like she was saying goodbye to a part of that family Oct. 1 when she attended the last Mass to be held in the 1933 building.

“It was very emotional, but also it was a beautiful closing Mass and ceremony for all of us,” said Jordan, who has attended Blessed Sacrament for more than 30 years. “We got to see a lot of the priests who were here before and families that haven’t been here in a long time so it was a very good goodbye for everybody. Not that it’s not hard because it is. But, I think we all felt closure.”

Jordan was among the current and former parishioners and priests who attended a crowded final Mass Oct. 1 as Bishop Anthony B. Taylor and pastor Father Alphonse Gollapalli decommissioned the 360-seat church at 614 S. Church Street in preparation to move to a new location.

It is the place Ann Garner, 68, has worshiped in for more than 60 years.

“This is where I made my first Communion. I remember that so well,” she said. “My confirmation. Going to church every single day. Going to Blessed Sacrament School when it was right next door. I was married here. My children were baptized here and they went to school here and made all their sacraments. So, I have just gone through everything in this church.”

As she left the Church Street location one final time, she said the Oct. 1 Mass was a “mixed-emotions day.”

“It is very sad, but it is also exciting, too, for our new beginnings,” she said.

“It will be basically the fourth home for the Catholic church of Jonesboro,” he added. “So, this is a transition that has occurred before. Last time was in 1933 so no one here remembers that. It is growing pains, but it is also such a hopeful time as well and a time of growth and life in the parish.”

Bethany Stillion, who joined the Church at Blessed Sacrament in 2012, admitted she cried during the liturgy. However, she said she did not anticipate feeling as much joy as she did.

“There is so much more hope and so much more joy than I thought I would have saying goodbye to this place, to never be able to come back to the place I was confirmed,” she said “… I just thought it would be hard.”

Stillion said it helped to have Bishop Taylor remind the parish that there are parishes closing all over the United States for lack of parishioners while this church is decommissioning because there are too many here.

“That was a surge of joy, and I just thanked God over and over what a miracle that is,” she said. “Something special is happening here.”

Mary Diaz agrees the church is growing. But, she said she doesn’t know if the church to be constructed on 20 acres at 1105 E. Highland Drive — where Blessed Sacrament School is already located — will be big enough. The future 15,000-square-foot church is expected to hold about 800 people.

Diaz, 64, and her husband began attending Blessed Sacrament 30 years ago. She said those years have included the baptism of 27 godchildren, First Communions, confirmations, marriages and quinceañeras. Her family was one of the first five families who started the Hispanic ministry.

Blessed Sacrament Church has been planning the move to a larger location on Highland Drive since 2000 when it bought the land. In the second phase, a Knights of Columbus hall, school and parish hall were built on the property. The next phase will be the church followed by administrative offices.

The 1933 church will not be forgotten. Work began Oct. 2 to remove several items from the building to refurbish and store. Louis Schaaf, chairman of the administration committee for the New Church and Capital Campaign Committees and a parishioner for 38 years, said the parish will be reusing the pews, Stations of the Cross, organ, stained-glass windows, the foundation stone, bells and cross on top of the church.

By decommissioning the church and starting the removal of items now, it gave the parish plenty of time to finish that work before the building has to be razed in December, Schaaf said. The Church Street property was purchased two years ago by St. Bernards Medical Center for expansion.

“The hospital had a need for our property,” he said, “We have always worked with St. Bernards in trying to help them always meet their mission of healing, preaching and teaching. In a sense, it is very sad to lose our building as you know there was an annex that St. Bernards razed not too long ago and that used to be a school that the nuns taught at and so forth.

“It, again, is somewhat a partnership and we had the good blessing of God to have that 20 acres. It was for us to move,” he added. “I would say the expansion of the hospital gave us some incentive to say, ‘Well, maybe this is the time for us to look at moving the church out there.’”

Construction of the new church will begin in October, with completion around Christmas 2018.

Until then, Father Gollapalli said the church’s annual fall festival will be held at the Highland Drive site Oct 6-7. Church offices were moved temporarily to Blessed Sacrament School. The parish will now celebrate weekend Masses in St. Bernards Auditorium on Washington Avenue and daily Mass and adoration will be held at Blessed John Newman University Parish.

“Everybody gave their time and treasures at that time to help build this church and carry it onward to where it is today,” Brodell said.

While it has been a tough transition to say goodbye to the Church Street building, he said it was made easier knowing that “where our future lies is just going to be as great as this one.”

As he prepared to leave the Church Street building one final time, he said it is simply like how Mass ends each Sunday: “Today, the Mass has ended and go in peace, love and serve the Lord.”

In 2015 St. Bernards Medical Center bought the two and a half acres where Blessed Sacrament Church, parish hall and offices are located for $3.5 million.

Construction of the 245,000-square-foot tower will begin in January with completion anticipated in the spring of 2019. The tower will include 14 surgical suites along with support programs, a 48-bed critical care unit, education rooms and part of the structure will be shelled in to allow for future expansion.

It also will feature a covered entrance leading into an atrium at ground level, with access to admissions and registration as well as a coffee shop, education rooms and a chapel.