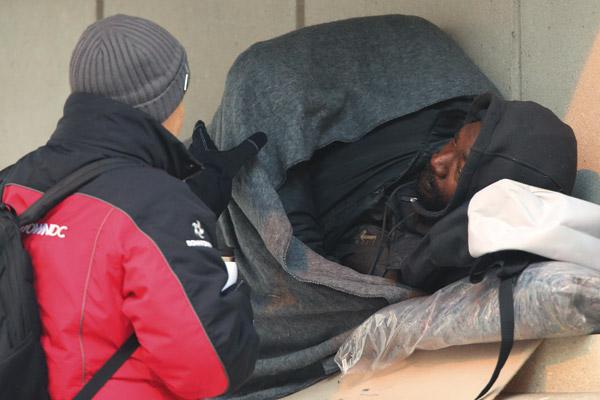 Arkansans are used to record-breaking summer heat and mild winters, but 2018 ushered in a cold snap. According to the National Weather Service in Little Rock, New Year’s Day was the second coldest on record for the city, with the coldest high of 24 in 90 years and the coldest low of 10 since 2001. Throughout the state, single digit lows, ranging from 1 degree in Mountain Home to 16 degrees in Texarkana, swept the state.

For those who work with the homeless, it’s more than just an inconvenient chill. They are challenged to keep those in need from freezing to death.

Jericho Way, a homeless day resource center in Little Rock operated by the Catholic nonprofit Depaul USA, has contacted other homeless outreach organizations in recent weeks to help those find a warm place to sleep.

“We’ve definitely experienced an increase in guests,” said director Mandy Davis, adding they’ve provided meals to about 20 to 25 more people each day in December. “There are things we’ve done to prepare for this — order more food in the winter and summer.”

The center has extended hours when able beyond the normal 7:30 a.m.-2:30 p.m. Monday through Friday. Davis has told clients that Jericho Way will call local shelters and pay the nightly fee in freezing temperatures if they cannot, which can cost homeless about $5 to $7 per night. Local shelters have also worked with Davis to allow clients to stay later than normal in the morning to give Jericho Way time to open.

If a client refuses to go to a shelter, which can happen if the person has a pet or if they suffer from mental illness, Davis said there are temporary warming shelters throughout the city. She also reached out to The Van charity, which offered temporary shelters at churches in Little Rock and North Little Rock.

If a client insists on staying outside, Jericho Way is “stocked to the brim” with coats, blankets and boots to give away, Davis said. On a practical level, having people out on the streets in extreme weather, “costs the city a ton of money.”

“They’re calling ambulances, police officers, the fire department, they’re calling emergency vehicles” to respond to a health crisis, Davis said, which “may not have come to a boiling point if they were not in the elements.”

The Riverview Hope Campus in Fort Smith provides services from adult education to daily meals, and also gives homeless clients a warm place to sleep. Since opening Sept. 29, it has usually stayed at maximum capacity with 105 people each night, said executive director Chris Joannides. However, as long as temperatures drop below 32 degrees, they’ll open the doors to whoever shows up so “they don’t freeze to death. It’s cold … I wouldn’t want to be out there. It’s unhealthy.”

About eight more people — those who live by the Arkansas River in tents — have showed up in recent weeks, Joannides said.

The Hope Campus is open from 6 a.m. to 10 p.m. each day and overnight clients are allowed to stay during the day and use the services, including taking a shower, doing laundry or reading in the library. Anyone over 18 is allowed to spend the night. The local Salvation Army and Community Rescue Mission take in children and families, allowing the Hope Campus to focus on single adults and married couples.

Pair said he generally receives about 10 phone calls a day, but on Jan. 2-3, he’s fielded about 35, primarily needing help with an electric or gas bill.

The society is able to provide $100 per person to their utilities provider, if they show a copy of the bill, photo ID and last four digits of their social security number. The client must also prove they can raise the remaining amount.

“We’re not just a hand out; we want to help them,” said Pair, who also serves as board president for Hope Campus.

“A lot of these people have small kids and let’s face it — if they get their heating turned off they’re going to freeze to death because there’s not enough places for them to go,” he said, adding many with shelter will not come to the campus to sleep. “Sometimes if you’re on HUD (Housing and Urban Development) and you get your electricity or gas cut off, you could lose your HUD and you become homeless.”

Pair said some will try to pile on blankets or resort to more dangerous tactics.

“I overheard a guy yesterday (say) he got his electricity turned off and opened the oven door to heat the house that way, which is extremely dangerous with carbon monoxide” poisoning, he said. “Houses burn down because they try to find ways to warm their homes that aren’t safe.”