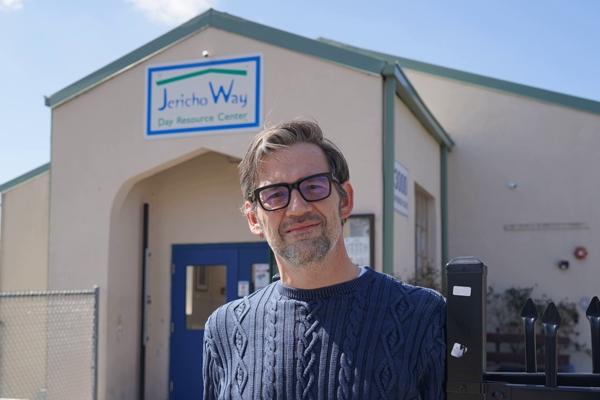 For Jericho Way’s new director James Evans-Hammond, a good day at the homeless day resource center in Little Rock is seeing his staff hard at work to go above and beyond to serve visitors, whether they are seeking assistance with their laundry, a hot meal, permanent housing. a job or simply a listening ear. It’s always an opportunity to be Christ-like.

“It has always guided my work. It’s something for me; the way I’ve always kind of approached everything is being Christ-like,” the 49-year-old said, adding that with any leadership role in social work, it’s about judgment calls. “And so for me, I put it to them, ‘is this Christ-like? Am I behaving Christ-like? Is making this determination, is this in the best interest of this individual?’ I feel like I was guided by Christ to come here and make that call.”

Evans-Hammond, of North Little Rock, is the third executive director of the center since it was taken over in 2015 by Depaul USA, a Catholic nationwide nonprofit helping those experiencing homelessness.

“James’ work with people experiencing homelessness is expansive. He’s comfortable with the population, competent and passionate,” former director Mandy Davis said. “In my opinion, he’s been ready to lead, and this was a perfect opportunity for him.”

"The way I’ve always kind of approached everything is being Christ-like.”

Previously, Evans-Hammond spent about five and half years with St. Francis House Ministries, a Little Rock nonprofit of the Episcopal Church assisting homeless veterans, first as a case manager, then program director.

Though hesitant to leave St. Francis, he said he always had “a special feeling about Jericho.”

“A lot of it has to do with the fact that Jericho’s inclusive — we accept everybody, we work with everybody,” instead of just a select group of homeless individuals, he said.

It’s been a lifetime of God moving him to professions he never expected. Growing up in a rural community outside of Jonesboro, he had a traumatic misconception about social work.

“I grew up in a low-socioeconomic home, and I grew up with my grandmother. I was 16 months old when my mom, she had left the house. My grandmother raised me. So ‘social worker’ to me was who came to threaten to take me away from my grandmother,” he said.

After working as a hair stylist for 10 years, Evans-Hammond received his bachelor’s degree in psychology and counseling from the University of Central Arkansas in Conway in 2013 and his master’s degree in social work from Arizona State University in 2018. He is an adjunct professor at the School of Social Work for the University of Arkansas Little Rock, though not teaching this semester.

Jericho Way has continued to offer services throughout the COVID-19 pandemic, but mid-March was the first time the center has allowed people inside to congregate versus individuals coming in only for appointments. Evans-Hammond said he wants to continue placing clients in affordable housing and building more community partnerships. He also wants to provide more case management to make sure clients not only get stable housing but can maintain housing.

“How many homeless college students do we have? Is there a need for a program here to help them get off the streets, get out of shelters, be able to stay somewhere that will allow them to be successful while finishing school? That’s something that I’m wanting to research and see,” he said.

Already, there have been several moments that have touched his heart, including three instances in one week of reuniting homeless clients with their families. One man slept near the street on the other side of the center’s fencing. He was ill but refused help. But the next day, they were able to convince him to come inside and receive help from UAMS Medical Center.

“During that time, we were able to get enough information to locate his mother, who had not been able to find him in a year,” he said, adding social work is a “selfish profession” in that you always get something back when you give of yourself.

Though not Catholic, Evans-Hammond said he’s committed to keeping the Catholic spirit alive.

“To me, there’s a good bit of similarities in Episcopalians and Catholics,” he said. “And believing in the values of St. Vincent de Paul, really putting those people that are less fortunate first.”

For those who want to learn more about volunteering or donating to Jericho Way, Evans-Hammond can be reached at .