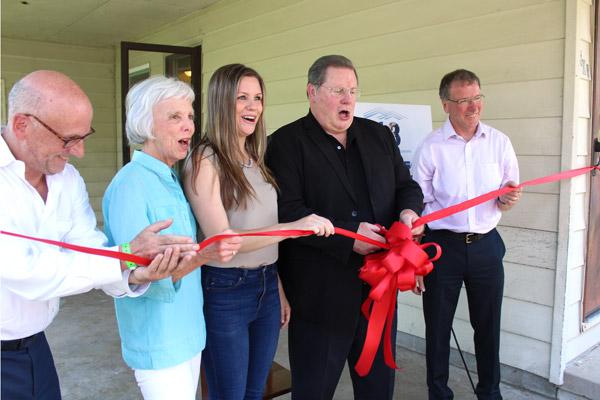 Representatives of Depaul USA, a nationwide Catholic service organization focused on the issue of homelessness, launched the renovation of its first rental home in Little Rock June 6. The group hosted a ribbon cutting before a gathering of Depaul leadership, community dignitaries that included Mayor Mark Stodola, volunteers and local press.

The 970-square-foot house, located at 6601 Heather Lane, was purchased by Depaul USA using entirely donated funds. Donors, which included JenByRo Charitable Fund, Judy Thompson of Little Rock and the Sisters of Charity of Nazareth, Ky., contributed $50,000 to cover purchase and renovation of the empty single-family property.

Charles Levesque, Depaul USA president and executive director, said renovation work on the home is expected to be completed in time to welcome its new rental occupants this year. The organization’s foray into affordable housing is part of 13 Houses, a campaign by Depaul International with the goal to develop 13 units of housing in all 151 countries with a Vincentian presence.

“The amazing news is, this is the first home in the United States (as part of 13 Houses),” Levesque told the crowd. “And it gets better; it’s the first home in the world in this campaign, because the campaign doesn’t start until November. We’re jumping the gun. So you guys are making history here today with this house.”

Depaul USA entered Little Rock three years ago with the opening of the Jericho Way Day Resource Center. Little Rock is one of only six cities in the U.S. with such a presence.

Levesque said plans are already solidifying for the organization’s next Little Rock housing venture, which will be to build a series of affordable duplexes to serve the homeless and near homeless in the city.

“What should be the American Dream is that you have a place to live that is affordable and safe and clean and that’s what we’re trying to do today,” Levesque said from the dais. “When we came here three years ago ... we said we’d do more than just Jericho Way. Today we’re trying to fulfill that promise by getting into the affordable housing arena.”

“We want to provide housing for people who have income streams, who can pay rent, but need a good, clean and safe place to live. This house is our first step.”