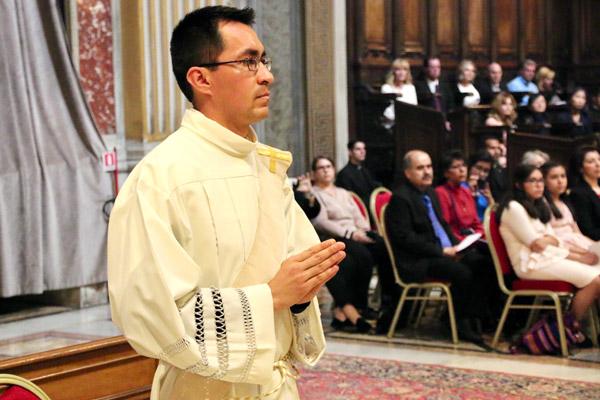 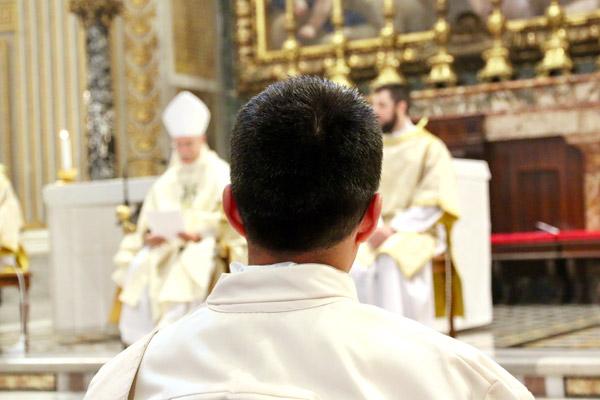 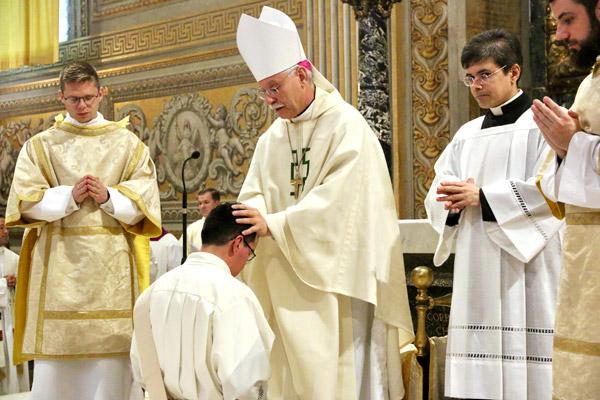 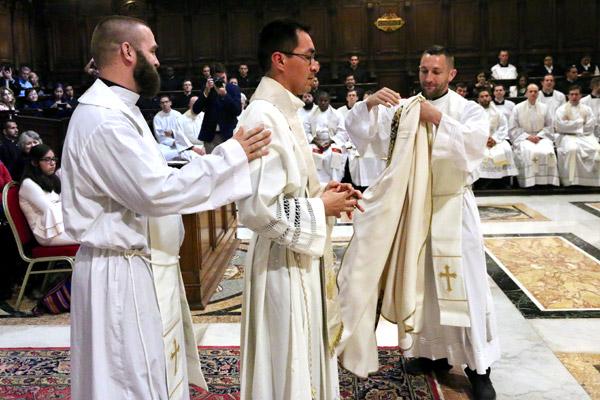 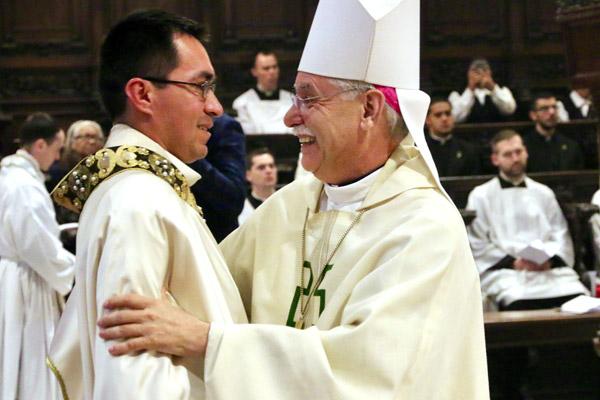 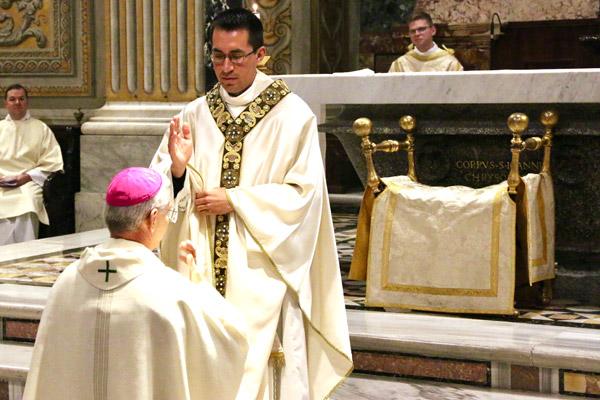 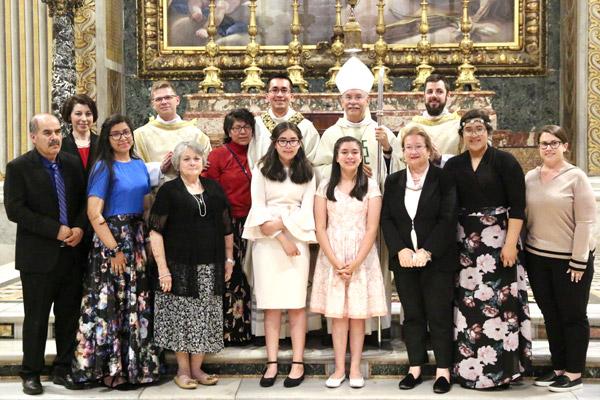 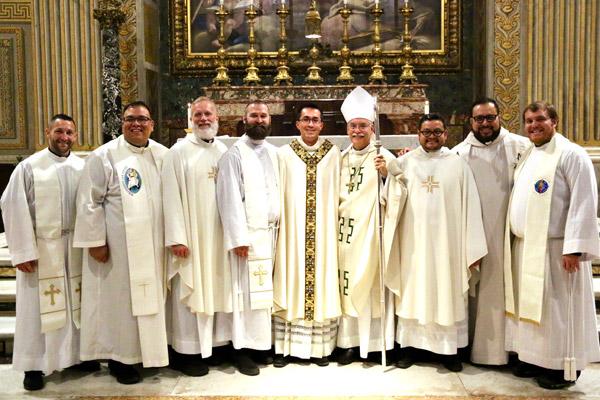 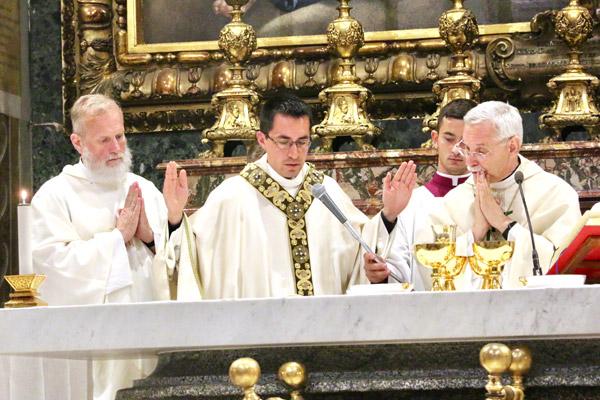 Inside the Choir Chapel in St. Peter Basilica in Rome, ornate artistic renderings of Christianity fill the space, from God creating the universe to the Israelites’ crossing of the Red Sea to the baptism of Christ. Amid the gold, marble and mosaic masterpieces, Father Martín Amaro added to the universal story of God’s continued work in our world by being ordained to the priesthood for the Diocese of Little Rock May 11.

“It’s wonderful. I think it was thanks to so many people that I was able to arrive at this moment. And so for me, a lot of those people will be there and it’s very important to have them there, and to know that I have their support and to know that they’re always praying for me,” Father Amaro told Arkansas Catholic May 2, ahead of his ordination.

Bishop Anthony B. Taylor, who gave him the option to be ordained in Rome, presided over his ordination. More than 100 people attended the Mass, including Msgr. Scott Friend, diocesan vocations director, as well six diocesan priests, Fathers Stephen Gadberry of Batesville, Jeff Hebert of Conway, Juan Manjarrez of Little Rock, Rubén Quinteros of North Little Rock, Martin Siebold of Rogers and Juan Guido of Fort Smith.

His parents, Martín and Graciela Amaro of Lonoke, were not able to attend, but his younger sisters Elizabeth and Amy Amaro, also of Lonoke, and his aunt Manuela Negrete of North Little Rock were able to make the trip.

“It is the greatest joy, something only God can give.” Father Martín Amaro

“Father Martín’s favorite church in Rome has a sign at the door that reads ‘Providentia Dei’ (‘providence of God’ or ‘God will provide’). It really touched me how that small phrase represents the faith and courage that Father Martín has to get to this point. I’ve been very blessed to witness his ordination and to share it with brother priests from Arkansas,” said Father Quinteros, director of spiritual formation at the House of Formation and pastor of Immaculate Heart of Mary and St. Mary churches in North Little Rock.

Following his ordination, Father Amaro told Arkansas Catholic, “It is the greatest joy, something only God can give. Listening to Bishop Taylor reminding me of my initial quote when I entered seminary, to always trust in God’s providence,” was a powerful moment.

Though not able to attend the ordination, one of Father Amaro’s greatest influences has been Mexican Archbishop Jorge Carlos Patrón Wong, who is the Vatican’s Secretary for Seminaries at the Congregation for the Clergy.

“He’s been a very good friend, but not only a friend, he’s been like a father to me. He’s one of the people I met here in Rome that helped me so much throughout my formation and my relationship with him, my interaction with him I’ll never forget and I’m very grateful to him,” Father Amaro said, adding the most important lesson he learned from him was simplicity. “He has a very high post in the Vatican and despite that, he doesn’t have a car, he’s always visiting seminaries. So just a very simple man and just seeing that from him has been a true example on how a priest should live.”

Father Amaro, 27, originally from Guanajuato, Mexico, came to the United States when he was 10 years old. After graduating from high school in 2010, he entered the seminary and went on to earn a degree in philosophy from Monterrey Seminary in Mexico. He studied at the Pontifical North American College the past four years.

“I definitely couldn’t do it alone. One of the ways I got through was through the help of others. So many people helped me in so many different moments,” he said of his fellow seminarians, classmates and professors. “I think that it was through them that God’s hands were able to hold my hand and push me forward.”

Surrounded by the relics of saints and the cities and paths that many walked on, Father Amaro said his devotion grew particularly for St. Ignatius of Loyola and St. Peter.  He chose to be ordained in the Choir Chapel and his first Mass was celebrated in the Basilica of St. Mary of the Altar of Heaven, or Santa Maria in Ara Coeli.

“I chose St. Peter’s because that’s my favorite church in Rome, I go there very often; I’ve been doing so for the past four years, for my devotion to St. Peter,” Father Amaro said, adding that his second favorite church is St. Mary of the Altar. “It’s dedicated to Our Lady and for me that’s also very important.”

Upon returning to the United States, Father Amaro will serve in Fort Smith, a city he doesn’t yet know much about.

An earlier version of this article incorrectly spelled Father Martin Siebold’s name. This article has been updated.