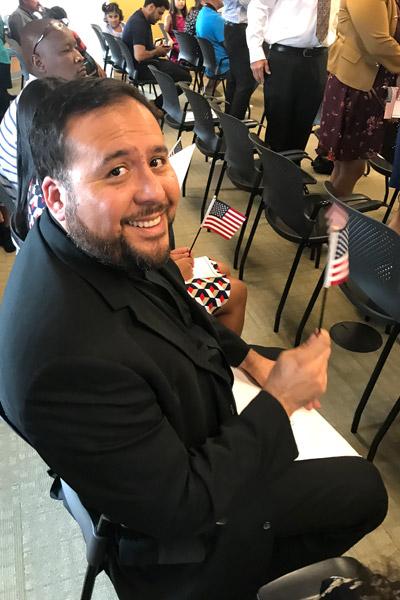 There are moments in life that are so transformative, it’s as if you’re walking out of the room a completely different person than you walked in. Often, events of this magnitude come along only once — Father Rubén Quinteros has had three.

During his ordinations to the transitional diaconate in 2009 and to the priesthood in 2010, Father Quinteros rose a changed man from the one who lay prostrate on the floor just seconds earlier.

The third happened June 6 when he raised his hand and took the Oath of Allegiance along with nearly 30 other new Americans. The final stanza, “so help me God,” had barely left his mouth and Father Quinteros felt, again, reborn.

“For me, becoming a citizen was part of God’s call; I cannot separate that from the vocation that I have received from God,” he said. “That vocation was to be a diocesan priest in a specific diocese, that is Arkansas and the Diocese of Little Rock. So, becoming a citizen is part of the process of my own vocation.”

Father Quinteros, pastor of Immaculate Heart of Mary Church and St. Mary Church, both in North Little Rock, and director of spiritual formation at the House of Formation, was born and raised in Argentina. He was attending theology school in Mexico as a member of the Argentina-based Brothers Disciples of Jesus when he discovered his true charism was working with the people, something he felt monastic life would not afford him.

Arkansas entered the picture through his interaction with some Carmelite nuns who had connections to The Natural State. Before he knew it, he spoke with diocesan vocations director Msgr. Scott Friend and landed at the University of Arkansas Little Rock.

“I always had fascination for different cultures and languages,” he said. “My family has different backgrounds and races; my great-grandfather immigrated to Argentina from Lebanon. So, I kind of had that in my DNA. But I never thought that it would be the United States.”

Father Quinteros’ path to citizenship covered 15 years, starting with a student visa, then a religious visa and then application for permanent residency, granted five years ago. In year four of that status, he applied for full citizenship, a process that included background checks, interviews with government officials, a language test and a civics test. He said the citizenship process helped him understand and, he hopes, inspire other immigrants going through the system.

“Bishop Anthony (B. Taylor) said during the homily that he preached during my ordination, ‘The people will admire your talents, but they will relate to your struggles.’ That just stays with me in the back of my mind when I pray and when I struggle with things,” he said.

“There were 29 people becoming a citizen the same day I did and I talked to them and shared their stories of how they struggled and dreamed to get to that day. For many people that were there, their process was longer than mine. It was humbling and it was beautiful just to be there and to witness their crosses.”

Father Quinteros said his citizenship status never impeded him in his pastoral assignments; many people assumed he was already a citizen, if they thought about it at all. Even so, he said being able to call himself an American citizen has lent new zeal to his ministry.

“I have received the respect of the people in every place I’ve been to, so I don’t think (citizenship) changes that,” he said. “But it gives me more confidence to speak to the reality of things in our country that we know are not moral decisions and that they shouldn’t be that way.”

“It just gives me the freedom to speak what I think and what the Church teaches without the fear that somebody will tell me I’m not part of this country. Because I am.”