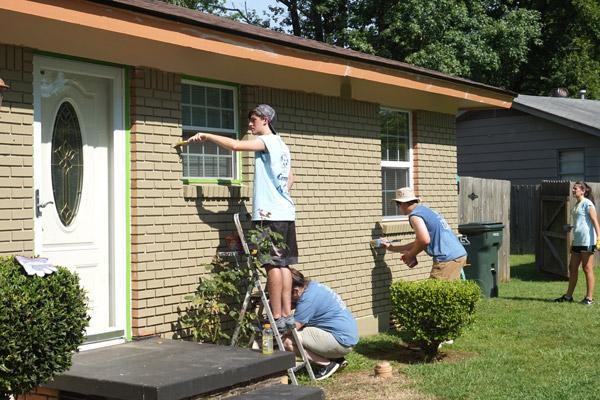 Angel Sasser of St. Jude Church in Jacksonville stood balanced on a ladder, carefully rolling a coat of white paint on the ceiling of a carport. Other teens wielded paint brushes and pressure washing hoses on bricks and siding to spruce up four homes in Southwest Little Rock July 8, part of Habitat for Humanity’s neighborhood revitalization program.

But was more than just a coat of paint. They were living the Gospel.

“I always find joy in helping others,” the 18-year-old said, adding that seeing the smiles on people’s faces “is always heartwarming … It helps to find the face of God in people. Everyone should do it.”

It was her fourth time attending Catholic Charities Summer Institute, known as C2SI, along with 93 other teens. For 12 years the program, hosted annually by the Diocese of Little Rock Youth Ministry Office and Catholic Charities of Arkansas, allows teens to give back to the local community while also learning about social justice.

Homeowner Toniette Watson peeked out her door and smiled at the progress, explaining she had picked out the gray-tinted color herself.

“It means the world; I have pride you know when people come by and see (the house) freshly painted. We sit under the carport a lot and people will drive by and say how pretty it looks. That’s all we got so it makes me feel so good. I’m so thankful for you guys really,” she said.

Teens also worked at the Arkansas Food Bank, the veterans’ health care center on Fort Roots in North Little Rock and with the homeless at Jericho Way, River City Ministries and the Salvation Army.

“She opened up about her whole story and encouraged us to stay in school, stay in the faith” which was inspiring given her situation, Engel said. “I really found my love for service here. I really love learning about social justice and immigrants.”

Local leaders involved in nonprofits, programs and ministries, spoke to the teens about what sparked their passion for a variety of community needs including the homeless, environment and pro-life work. Liz Tingquist, diocesan director of youth and campus ministry, said they wanted to work with the ongoing Catholic Charities theme that “every parish is a Catholic charity.” Youth were separated by geographical area to come up with a project they are passionate about and bring it back to their community to implement.

“I’ve found that there are several students that have gone all the way through high school (with C2SI) and it’s been great and they’ve been educated, but now I want this to be a stepping stone to finding their passion and taking action about it,” she said, later adding, “To me everybody finds Jesus in different ways but when you really allow opportunities for kids to be the hands and feet of Christ, and we do a lot of apostolic reflection during the week and our question always is where did you see the face of Christ today? And how were you the face of Christ to other people?”

Seminarians worked alongside teens, including Jonathan Semmler, 21, going into his third year in seminary, and Duwan Booker, 22, who graduated in May from Hendrix College in Conway.

“For me, it’s all about combining service with prayer,” Semmler said.

It was his eighth time to attend C2SI, crediting the program as “the most important event” in his formation toward his religious calling, as it was the first time he experienced “peace from service. This (program) holds a special place in my heart.”

Booker said he was looking forward to “seeing the hearts and minds changed and that’s through service and mission.”

Garrett Locknar, 17, a member of St. Boniface Church in Fort Smith, came back to attend C2SI because the experience was directly following Jesus’ call to mission.

“It’s like we’re stepping into the feet of the disciples,” he said. “ … I think it’s just being able to physically see the affect we’re creating.”

Throughout the past nine years, Angie Capps and her husband Dwayne, youth ministry team members at St. Paul Church in Pocahontas, have been bringing youth to C2SI, including their three children.

“This is just where my heart is,” she said. “They can see the other side of the world. It opens their eyes, let me tell you.”

While Heather Throesch carefully ran her paint brush across the side of the home, the 17-year-old who attends youth ministry at St. Paul and Mass at St. John in Engelberg, explained it was her first time at C2SI.

“This is pretty fun. I feel at peace here, helping others that don’t get help,” Throesch said. “I’m hoping these people feel loved and see the face of Jesus through us.”

Kimberly Eden, a parishioner at Immaculate Conception Church in North Little Rock, said her four children, ages 14 to 20, have experienced C2SI, the first back in 2016. The three younger children attended this year. As a local attorney, Eden said most of her clients use the programs her children volunteered at during the week.

“They get to serve others in the way that Christ did. The whole social justice (aspect) and serving others not as fortunate as you instills a true understanding of what Jesus did and what he did to serve others and ultimately his sacrifice for us,” Eden said. “It has done nothing but strengthen all of my children’s faith, and I’m really proud to be a part of it honestly.”