Conway parishioner has made about 20 wood-crafted items to benefit school, parish 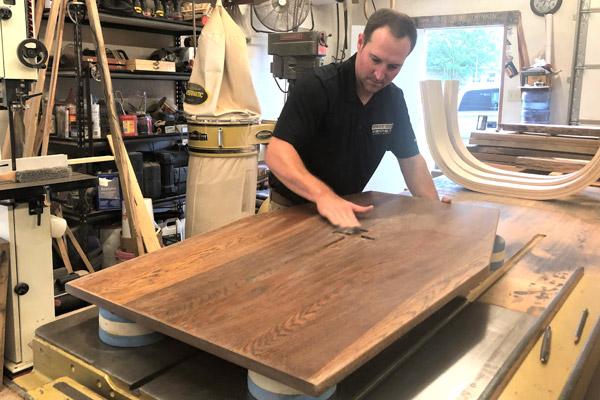 File photo /courtesy St. Joseph School
Lucus Strack constructs a coffin with wood from old church pews and a pecan tree that once stood behind the old rectory at St. Joseph Church in Conway.

File photo /courtesy St. Joseph School
Lucus Strack constructs a coffin with wood from old church pews and a pecan tree that once stood behind the old rectory at St. Joseph Church in Conway.

Read more about Catholics who have made items to benefit their parish or community:

CONWAY — About 100 years of church history and a way to give back to Catholic education is encased in a diamond-shaped western red cedar coffin.

Tucked in storage at the St. Joseph School endowment office in Conway is a hand-crafted coffin, made from pews used in the original St. Joseph Church, built in 1926, along with other reused wood, including the trim from the original church doors. A removable cross is carved and mounted, taken from the wood of a 90-year-old pecan tree behind the former rectory.

“Just the fact that we can reuse that wood, it’s a very sentimental thing, knowing our ancestors and family that had a part in building the church, and we spent all our lives raised in the church and into adulthood,” said Lucas Strack, one of the craftsmen who helped build the coffin.

“It is just a sentimental and meaningful thing for people who go here … when they die, they get to be buried in something that was a part of St. Joe for their entire life.”

The coffin is currently being sold at $3,500. All money raised will go to support St. Joseph School. While it is particularly meaningful for members of the parish, Jacqueline Kordsmeier, executive director of the endowment, said anyone can find a faith connection to the simple, yet elegant coffin — not a casket, which would be a rectangle.

“It is for that type of person who is wanting something simple and with sentimental value for their remains to be buried in,” she said. “You’re benefiting Catholic education by purchasing it.”

Strack, along with fellow parishioners Tim Nabholz, Raymond Gunther, Jerry Hiegel and John Nabholz, worked on the coffin last year, in preparation for it to be auctioned off at the annual St. Joseph Bazaar’s silent auction in August. When Bob Nabholz, founder and chairman emeritus of Nabholz Construction, died in 2002, his sons built him a pine box coffin, something he requested. The idea stuck with Strack. In their free time during a 2018 men’s retreat at Subiaco Abbey, Strack, Gunther and Hiegel visited the abbey’s wood shop, where monks build coffins for their fellow monks’ burials.

They received a copy of the plans and retrieved some of the pew wood from the Hambuchen Furniture warehouse, where it’s been stored for about 20 years. Strack, a draftsman at H+N Architects, has made close to 20 items, from canoes to cutting boards, to benefit the church and school in the past decade.

For about two months, the men would meet to cut, assemble and sand the various pieces together.

“It meant a lot to us; we jokingly called it ‘holy wood’ even though it’s not,” Tim Nabholz said.

When design plans were cemented for the St. Joseph Spiritan Center, officially opened in summer 2018, it included cutting down a 90-year-old pecan tree.

“Growing up, I picked pecans from that tree on the playground. For that to be that old and big of a tree, it had to have meant something to someone over the decades,” Strack said.

There were no bids at the silent auction for the coffin, likely because of the need to store it. For those interested in purchasing the coffin, call the St. Joseph Endowment Office at (501) 329-1818.

Read more about Catholics who have made items to benefit their parish or community: