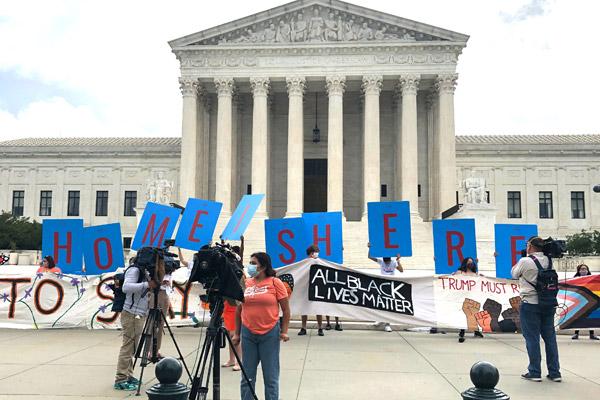 CNS / Rhina Guidos
News crews film supporters of the Deferred Action for Childhood Arrivals program holding signs and cheering at the U.S. Supreme Court in Washington June 18 after the justices handed down the DACA ruling.

CNS / Rhina Guidos
News crews film supporters of the Deferred Action for Childhood Arrivals program holding signs and cheering at the U.S. Supreme Court in Washington June 18 after the justices handed down the DACA ruling.

WASHINGTON — Before college student Luz Chavez left her Gaithersburg, Md., home June 18 to hear a decision on the steps of the Supreme Court of the United States, her mother prayed for an outcome favorable to her daughter, whose ability to study, work and not be deported at some point soon hinged on what the justices had to say.

Her prayers were answered when the justices voted 5-4 to block the Trump administration’s decision to end the Deferred Action for Childhood Arrivals program, known as DACA, which gives certain legal protection to hundreds of thousands of young adults like Chavez, brought as children to the U.S. by their parents without legal documentation.

“It finally happened, and we did it together and in community,” Chavez, a student at Trinity Washington University, told Catholic News Service. But Chavez was well aware the victory was perhaps only temporary.

Pundits were weighing in on whether the decision against the move to stop DACA, a move the court’s majority called “arbitrary and capricious,” gave the administration instructions on how to end the program legally, and only ruled on the way it went about ending DACA. Even if it that’s not the case, those like Chavez say that keeping DACA is not the end goal.

“At the end of the day, DACA is still only a temporary protection and we’re pushing for a permanent protection, not just for immigrant youth but for our whole families,” she said.

DACA was implemented in 2012 under an executive order from President Barack Obama, but in 2017, the Trump administration rescinded it with its own executive order. Its future has since been in the hands of the Supreme Court. The program allows beneficiaries who meet certain criteria the opportunity to study and work in the U.S. and exempts them from deportation.

U.S. bishops declare call-in day in effort to save DACA