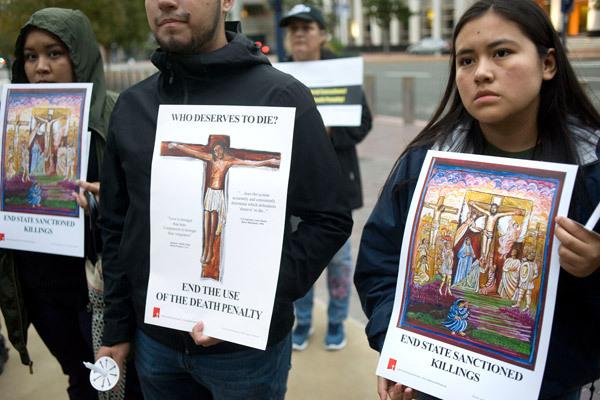 Editor's note: This story has been updated

Shortly after 2 a.m. July 14, the Supreme Court cleared the way for Daniel Lee, convicted of killing an Arkansas family of three in 1999, to be put to death by lethal injection, according to The Washington Post. He was executed at 8:07 a.m. in Terre Haute, Ind., telling those present, "I've made a lot of mistakes in my life, but I'm not a murderer," and said in his final words, "You're killing an innocent man," the Post reported. The Supreme Court released an unsigned 5-4 order to allow the execution to proceed. A judge's order had initially halted the executions, saying the death-row inmates could argue the drug cocktail for the lethal injections was unconstitutional.

“By all measures, this execution was unnecessary and avoidable,” said Krisanne Vaillancourt Murphy, executive director of Catholic Mobilizing Network, the national Catholic organization working to end the death penalty and promote restorative justice. “The federal government relentlessly plotted its course to execute Daniel Lee despite a historic decline in public support for the death penalty, clear opposition by the victims’ family, unwavering Catholic opposition to the restart of federal executions, and an unyielding global pandemic which has already taken more than 135,000 American lives.”

“What justice was served here? In restarting the practice of state-sanctioned executions, our federal leaders have demonstrated the pro-life values they profess are flimsy, performative, and wholly inconsistent," Vaillancourt Murphy said, adding, “On this profoundly sad day, we lament the wrong-headed return of federal executions. Despite the horrific action this morning, we know all life is sacred, and every person has dignity.”

WASHINGTON (CNS) -- A U.S. District judge delayed the executions of federal inmates on July 13 as critics of the death penalty have continually denounced the decision June 15 by Attorney General William Barr to set execution dates for four federal prisoners on death row, including one who killed an Arkansas family.

According to the Associated Press, U.S. District Judge Tanya Chutkan ordered delays to the executions as legal issues still need to be resolved regarding the lethal-injection drugs. Daniel Lee was set to be executed July 13, hours before the judge ordered the delay. A day earlier, a federal appeals court lifted the hold on his execution, which the victims' family had requested due to concerns that traveling to the execution would put them at risk for COVID-19. According to Reuters, some of the relatives of Lee's victims opposed his death sentence while his accomplice Chevie Kehoe received life in prison.

Lee, found guilty of killing three members of an Arkansas family in 1999, "has long since renounced the skinhead groups he joined as a youth," said a June 15 statement from his attorney, Ruth Friedman. "Mr. Lee's indisputably more-culpable co-defendant received a life sentence, in large part because the government relied on junk science and false evidence to secure both Mr. Lee's conviction and his death sentence."

"The federal government's decision to pursue executions is wrongheaded. It is profoundly disappointing to see our federal government take such great pains to restart executions -- a practice which plainly violates Catholic teaching and disregards the sacred dignity of human life," said a June 16 statement by Krisanne Vaillancourt Murphy, executive director of the Catholic Mobilizing Network.

"It is even more disheartening," she added, "when one considers the widespread failures of the federal death penalty system, including issues of racial bias, arbitrariness, innocence and more."

The other inmates that were scheduled for execution are Wesley Purkey on July 15, Dustin Honken on July 17 and Keith Nelson on Aug. 28.

The Justice Department said in a June 15 statement announcing the impending executions, "Each of these inmates has exhausted appellate and post-conviction remedies, and no legal impediments prevent their executions, which will take place at U.S. Penitentiary Terre Haute, Indiana.”

"That's bull," said Robert Dunham, executive director of the Death Penalty Information Center, which he added does not take a stand "one way or the other" on capital punishment, but critiques its application.

The Trump administration, which had been trying to set execution dates, won a court victory in April when the U.S. Court of Appeals for the District of Columbia Circuit set aside a district judge's injunction that blocked four death penalty sentences from being carried out.

But Dunham noted an appeal to stay the injunction's lifting was filed "several weeks ago" at the Supreme Court, and he expects the justices to rule on the request before its current term ends in early summer.

Dunham criticized the scheduling and timing of the proposed executions in a June 16 phone interview with Catholic News Service.

"The timing is also extraordinarily suspect. If an administration is concerned about the rule of law, and the integrity of the judicial process, you would not have death warrants issued while the legality of the federal execution protocol is still being determined by the courts," he said.

When the first bid to execute the prisoners was made last summer, "a number of corrections officials who had themselves carried out executions or supervised executions wrote to the Justice Department warning that such a compressed schedule magnifies the risk of an error and also increased the level of trauma that would be experienced by the prison personnel who are tasked with carrying out the executions," Dunham added.

"One has to wonder what possible penological justification there is for carrying out three executions in five days after nobody in the federal system has been involved in any execution in 17 years," he said. "That would be much more like a political act than an act that has any legitimate policy justification."

Dunham noted that under the original schedule, the first executions would have been carried out just before the first presidential primaries. Now, they will bracket the Democrats' and Republicans' national conventions. "If the administration respected the rule of law and the integrity of the court, it would not be able to carry out executions at a time in which it believes it could drive political benefit from it," he said.

Lawyers for three of the condemned prisoners also blasted the Justice Department's announcement.

Purkey, now 69, was sentenced to death for the 1998 rape and murder of 15-year-old Jennifer Long.

"The devastating combined effects of schizophrenia, Alzheimer's disease, dementia and a lifetime of trauma have left Wes Purkey unable to comprehend why the federal government plans to execute him," said a June 15 statement from his lawyer, Rebecca Woodman.

"While he long ago accepted responsibility for the crime that put him on death row, he no longer has any rational understanding of why the government plans to execute him," a violation of Eighth Amendment guarantees against cruel and unusual punishment, Woodman said, adding, "No execution should proceed unless and until the question of Wes' competency is resolved.”

Honken, a meth trafficker, received the death penalty for the 1993 execution-style slayings of two sisters, ages 10 and 6. He received three life sentences for the killings of their mother, as well as the murder of her boyfriend and another drug-dealing associate of Honken's.

His attorney, Shawn Nolan, said his capital murder trial was replete with flaws. "Despite these flaws, each of which implicates essential constitutional guarantees, the government now seeks to execute Mr. Honken, a deeply remorseful and devout Catholic and loving father of two children," Nolan said.

Nelson pleaded guilty in 2001 and was sentenced to death for the murder of a 10-year-old girl, whom he kidnapped and raped before strangling her. His execution is scheduled for Aug. 28.

The Justice Department also announced more executions would be set "at a later date."

"Over the past few months, our nation has faced a seemingly endless stream of death, suffering and loss. Hundreds of thousands of lives have been lost in the coronavirus pandemic, and thousands more have taken to the streets to condemn the death-dealing racism that is pervasive in our criminal legal systems and structures," Vaillancourt Murphy said in her statement.

"It is difficult to comprehend why, after everything our country has been through, the federal government is bent on taking more life."