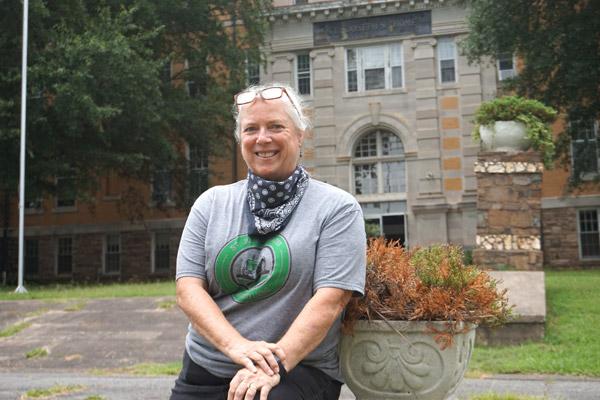 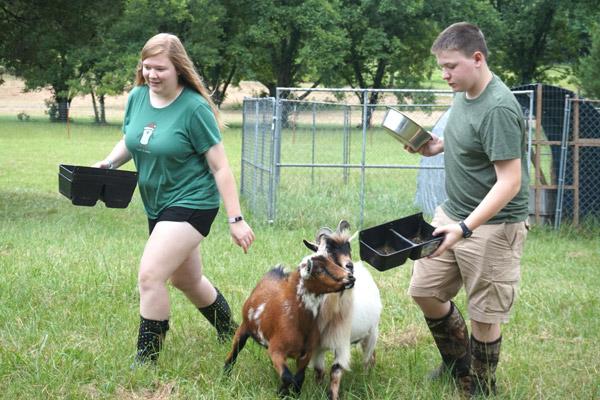 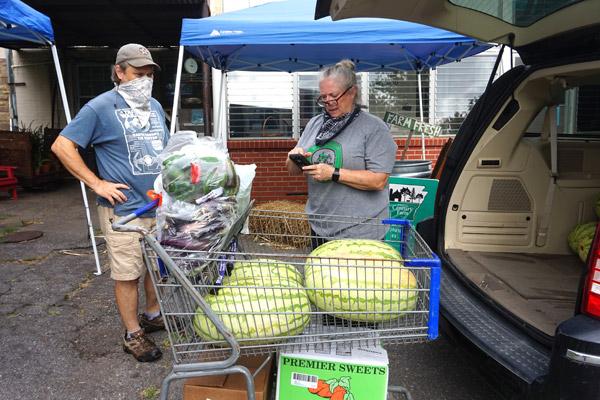 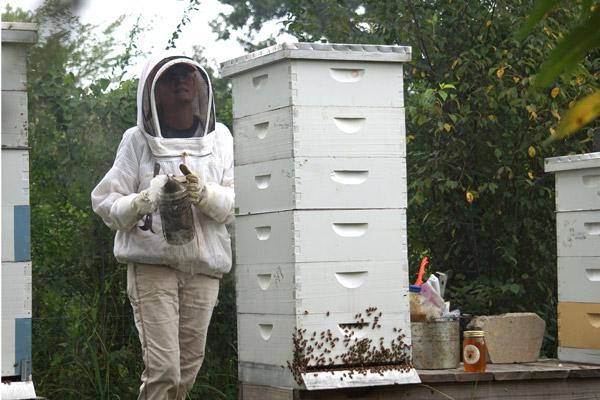 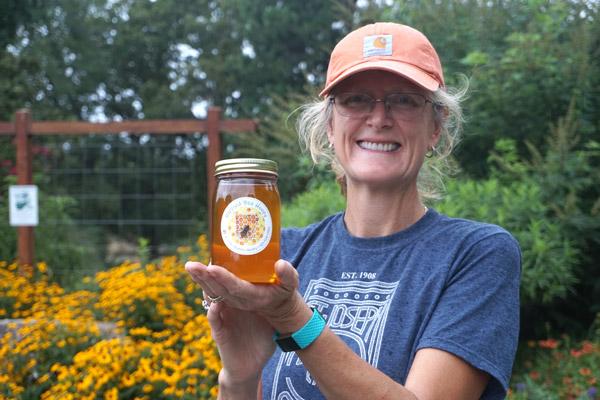 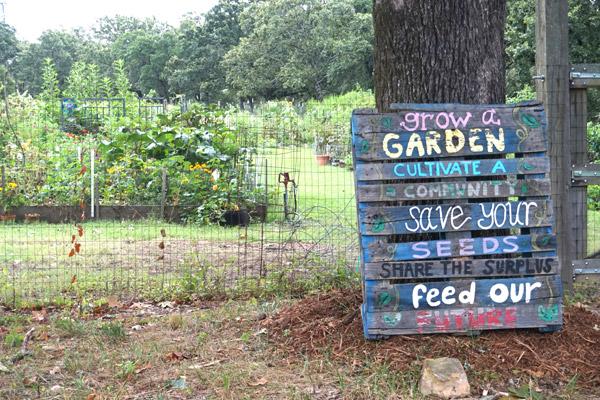 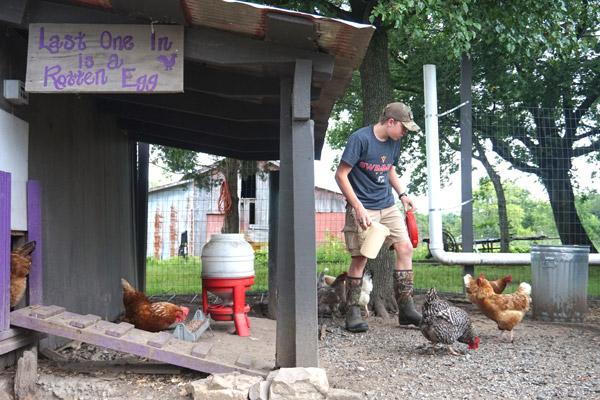 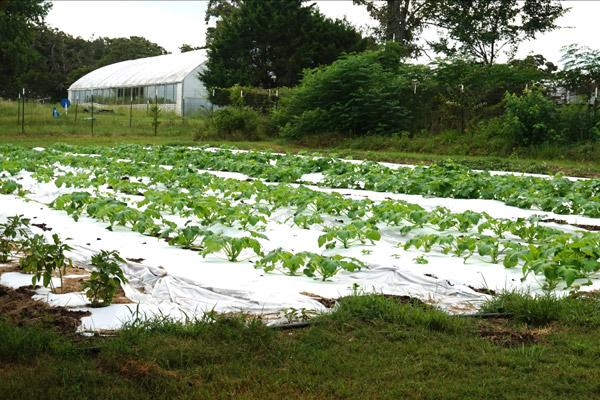 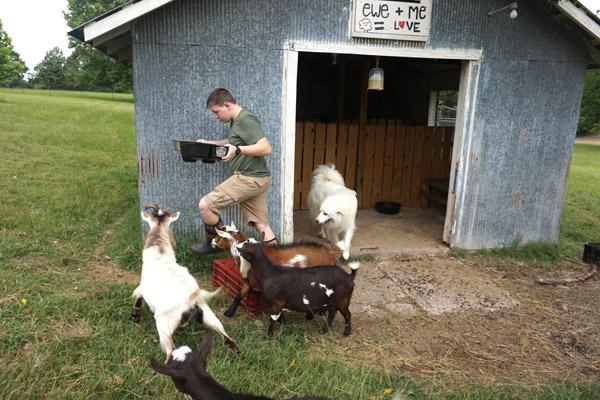 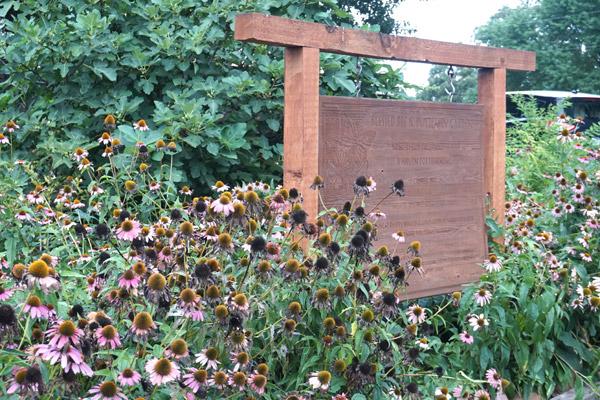 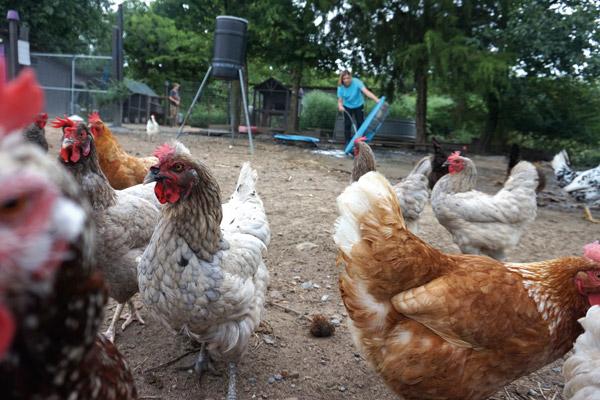 Aprille Hanson
Callie Messick, 15, cleans out a pool for the chickens and ducks in an enclosure at St. Joseph Center of Arkansas in North Little Rock July 31. The Messick family, parents Lewis and Elizabeth Messick and their four children, are among the 50 regular volunteers who dedicate their time to the nonprofit, which has rented the Diocese of Little Rock property the past 10 years. In that decade, the center has grown in its agricultural services to the community.

Aprille Hanson
Callie Messick, 15, cleans out a pool for the chickens and ducks in an enclosure at St. Joseph Center of Arkansas in North Little Rock July 31. The Messick family, parents Lewis and Elizabeth Messick and their four children, are among the 50 regular volunteers who dedicate their time to the nonprofit, which has rented the Diocese of Little Rock property the past 10 years. In that decade, the center has grown in its agricultural services to the community.

When the nonprofit St. Joseph Center of Arkansas signed a 50-year lease with the Diocese of Little Rock 10 years ago, they had a motto: “We will not quit before the miracle.”

“I truly believe the whole project is a miracle,” said executive director Sandy DeCoursey, a parishioner at St. Bartholomew Church in Little Rock.

The nonprofit, established in 2008, leased the 56,000-square-foot historical building, completed in 1910, with its 63-acre property that once housed the St. Joseph Orphanage and a daycare center managed by the Benedictine sisters from St. Scholastica Monastery in Fort Smith.

In the past 10 years, the nonprofit has been growing … and growing.

Today, thanks to steady grants, fundraising and volunteers, the center manages an assortment of operations on its property:

“I think we were naive enough to believe it would,” DeCoursey said of the belief from the beginning the center would be prosperous.

When the nonprofit took the reins, the plan was to be a one-stop shop for charitable activities, with the hope that charities would rent space within the building. Total building renovations were estimated to cost $14 million in 2014, beyond the immediate reach of the organization. The nonprofit has not undertaken any major renovations but continues to make small repairs and improvements.

“People these days kind of like air conditioning,” DeCoursey admitted, and even today, the building has air-conditioning only  in the kitchen and chapel.

While it still rents spaces for retreats and events, the building is more popular in the winter months. The center pivoted to nature and farming, contemplating the idea of “how this earth works and what our role is in it,” DeCoursey said.

For 2019-2020, St. Joseph Center received a FarmCorps program grant -- after a planning grant the previous year -- and launched an Americorps State program Full Circle FarmCorps, with service members working at seven different locations in Pulaski County. When the COVID-19 pandemic left school gardens abandoned, more members were added -- 20 total -- supporting gardens and providing nutrition education, with 675 service hours from June through September. The grant has been renewed for 2021.

Recently, DeCoursey said a leader for cattle operations was also hired to care for their 15 head of cattle and “we’re slowly restoring the pastures.”

“It’s all about the people … taking ownership and helping start and run programs,” DeCoursey said of the 50 regular volunteers.

Ruth Landers and her husband Scott, parishioners at St. Anne Church in North Little Rock, established the St. Joseph Apiary four years ago, with about half a million bees swarming the 16 hives today, producing Blessed Bee Honey. They educate local beekeepers on maintenance and threats to hives. As part of the Central Arkansas Master Naturalists, Landers helped create the Blessed Bee and Butterfly Pollinator Garden in 2017. In 2018, it was established as an official Monarch Waystation. She also tends to the community garden beds and is a master gardener.

“When you plant a seed, you have faith and believe in it and hope for good things and I think there’s still a lot more that St. Joseph’s can do,” Landers said. “We’re trying to improve on food supplies for local people. I think there’s a lot of food injustice; we’re working on getting food to people who need it. I guess being out here is good for your soul too, whatever your faith.”

Jan Pownell, a parishioner at Immaculate Conception Church in North Little Rock, started the Animal Ambassadors program three years go, with about 20 families rotating morning, afternoon and evening shifts to care for the center’s 60 chickens, 20 ducks, two sheep and six goats, as well as Peaches, a Great Pyrenees dog that protects the goats. It’s hands-on education for children and retirees.

The COVID-19 pandemic has disrupted group programs and events that would bring in rental revenue and fundraising opportunities, like the Lettuce Grow dinner and auction. While it is rescheduled for September, DeCoursey is doubtful they’ll be able to host it, even though the event accounts for about 40 percent of their annual income.

The Farm Stand, though now running with social distancing, switched to online pickup, which is still offered. At the end of July, the center debuted the St. Joseph Center membership program, stjosephcenter.org/join-the-farm, for $120 annually, which includes a membership car decal, access for eight people to the center grounds for picnics, walks and visits with the animals, five percent discount on Farm Stand purchases and special events, free building tours and special invitations to member events and sales.

“The farm is doing well, the Farm Stand is doing well. We’re going to be able to survive this, but it’s hard to know how long you’ll be able to go. But I know God has a plan,” she said.

Throughout the next 10 years and beyond, DeCoursey hopes to focus on the next generation of leaders for St. Joseph Center.