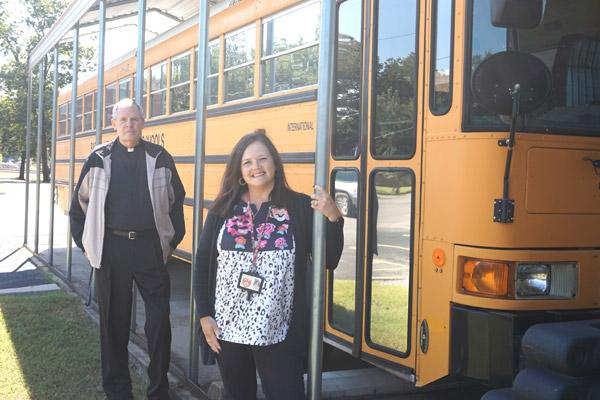 Aprille Hanson
Sacred Heart pastor Msgr. Jack Harris and school development director Alisha Koonce stand by the 20-year-old bus used by the pre-K-12th grade school in Morrilton. The school plans to purchase a new bus, work on other improvement projects and save for the future thanks to a $1.6 million bequest from 1941 graduate of Sacred Heart School John Lachowsky.

Aprille Hanson
Sacred Heart pastor Msgr. Jack Harris and school development director Alisha Koonce stand by the 20-year-old bus used by the pre-K-12th grade school in Morrilton. The school plans to purchase a new bus, work on other improvement projects and save for the future thanks to a $1.6 million bequest from 1941 graduate of Sacred Heart School John Lachowsky.

John Lachowsky graduated from Sacred Heart School in Morrilton 79 years ago, but his impact will stretch well beyond his time at the school thanks to his $1.6 million bequest, the largest single gift in the school’s 141-year history.

“It really came out of the blue for us. None of us were prepared for it,” said Alisha Koonce, the school’s director of development. “... It’s extremely impactful. It really gives us the opportunity to undertake some projects that we weren’t going to be able to in the near future.”

Lachowsky, 96, lived in Hot Springs Village and did not have a wife and children. He was born in Morrilton, served in the military, attended Sacred Heart Church and was buried in the parish’s cemetery, according to his obituary. The school said it did not know much about Lachowsky and his life since he moved away from Morrilton. However, the 1941 Sacred Heart yearbook revealed more about his time as a student at Sacred Heart. He was active in all sports, but it noted he was captain of the high school football team and played third base for baseball. His favorite phrase was “Yeah, that’s right” and he thought “dancing would be a great career,” the yearbook stated.

In his senior personality profile, it stated, “Tall, dark and handsome; very fond of sports; never missed a day of school -- and never will; hopes to make ‘Heaven’ the same way. ‘Patience is the key to success.’”

“I deeply appreciate that someone that has been gone from the community as long as John and his family would remember the role the school and parish meant in his life in the past and still support us,” Msgr. Harris said.

Koonce, who did not know him personally, said he was not involved at the school as an alumnus, making the gift a complete surprise. They learned about the bequest last year but have worked on making it public since last month, Koonce said.

“What an impact Sacred Heart Catholic School must have had on Mr. Lachowsky, remembering us in this way after 80 years have passed,” stated a news release from the school.

According to the news release, in order to both sustain the school in the future and to attend to current needs, the school will use the money in the following ways:

Sacred Heart School is one of only two parishes in the state that supports its own K-12th grade school. It has 225 K-12 students and 28 students in pre-K. Koonce said like many Catholic schools, they’ve struggled with enrollment, but have remained steady. The gift will support enrollment, retention of teachers and bettering the school.

Msgr. Harris cautioned that despite the large bequest, it does not mean the school is set for life.

“It’s a scary thing to me when a gift like that appears because some people think ‘We’re rich, we don’t have to support the program.’ We still need to pay tuition, we still need to have our stewardship envelopes turned in on Sunday, we still have to operate. This is not operating money, this is money to do big issues we need to do and go into the endowment for the future,” he said.

Because of the COVID-19 pandemic, the school has lost some fundraising opportunities, including a canceled golf tournament and a scaled-back Oktoberfest Oct. 3. Koonce said Oct. 1 that fundraising was going well leading up to Oktoberfest, but “the goal we set was half of what we normally raise.”

Koonce said each project and investment decision was considered carefully, a way to honor Lachowsky’s gift and legacy.

“We’re really trying to be thoughtful about that. Where are the needs? Where are we going to put that?” Koonce said. “Sacred Heart pinches every penny and stretches every dollar, like with every Catholic school. There’s no extravagance here.”

Be vulnerable, do not hide emotions in prayer