St. Joseph School initially given a Blue Ribbon in 2014 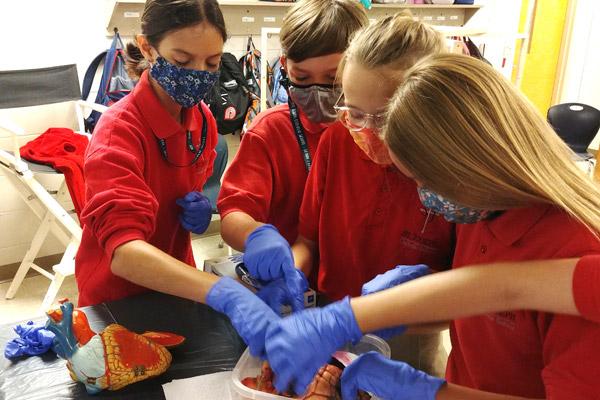 Read more about the school's history with the Blue Ribbon award:

St. Joseph School in Fayetteville made history this year, becoming the first non-public school in Arkansas to be twice recognized as a National Blue Ribbon School. The award is presented by the U.S. Department of Education.

St. Joseph School was one of 367 schools nationwide so designated in 2020, and one of just five Arkansas schools to receive the award.

“It’s an opportunity for us to be recognized on a national level, so that’s something that stands out as being very important for us,” said principal Jason Pohlmeier. “We believe that Catholic education is extremely important and accomplishes lots of great things. To be able to be recognized at the highest level is really meaningful and as a Catholic school being recognized by the U.S. Department of Education is really significant.”

The National Blue Ribbon Schools program, which launched in 1982, recognizes the best of the best in American elementary, middle and secondary schools. Awarded schools hold the designation for six years, then may reapply for Blue Ribbon status. To date, almost 10,000 awards have been made to more than 9,000 schools coast to coast.

St. Joseph School was first awarded Blue Ribbon status in 2014, the first year Pohlmeier sat in the principal’s chair. He said an early goal of his administration was to repeat their Blue Ribbon status when the next application window came up in 2020.

“All of the applications and stuff for the first award had been done before I got here, so it stood out as a goal for me,” Pohlmeier said. “It was a standard to set for myself to make sure that I did my part to help the school maintain the high standards that it had set for itself. It gave me big shoes to fill.”

“The following year, the assistant principal left, and the new assistant principal and I took it upon ourselves that we’re going to seek to repeat. We had five years to maintain that standard; it wasn’t just that we’ve got to keep up the standard for a couple of months and then we’ll get it again. We had to set a high bar to maintain that standard.”

The award winners were announced in September and celebrated at St. Joseph School by a Zoom video call Oct. 16. Pohlmeier led the call and was joined by students in the classroom and logging in from home. A collection of dignitaries lent their congratulatory remarks to the students, including local and state politicians and school and diocesan leadership.

“I want you to know how very, very proud I am of you today,” said Bishop Anthony B. Taylor during the call. “I recognize that you really have to work really hard in your studies. And I find that a lot of times, somebody feels like they’re really good in math or they’re really good in reading, but this award says that you all are in the top 15 percent in both.”

“Your school has been a very solid school all along. And that makes me so proud of you and your teachers. You all are gaining a really solid foundation for the future.”

“This is a great day to be a Panther,” exclaimed U.S. Rep. Steve Womack, who came to the school in person for the celebration. “Think about this: How many schools have never, ever received the Blue Ribbon award? Far more than those that have. Most schools never get to be a Blue Ribbon school.”

Pohlmeier said besides being a point of personal and school pride, Blue Ribbon status also plays a practical role in the St. Joseph School environment, from marketing to inspiring teachers to introduce innovation and creativity into the classroom.

“Every (prospective) family that comes in to visit our school comes in having done their homework in different ways. Occasionally, we get someone who works in education and knows what Blue Ribbon is. It speaks for itself,” he said. “The majority of people don’t know what it is until I share it with them. It’s significant, because when those families come in, they’re trying to make a decision for the education of their child. They want to get that decision right no matter what and (the designation) certainly speaks as a measure of the quality of the school that they’re getting.”

“For our teachers, it speaks to the point of sustained excellence. It’s definitely a feather in their caps of the quality education that they’re providing, because they’re the ones in the classrooms with the kids every day accomplishing those things. I think it is really meaningful right now with everything that’s going on with COVID. Teachers are being asked to do things they’ve never done before, doing more work and harder work than they probably have ever done. So, for our teachers, this is a really good validation.”

Read more about the school's history with the Blue Ribbon award: