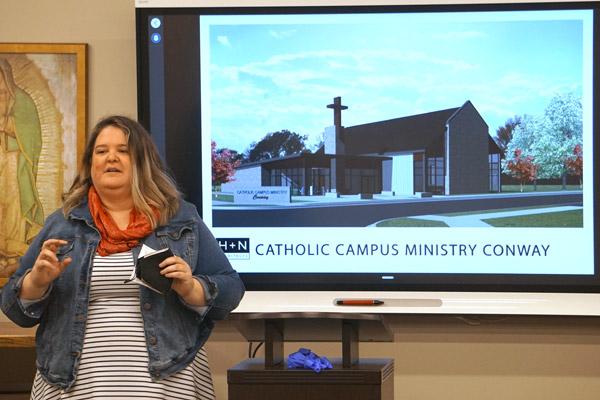 CONWAY -- Savanna Gauthier admits she didn’t truly know her faith when she came to the University of Central Arkansas.

“I didn't even own a Bible,” the 21-year-old Catholic college student said in the small gathering of people at St. Joseph Church’s Spiritan Hall in Conway Oct. 27 to share about the impact Catholic Campus Ministry has made. “And then when I joined my first (CCM) small group, I came in and I realized how much more to the faith there was than I knew about.”

Since then, she has led one of those small groups and a women’s group and is armed with a solid faith foundation in her senior year.

“I've been here and learning so much about my faith, about who I am as a person and now I’m going to be able to take that with me when I graduate,” Gauthier said.

“This is a once-in-a-lifetime thing, you know, we're not going to build another. This is going to last 50 years or 100 years. So we want to do it right the first time,” said Deacon Richard Papini, founding director of Conway CCM for 21 years. “... We're hoping that this new facility is going to be a draw, that people would want to see what's happening in this building. Once they get in there, hopefully, their hearts will be touched. And they'll say, ‘I want to be a part of this. I want to take hold of my Catholic faith.’”

Architect Joanna Nabholz discussed the key features planned for the 7,425-square-foot building across from campus at South Boulevard and Baridon Street, diagonal from its current rented building. It will include a 160-seat chapel, confessional and sacristy; a large gathering space; an 80- to 100-seat dining room; commercial kitchen; and outdoor gathering space and dining area. Glass window walls around the gathering space, offices and some in the chapel will be used to create an inviting atmosphere.

“We wanted to kind of mix the feeling of like it’s a church with it’s a college space,” said Kasey Miller, CCM campus minister for six years. “We're mixing a lot of bricks and wood and that kind of church feel with more of that industrial college feel.”

The goal is to break ground in fall 2021 and have it built by May 2022 in preparation for the fall 2022 semester. St. Joseph parishioner John Nabholz is chairman of the 10-member campaign committee, along with five advisors including Liz Tingquist, diocesan director of campus ministry, chaplain Msgr. Jack Harris and Papini.

Miller said there are about 42 new or transfer students who have registered for CCM this fall, lower than normal because of the COVID-19 pandemic. The lower turnout was expected as college students are taking most of their classes online, and Hendrix is completely virtual this fall.

Last year, there were 148 registered, with seven small groups, more than 15 ministries and programs, 23 student leaders and 20 students in formation with the ministry staff, according to campaign materials. CCM also hosts annual mission trips and retreats.

In the past 21 years, 30 students have joined the Church, an important achievement when other Protestant campus ministries have more staff and larger worship spaces, including Baptist Campus Ministry, which is also building a new center next to the planned CCM building.

When the ministry began in 1999, it was housed in a small house at 2204 Bruce Street, seating about 50 people, where it remained until UCA bought the property last year to build an integrated health science center. The college moved the ministry to another house, with similar seating, in August 2019. The rental contract extends for about another year, Miller said.

“We’ve actually been directly told by students they have chosen to attend Mass at St. Joseph (Church in Conway) because it’s too crowded, it’s not comfortable, they can’t kneel,” Miller said. “We are literally side by side, knee to back and with that many bodies, houses are not built to temperature control that many people. We do the best we can, but sometimes it gets really, really hot or really, really cold.”

While CCM has stayed active online and the rental building is still open, the pandemic has forced the ministry to cancel most activities and Masses.

“If we had a larger space pre-COVID, we would have been able to continue to have Masses at the CCM house,” Miller said.

The campaign has already raised $1.2 million,  thanks to donations, grants and the sale of the Bruce Street property. The campaign will start its public appeal in January, reaching out to alumni who have benefited from CCM.

Father William Burmester, pastor of St. Edward Church in Texarkana and committee member, told attendees how being active in CCM his freshman year at UCA in 2006 helped foster his priestly vocation.

“You’re training leaders to go off and do that in any parish, any ministry, any profession that they have,” Father Burmester said. “So these are life-changing moments of forming people into the people that they will be wherever they go.”