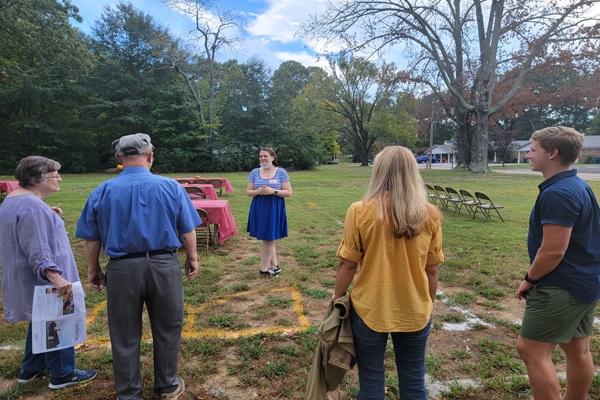 Dwain Hebda
Campus minister Kasey Miller leads guests on a "tour" of the proposed new campus ministry building in Conway Sept. 18. Wall positions of the planned building were painted on the ground, allowing donors to envision the space.

Dwain Hebda
Campus minister Kasey Miller leads guests on a "tour" of the proposed new campus ministry building in Conway Sept. 18. Wall positions of the planned building were painted on the ground, allowing donors to envision the space.

CONWAY -- Anyone who knows Deacon Richard Papini knows his star turn as a cheerleader while attending Clemson University. His born-in enthusiasm made him a natural and has come in mighty handy over the past 22 years as he’s worked to sustain optimism and energy for Catholic Campus Ministry in Conway.

Over that time, he was a sometimes-lonely voice recruiting members, dishing out Scripture and dreaming of a permanent home for the ministry which serves students at the University of Central Arkansas and nearby Hendrix College. But on a recent muggy evening, as Papini stood on a vacant lot near the university, he heard voices echoing back his decades-long cheer in the form of financial support that has nearly brought his dream of a new home to reality.

“I think (the new home) is something that we need,” he said. “I think the time has come for this to happen, and I think it’s in God’s time. It’s in his hands. We’ve got a long way to go, really, as far as we’ve only scratched the surface as far as reaching people and this is something that will help draw people in.

“When they see a building, a center that really looks like somewhere I need to go as opposed to a little old house, a little mousetrap, a cubby hole, I think it’s going to serve as a magnet.”

Plans for the new home call for a 160-seat chapel, an open dining area to seat up to 100, kitchen and gathering space that will allow for activities and attendance far and beyond what the ministry could traditionally handle.

The kickoff of the public phase of the Sacred Space, Sacred Time capital campaign, held Sept. 18 on the site of the new structure, was underscored by the news that the effort had less than $1 million left on its goal of $3 million for the new home. The generosity shown in the silent phase of the campaign, especially in the midst of a pandemic, impressed campaign committee members.

“I’m just astounded,” campaign chairman John Nabholz said. “It’s been phenomenal the number of people who have truly given beyond their means. It’s humbling to be a part of this process and to meet people of such great faith and people that share the same vision and belief as I do in how much of a change this can make in people’s lives.”

During the kickoff, the outline of the rooms was spray-painted on the ground allowing attendees to take a “tour” of the proposed building. Plans for the new home call for a 160-seat chapel, an open dining area to seat up to 100, kitchen and gathering space that will allow for activities and attendance far and beyond what the ministry could traditionally handle.

Another member of the capital committee, Mike Rasmussen, glowed as he talked about the impact he had seen a visible, inviting building can have on a campus ministry.

“My son went to college at Alabama, and Nick Saban built a student center there,” he said. “I saw what happened to the kids. I’ve been with Deacon Papini for about 15 years working behind the scenes, and I know that if we build it, they will come.”

“Now more than ever, we need young Catholics to articulate the teachings of the Church,” he said. “This new building will be a clear statement from the diocese that we are here for Christ. It’s a sign that we’re digging in our heels and saying we’re going to put a stake in the ground and we’re present. We need that so badly right now.”

Asked what message he would have for the rank-and-file Catholic to encourage them to support the campaign, Papini’s eyes flashed.

“I want them to know that the time has come, the future is now,” he said. “We have on that campus leaders who need to be evangelized, catechized for, who are going to be leaders in their Church. This facility is going to help make that happen because it’s going to give them a place that they will want to call home, a place that they’ll feel safe in, a place where they’ll have a learning and a growing experience in their relationship with Jesus Christ and in their Catholic faith.”