Preparing for the unknown: "It’s hard when you don’t know what’s going to happen" 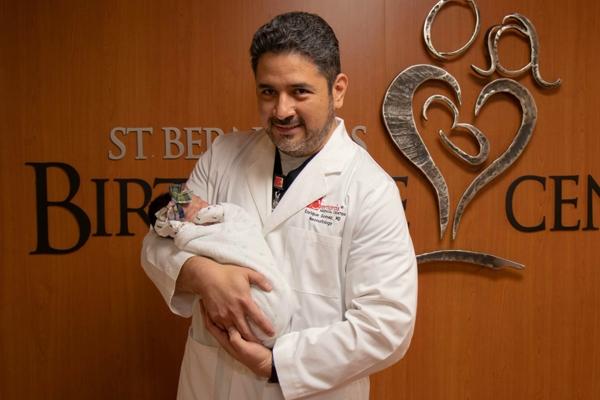 Before starting her shift at Mercy Hospital Northwest Arkansas in Rogers, ICU nurse Mandie McPhail sits praying in her car.

“For anyone that doesn’t have faith, being in this position, I think, will give you some,” she said.

Raised Catholic and exploring her beliefs amid the trauma of the COVID-19 pandemic, the 27-year-old was one of countless health care workers thrust into a worldwide health crisis.

“There would be days that we’d have upwards of five deaths in a 24-hour period,” McPhail said. “So having that every single day, having a code situation where we’re doing compressions or emergency intubating, that was happening consistently.”

As most visitors were barred from entering, health care workers at Catholic hospitals in Arkansas were risking their lives to save the most vulnerable.

Dr. Enrique Gomez, 38, a neonatologist and pediatric hospitalist for St. Bernards Medical Center in Jonesboro, moved to Arkansas in February 2020.

“‘What the hell are we going to do,’” Gomez said of his first thoughts as COVID-19 began to spread. “First it was, ‘OK, what is going to happen when we have a baby that’s positive? How are we going to treat it?’”

While experts now know the rate of COVID-19 infection in babies is low, Gomez estimated about five babies tested positive for the virus, but all lived. Patients were tested for COVID-19 initially when entering the hospital, including pregnant mothers. If a woman was positive, even with no symptoms, she was isolated.

If a mother was positive, she was not allowed to be near her baby for 14 days. Now it’s 10 days, according to Centers for Disease Control and Prevention guidelines.

“Having the conversation ‘Oh, I’m sorry you cannot visit the baby for 14 days’ ... That’s a horrible conversation. Nobody expects to go home and not see your baby,” Gomez said. “We were able to get some iPads and establish some form of communication. We were looking into getting some cameras so they could actually see the baby. But just looking at the baby is not enough.”

Gomez did not contract COVID-19, but one of the other neonatologists did. The three work five- to seven-day blocks, on-call 24-hours, making it tough when one is out sick and quarantined. None of his patients were dangerously ill from COVID-19, but the lack of information still weighs on him.

“At the beginning, it was ‘What is going to happen to my baby?’ And my response sometimes would have to be, ‘I don’t know. I sincerely don’t know.’ And that is hard as a provider; it’s hard when you don’t know what’s going to happen,” Gomez said. “It is hard definitely because as a physician, you are used to knowing things … It’s a little bit of preparing for the unknown. It’s a one-day-at-a-time kind of thing. It reminds you how fragile things are.”

McPhail would strap on her N-95 mask, face shield, shoe covers, hair net and gown each shift. At the end of each shift, nurses were required to shower before leaving.

As the clinical coordinator at Mercy NWA ICU and active charge nurse, McPhail had volunteered to work with COVID patients in the ICU. When news reports began to trickle in about the virus in China, McPhail remembers thinking: “That’s never going to happen in the U.S.”

McPhail said with each wave of infection, there were new emotions. At first, many nurses felt empowered to be making a difference. But this summer, the Delta variant ripped through Arkansas.

“It was grueling. I would summarize it as, I mean politely, and I joke when I say this, but it felt like an abusive work area. Not that Mercy was being that way toward us; it was what we were enduring and what we were going through,” McPhail said. “We’re having these increased patient loads; we’re having sicker, sicker patients. People aren’t recovering quickly. At this point, we’re losing staff, for whatever reasons. A lot of our staff nurses have PTSD from all of this. Or they had loved ones that passed away from COVID, and then here they are taking care of the same thing.”

“We have family that just berates us, that threatens us and thinks we’re the ones that are killing their family members,” she said. “And then on top of it, whether you want to get vaccinated or not is your choice, but the refusal and just some of it ignorance, I’ll say, of some people. The expectation that they’re going to come in here and (say) ‘We demand you to give me ivermectin. We demand you to give us essential oil.’ But trust in our health care professionals that are taking care of you.”

McPhail said the most traumatic moments were watching pregnant mothers die from COVID-19.

“They would only be 25, 26 weeks along, and it came between saving the mom or saving the baby. So we did have a few moms pass away, and the babies would make it,” she said.

One COVID-positive mother in her 30s, with other children, had a baby delivered around the five or six-month mark. As is common with COVID-19 patients, the mother was kept on her stomach to oxygenate her lungs. When patients are flipped over, their heart rate can drop, and lifesaving measures, like chest compressions, are needed. McPhail explained the disease causes the lungs to be “very stiff and inflamed,” making the ventilator a last resort to open the lungs. When a ventilator is disconnected, the loss of pressure can cause air sacs in the lungs to burst and hemorrhage.

“So while we’re giving her rescue breaths, blood’s spraying everywhere. We’re in our full gowns, got our shields on, and the husband’s by her side holding her hand. And while we’re doing compressions, I don’t think there’s a single dry eye in the room,” McPhail said. “And after that, just the sight of that was enough and was heartbreaking enough, but at the end of it all, there’s no time to grieve. We had five minutes. The chaplain just happened to be walking by; he just put his arms on us. We sat outside the room in a circle for a few minutes. He prayed. And we went on about the day and started admitting more patients. You don’t get that time to process, and then you have to go on. That scene was traumatic enough, but it was that experience every single day.”

“I walked to my car, and I stood there. I just laid my head on the steering wheel, and I cried. And I think those are the raw moments that you need to be like, ‘Hey, I’m still here. I’m still human.’ Like this raw emotion that tells me I’m still here. Like, I still have compassion.’”

Faith filling in the cracks

According to the state Department of Health, 49 percent of 3 million Arkansans have received the COVID-19 vaccine, which is now available to children ages 5-11. Gomez said the day he got the email, a vaccine was available, he signed up to receive it. A native of Peru, Gomez explained while the United States has ICU beds and vaccines available, other countries are struggling.

“It’s frustrating because you see the numbers. You go to the intensive care unit, and how many are there? 20. How many are unvaccinated? 20,” he said anecdotally.

“As a scientist, it is hard to have faith in something you don’t know, you don’t touch, you don’t feel, you don’t see. The thing is, there’s a lot of things in science that can’t be answered by just science. You need faith to answer. To me, faith is something that has grown to be independent of what humanity does,” Gomez said.

When people use their faith to justify a reckless disregard for scientific fact, especially when not vaccinating children, it’s tough for him to reconcile.

As the pandemic goes on, the medical community is learning more about the long-term side effects of COVID-19.

“If you get COVID, some say, ‘Oh, it’s like a cold.’ No, it’s not. You don’t even know because we are still learning” about the effects, some of which are increased asthma, lethargy, sexual dysfunction in men and impacted fertility rates, Gomez said. But, he said, there’s hope, with three billion vaccinated worldwide.

“No time in the history of humanity have we seen that response … We have to be very thankful for that,” he said.

Looking back on how the pandemic has impacted her spirituality, McPhail explained the Japanese art of Kintsugi, repairing broken pottery by filling in the cracks with gold.

“I would probably relate my faith to that Kintsugi; man, I’ve got cracks all over. This thing has worn me down; this pandemic has worn me down. I’m tired. I’m broken,” McPhail said. “Slowly, with my faith, those cracks are being filled by God. You know that happiness is slowly coming back and building up kind of a bigger, better, beautiful, stronger me.”

Catholic health care will never be the same after COVID