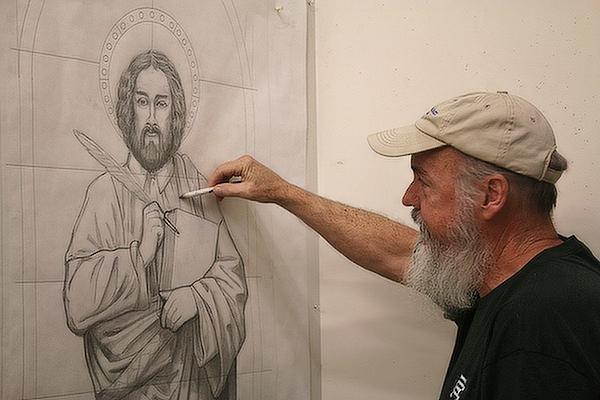 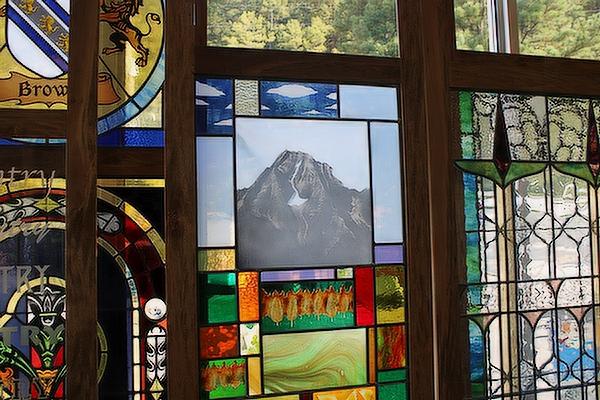 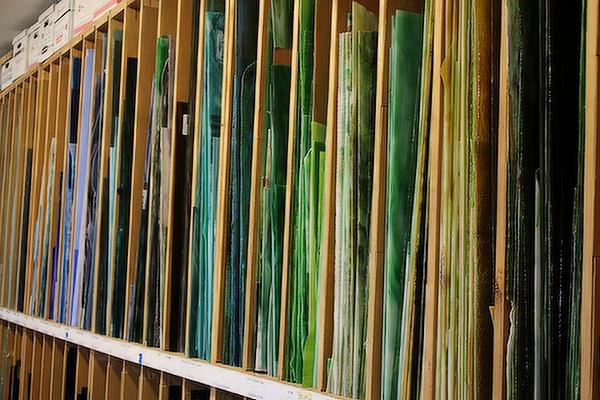 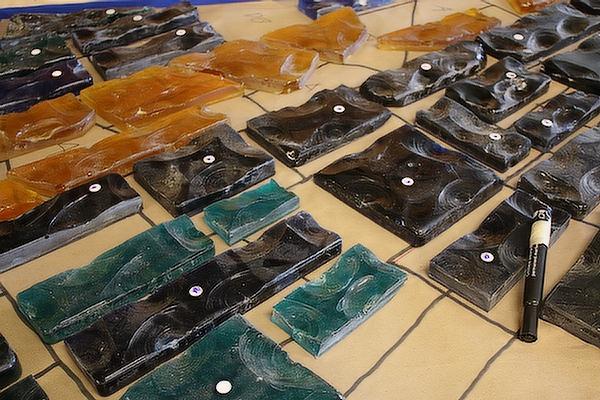 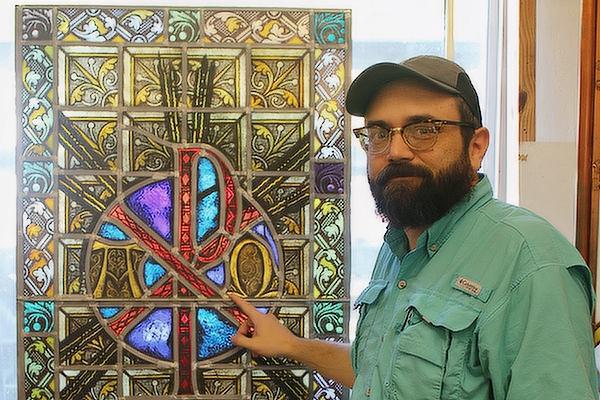 Jonathan Soos probably pays more attention to churches’ stained glass than most. Touring churches in Europe, he noticed an anomaly in a stained-glass window in Germany  —  in a scene depicting the Last Supper, there was a ham on the table.

“Why did they have a ham in this stained-glass window? I don't think Jesus would have had a big ham hock. That doesn't make sense historically,” Soos said, alluding to Jewish dietary practices. “Come to find out the local ham guild had paid for that window in the 1600s and the artist gave the patrons a little advertising. I saw that and thought it was pretty funny.”

Soos, 44, is general manager of Soos Stained Glass, a North Little Rock-based business that has been making and restoring stained glass windows since his father, David, founded the company in 1979.

Soos said churches started using stained glass in Medieval times as a way to convey the Bible to people who didn't know how to read.

“I’ve never really broken it down, but, probably, half of our business comes from Catholic churches,” David Soos said.

“They could hear a story and then put a picture to it,” he said. “The 13th, 14th century is when it really got going, but it's definitely a trade that hasn't really changed much in the last 600 years. There are some different techniques now, but essentially what we’re doing today is what they were doing 500, 600 years ago, which is kind of neat.”

Churches make up about 85 percent of the company’s gross sales and the remaining 15 percent are residential or public spaces. While the Sooses aren’t Catholic, their work and life experiences have given them close ties to the Church across Arkansas. Their work hangs in approximately 60 to 70 Catholic churches from Texarkana to Jonesboro and Little Rock to Rogers.

“I’ve never really broken it down, but, probably, half of our business comes from Catholic churches,” David Soos said.

David Soos was born in Cleveland and first moved to Arkansas during his Air Force enlistment from 1968 to 1972. While stationed at Little Rock Air Force Base, he enrolled in classes at the Arkansas Arts Center, taking an interest in stained glass. After his discharge, he returned to Cleveland and took classes in the 1,000-year-old art form.

He returned to the Natural State in 1974, working for Mashburn Stained Glass for four years before he opened his own shop in Levy. Since 1991, Soos Stained Glass has operated out of a 5,000-square-foot studio in North Little Rock where his team designs, fabricates, repairs and restores windows for religious, residential and public settings.

Today, David, 73, is preparing Jonathan, whom he calls “the next generation,” to take over the business.

While he doesn’t see mass expansion in the future, Jonathan doesn’t anticipate volatility either.

“It's not exactly a high-growth business, like tech companies or something like that,” he said. “It's just kind of a niche trade. Most of our customers are those with new construction or people that don't realize they need us until they have a hailstorm, or somebody throws a brick through their window, and they need it fixed.”

Jonathan Soos, who was raised in the business, attended Catholic High School in Little Rock for two years before transferring to Subiaco Academy, where he graduated in 1998. He received his bachelor’s degree from the University of the Ozarks in 2003 and bounced around from Alaska to the Gulf Coast for a few years before joining his dad in 2006.

“It's a niche kind of thing to be into, but something I'd done for years as a summer job between grades,” Soos said. “You have to apprentice to even get good at it. I had basically already done all that stuff and started working with my dad — sharing an office with him — to learn the finer points of running the business.”

Nathan Cathey, Soos’ production manager, is David’s nephew and his career in stained glass has spanned more than 30 years. Today, he oversees the day-to-day operations of the studio.

Design artist and glass painter Lynn Fitzgerald, who apprenticed with David at Mashburn, has been with the company since 1980.

Since the late 1970s, the company has grown from serving its Arkansas neighbors to becoming a regional name. In addition to Catholic churches, Soos has produced windows for Episcopal, Presbyterian, Methodist and Baptist churches, Jewish synagogues and public courthouses.

When Blessed Sacrament Parish in Jonesboro decided to construct a new church, Soos was commissioned to create a new rose window above the altar and worked with Brackett Krennerich and Associates Architects and Nabholz Construction to remove the 86-year old windows from the original sanctuary, restore them and reinstall 90 percent of them in the new $7 million neoclassical church that was dedicated in 2019.

Lisa Golden, Blessed Sacrament’s facilities manager, said one of the building committee’s goals was to make the new church feel familiar and being able to reuse the original windows was a big part of their plan.

“Anytime you have a church that has been there for so long and has so many memories  —  baptisms, weddings, funerals  —  it’s really hard to see that go away,” Golden said. “Even though you're excited about the new facility and its potential, it’s hard to let go. The committee did a really good job of combining the old into the new, and Soos’ work, using the same glass, was a really great way to do that and really helped a lot of people make that transition.”

Last month, the company installed three of the original church’s remaining windows in Blessed Sacrament’s new adoration chapel. Golden said the space wasn’t originally designed to be a chapel, but Soos was able to configure three old windows to transform the room.

“It looks fabulous and feels more like a chapel,” Golden said. “They are so talented and just a joy to work with. They really understood what we had and what we wanted to do here.”

David Soos estimates the studio has produced thousands of pieces and their reputation has earned them work as far away as Florida, where they designed and installed a wall of more than 6,000 square feet of stained glass as a backdrop at First Baptist Church in St. Petersburg, Fla.

Jonathan Soos said his most memorable project was restoring a 16-by-6-foot Tiffany window from a church in Dyersburg, Tenn.

“We had to take out a $2 million insurance policy to even touch it,” he said. “It was pretty intricate. As I was working on it, I really appreciated the craftsmanship that went into cutting each piece of glass that those guys made in the 1870s. It was a once in a lifetime job. Pretty amazing.”

Projects range in price according to size, David Soos said. A 10-foot rose window similar to the window at Blessed Sacrament in Jonesboro would be approximately $50,000 in today's market, a traditional church window featuring a saint goes for around $8,100, and most residential windows fall in a range from $750 to $5,000, depending on the complexity of the design, size and installation details.

The team is currently working on a 6-foot tall window that features St. Mark and his symbolic lion for Hope Lutheran Church in Jacksonville. Fitzgerald said he sketched a rough outline on his computer, printed a full-size image and spent six hours hand-drawing the artwork that he will use as a guide when cutting and painting the detailed sections of the image. Once glazed, the glass is fired in a kiln so that the image makes a permanent bond that cannot be scratched off.

“It should last for hundreds of years,” Fitzgerald said. “We fabricate each piece with the goal of ensuring its survival and enjoyment for generations to come.”

That impact makes it all worthwhile for David.

“It’s satisfying that you feel that you're providing something, a service, to people to reinforce their religious faith and enrich their lives.”