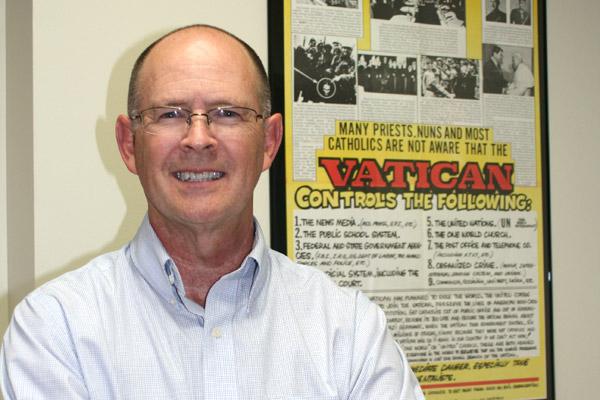 Aprille Hanson
UCA professor Dr. Kenneth Barnes researched the kind of anti-Catholic sentiments displayed in the more-recent poster hanging in his office for a new book about anti-Catholicism from 1910 to 1960.

Aprille Hanson
UCA professor Dr. Kenneth Barnes researched the kind of anti-Catholic sentiments displayed in the more-recent poster hanging in his office for a new book about anti-Catholicism from 1910 to 1960.

CONWAY — While growing up in rural Conway County, Kenneth Barnes watched his older brother John make a drastic decision — he converted to Catholicism in the late 1960s while still in high school, despite their Baptist upbringing.

This led to what Barnes called “the most traumatic event of my childhood,” listening to heated religious debates.

Those experiences led to his fourth book, “Anti-Catholicism in Arkansas: How Politicians, the Press, the Klan, and Religious Leaders Imagined an Enemy, 1910–1960.”

“That kind of anti-Catholicism I wrote about was really a part of my own family history and my childhood,” said Dr. Barnes, 60, who has been a professor at the University of Central Arkansas in Conway for 24 years.

His parents, both teachers, grew up during the height of anti-Catholic rhetoric.

“They were lovely, generous, kind-hearted Christian people. But yet they had these blinders” of prejudice he said, adding that in their later years, his parents became close with the priests at St. Peter the Fisherman Church in Mountain Home, where John is director of music.

The 270-page book is dedicated to John and his wife Lynda, who is the parish’s finance secretary. Kenneth Barnes, who teaches history, converted to the Lutheran faith about 40 years ago before marrying his wife Debbie.

Barnes said readers may be surprised to learn how significant anti-Catholicism was at the time, “maybe even as powerful of a prejudice as the race prejudice was.”

The book is divided into seven chapters spanning 50 years of different forms of anti-Catholicism.

On the cover is the “Whore of Babylon,” an image used on the masthead of the Liberator, an anti-Catholic newspaper published in Magnolia from 1912 to 1915. In the prelude, Barnes explains it’s derived from Revelations 17, which talks of a woman sitting on a seven-headed, horned beast and holding a cup of sins. The cup is drawn similar to a Communion chalice.

Despite the “prudish and Victorian” views that many Protestants at the time preached, Barnes said popular lectures were focused on how Catholic sisters were being used as sex slaves for priests or other “bizarre” sexual lies.

“Almost it was pornographic,” Barnes said.

An example, Barnes wrote, was an 1836 book called “The Awful Disclosures of Maria Monk,” which was reprinted several times into the 20th century. It was a bestseller, second in the number of books sold to “Uncle Tom’s Cabin” in the Antebellum Era.

The story, proved by scholars to be a fabrication, tells about Maria who was raised Protestant but entered a convent.

“Maria quickly learned that the convent was complete with hidden doors and a secret passageway to the seminary to facilitate sexual liaisons with clergy. For nuns who did not willingly submit to priests’ sexual demands, there were hidden prison cells and torture chambers,” Barnes wrote.

The book can still be found online today.

“People would refer to this on the floor of the legislature when they were debating the Posey Act,” anti-Catholic legislation passed in Arkansas in 1915 that allowed forced inspections by authorities of places like convents and monasteries, he said.

Sexual paranoia turned to anti-immigration and anti-foreigner sentiments with the rapid rise of the Ku Klux Klan in the early 1920s in Arkansas, which helped spread more hatred about Catholics.

After John F. Kennedy was elected as the first Catholic U.S. president and took office in 1961, many Protestant fears were eased when he drew a hard line of separation between church and state.

“It is really clearly the beginning of the demise of much of that anti-Catholicism,” Barnes said.

Barnes said while his research uncovered many interesting stories, he enjoyed writing the first chapter, which includes a dramatic murder and a famous Protestant vs. Catholic debate. To educate about true Catholicism, Father Boniface Spanke, a priest from Subiaco, traveled around Arkansas for about three weeks in a horse-drawn wagon dubbed the “Gospel Wagon.” Barnes details a public, two-week debate in 1914 between Father Spanke and anti-Catholic Rev. Otis L. Spurgeon of Iowa in Morrilton that gained national media attention and drew about 2,000 people.

The book, which will be released Nov. 1, can be ordered for $34.95 through the University of Arkansas Press (uapress.com) or pre-ordered at retailers.

While the anti-Catholic ignorance that seeped into the culture seems outlandish, Barnes said that same fear of those that are different still permeates society, pointing to anti-Muslim or anti-Hispanic rhetoric prominent today.

“When we look back at this prejudice and it seems so out of date and hard to get, it begs us to examine our own prejudices we might have a harder time recognizing,” Barnes said. “That’d be true for Protestants, Catholics and secular people as well.”

Arkansas site may bear a cross from 1541 expedition

Laudato Si’: On care for our common home